Rains: It won’t happen – but Boise State should stay home and play in the Potato Bowl this year 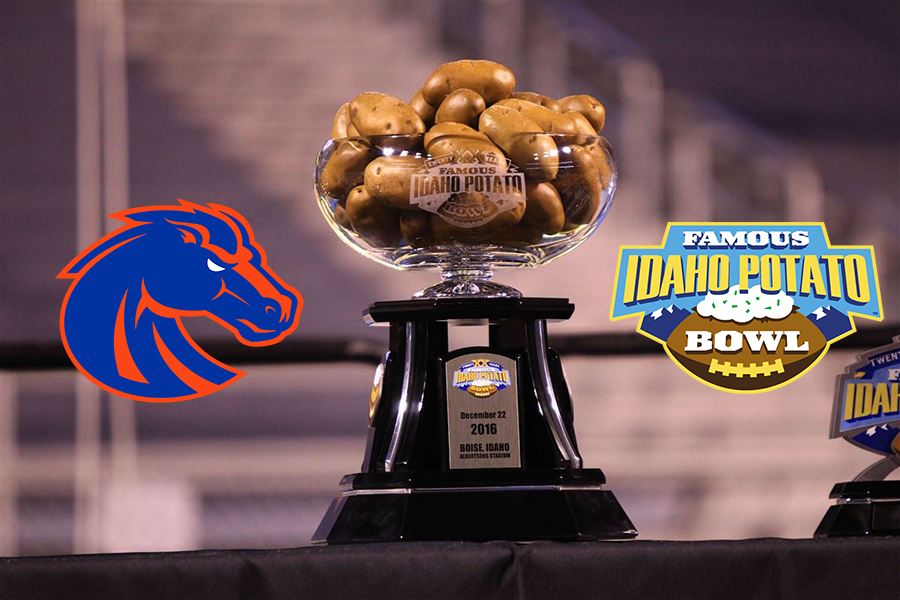 Let’s get this out of the way first: Boise State won’t be playing in the Potato Bowl. It’s not going to happen.

But that doesn’t mean it should be – especially this year.

Boise State hasn’t played in the Boise-based game since it was the MPC Computers Bowl back in 2005. That’s the Boston College-Matt Ryan game in which the Broncos tried to mount a late comeback but Jared Zabransky was picked off in the end zone in the final minutes of a 27-21 loss.

But in each of the 15 years since the 2005 game the Broncos have gone elsewhere. Three times they played in the Fiesta Bowl, five times in the Las Vegas Bowl as Mountain West Champions, twice in the Poinsettia Bowl and once each in the Hawaii Bowl, Cactus Bowl and First Responder Bowl – if that one even counts.

The last bowl appearance in Boise coincided with Boise State’s rise to national prominence. The Broncos won the famed 2007 Fiesta Bowl over Oklahoma the next season and never looked back.

There haven’t been too many seasons where playing in the Potato Bowl made sense. It’s fairly low on the Mountain West bowl pecking order, it features an average opponent from the MAC and typically gets a poor TV slot – as is the case with a Tuesday, Dec. 21, 1:30 p.m. MT kickoff this year.

The only year it might have made sense was in 2013 when the Broncos went 8-4 in the regular season before coach Chris Petersen left and the Broncos looked disinterested in a Hawaii Bowl loss to Oregon State.

Playing in the Potato Bowl made little sense for the Broncos in nearly each of the past 15 years.

It makes perfect sense this year.

For starters, Boise State went 7-5 this year – losing five games in the regular season for the first time since 1998. It’s been historically the worst season in two-plus decades to this point.

There are FIVE Mountain West teams with better records than the Broncos. San Diego State (11-1) and Utah State (9-3) will meet in the Mountain West title game, with the winner landing a spot in the new LA Bowl at Sofi Stadium on Dec. 18. The loser still will be slotted above the Broncos.

Air Force (9-3), Fresno State (9-3) and Nevada (8-4) all did better than Boise State in the regular season as well. Those teams should get preference over the Broncos.

Mountain West contracted bowls include the LA Bowl, New Mexico Bowl (Dec. 18), Potato Bowl, Hawaii Bowl (Dec. 24) and Arizona Bowl (Dec. 31). Once the champion goes to LA, the other bowl bids are assigned based mostly on the best matchups for television. Location and travel also is considered.

Another potential option is the Guaranteed Rate Bowl in Phoenix (Dec. 28). The Mountain West has a backup agreement to send a team there should the Big 12 and Big 10 not have enough teams to fill the slot. That could be possible depending on what happens with the championship games this weekend and who gets into the College Football Playoff.

Disclaimer: Boise State could also end up in a totally random bowl nobody is talking about. ESPN owns 17 bowls and will often trade conference slots and assignments to help create the most attractive matchups and storylines for TV ratings.

Anybody up for Boise State and Auburn in a bowl game? Won’t happen, but would be fun.

So where will the Broncos land? Best guess is one of the bowls in Dallas. The Broncos do a lot of recruiting in Texas, have strong ties to the Dallas Cowboys and would likely have a shot to play a decent opponent.

But that’s not where they should go, at least this year. If there was ever a time to take the Potato Bowl bid and finish the year at home, this would be it.

Boise State lost three home games in a row earlier this season for the first time since their first FBS season in 1996. The Broncos are just 3-3 at home after previously putting up the top home winning percentage in the country from 2000 to 2020.

Why not let the outgoing seniors have one final chance to win on The Blue? It’s been a weird, tough year at home, and it’s the perfect chance to let seniors like Kekaula Kaniho, Riley Whimpey and Khalil Shakir finish their careers with a proper sendoff on the blue turf.

Sure a Mountain West title game or a New Year’s Six game would have been a better finale. But is playing in the Potato Bowl really worse than the New Mexico Bowl or Arizona Bowl? The Hawaii Bowl wouldn’t be a bad option, but it’s costly and wouldn’t be easy for fans to travel to on short notice.

What if ESPN could trade out the MAC slot and get the Broncos a better, more attractive opponent for the Potato Bowl like Memphis – or even a rematch with UCF? Would that be enough to sway the Broncos into staying? Probably not – but it should.

The Broncos have thumbed their noses at the hometown bowl for 15 years and it made perfect sense almost every time. But it doesn’t this year. Boise State is desperate for cash, and could save a significant amount of money by eliminating the cost involved with sending the team on the road for a week – and for unused tickets.

And are we even sure a ‘bowl trip’ somewhere will be the same as previous years? Due to COVID most bowl events probably aren’t happening, or at least won’t be as plentiful as before. I get wanting players to experience a bowl trip to finish the season, especially since the Broncos elected not to play in a bowl game last year. And that’s why the Broncos won’t play in the Potato Bowl.

The Broncos will probably end up in Dallas, or maybe Hawaii. One hope: it will be a bowl game before Christmas – the Frisco Bowl would be perfect – so the players, coaches, staff, media members and even fans can be with their families for Christmas.  The First Responder Bowl and Arizona Bowl both have terrible dates between Christmas and New Years.

Boise State could stay home in the Potato Bowl and save a lot of money, play a final home game for fans and allow the seniors to have one more home game to end their time with the Broncos in style. It makes all the sense in the world.

It should happen – but it won’t.