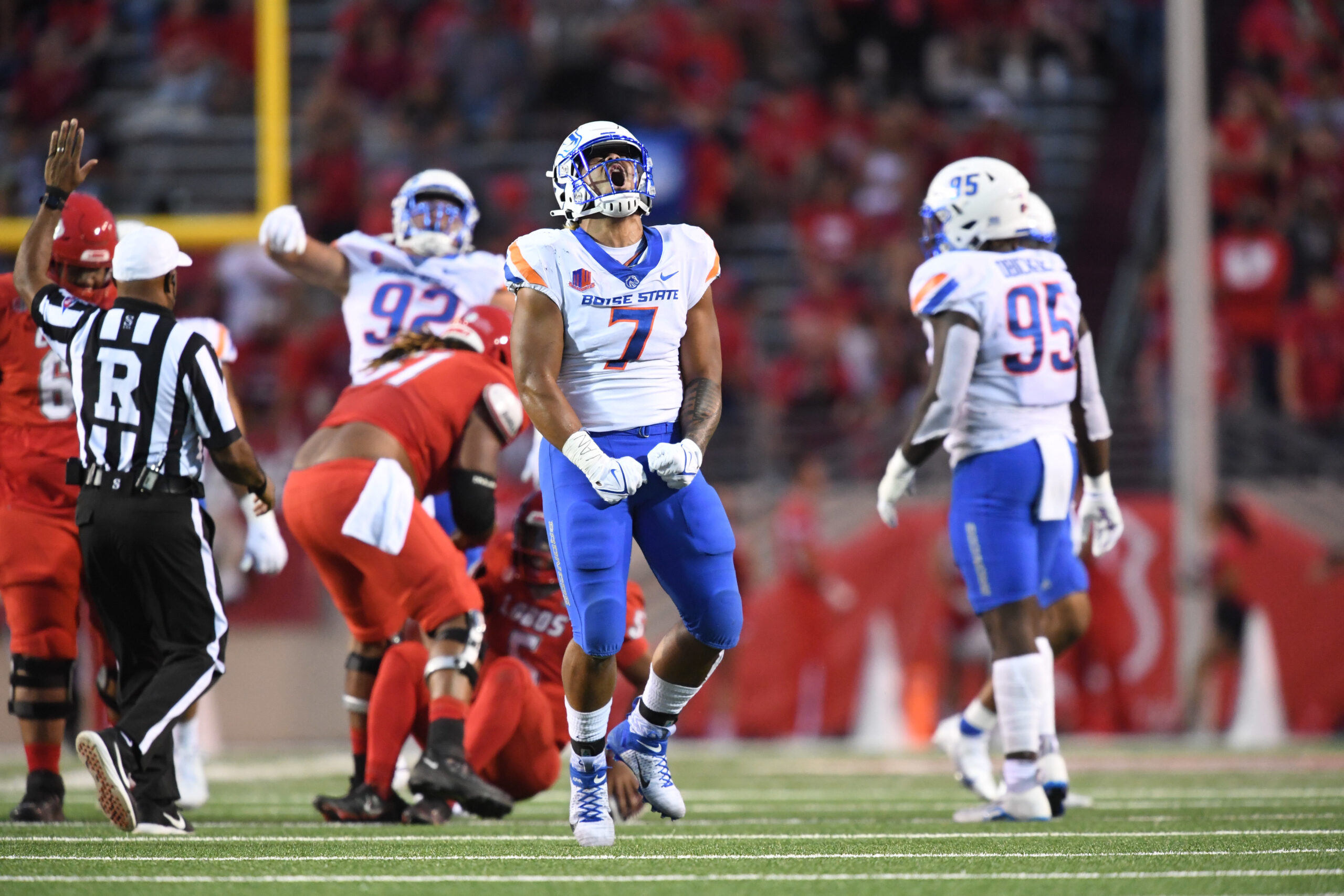 Boise State linebacker Ezekiel Noa celebrates after a big tackle in the first half at New Mexico on Nov. 9. (Photo by Boise State Athletics)
By B.J. RainsSeptember 9, 2022

Boise State (1-1) won its conference opener for a 23rd straight year and will now get set for the home opener at Albertsons Stadium on Saturday, Sept. 17, against UT-Martin at 2 p.m.

Bachmeier was 16-27 for 170 yards and had one interception to go along with the three touchdowns. You can read more about Bachmeier’s game here.

But the big story was Boise State’s defense. The Broncos allowed just 64 yards in the first half and held the Lobos to 123 yards for the game.

Boise State also had six sacks and 12 tackles-for-loss, a week after recording no sacks in a season-opening loss at Oregon State.

“Really proud of the way the defense played,” coach Andy Avalos said. “I think the defensive line did a really good job. Tonight we were able to land on the quarterback.”

The Broncos led 10-0 at the half but scored early in the third quarter on a blocked punt from Andrew Simpson and a recovery in the end zone from Deven Wright to go up 17-0. They cruised to a 17-point win to get in the win column for the first time in 2022.

“It feels good to be in the W category,” said wide receiver Latrell Caples, who had two touchdown catches. “it doesn’t matter how it comes. A win is a win at the end of the day.”

Both teams went 3-and-out on their first two drives as the teams combined for 12 plays for 3 yards.

But Boise State finally got the offense going on its third drive of the game, thanks to a nice mix of George Holani runs and Bachmeier passes. Bachmeier lofted a perfect deep ball to Cole Wright for a 47-yard completion to push the Broncos into New Mexico territory, and Holani converted a fourth down run thanks to blocking by defensive tackles Herbert Gums and Scott Matlock.

The Broncos finished the 8-play, 91-yard drive with an 18-yard touchdown pass from Bachmeier to Latrell Caples to take a 7-0 lead with 14:53 left in the second quarter.

The Boise State defense came up with a big fourth down stop on a tackle from Scott Matlock to keep the Lobos off the scoreboard in the second quarter.

Bachmeier then led the Broncos on another scoring drive, this time a 48-yard field goal from Jonah Dalmas to extend the lead to 10-0 with 6:57 left in the half. The Broncos appeared to have first-and-goal after a completion to Caples, but right tackle Cade Beresford was called for holding and the Broncos were forced to settle for the long field goal.

After the punt block and return for a touchdown, the Broncos pushed the lead to 24-0 on a 3-yard pass from Bachmeier to George Holani.

New Mexico scored on a 69-yard touchdown pass, but Boise State responded and made it 31-7 on a four-yard pass from Bachmeier to Caples on a short shovel pass.

It wasn’t the prettiest game the Broncos will play all season. But they won – and that’s good enough at this point.