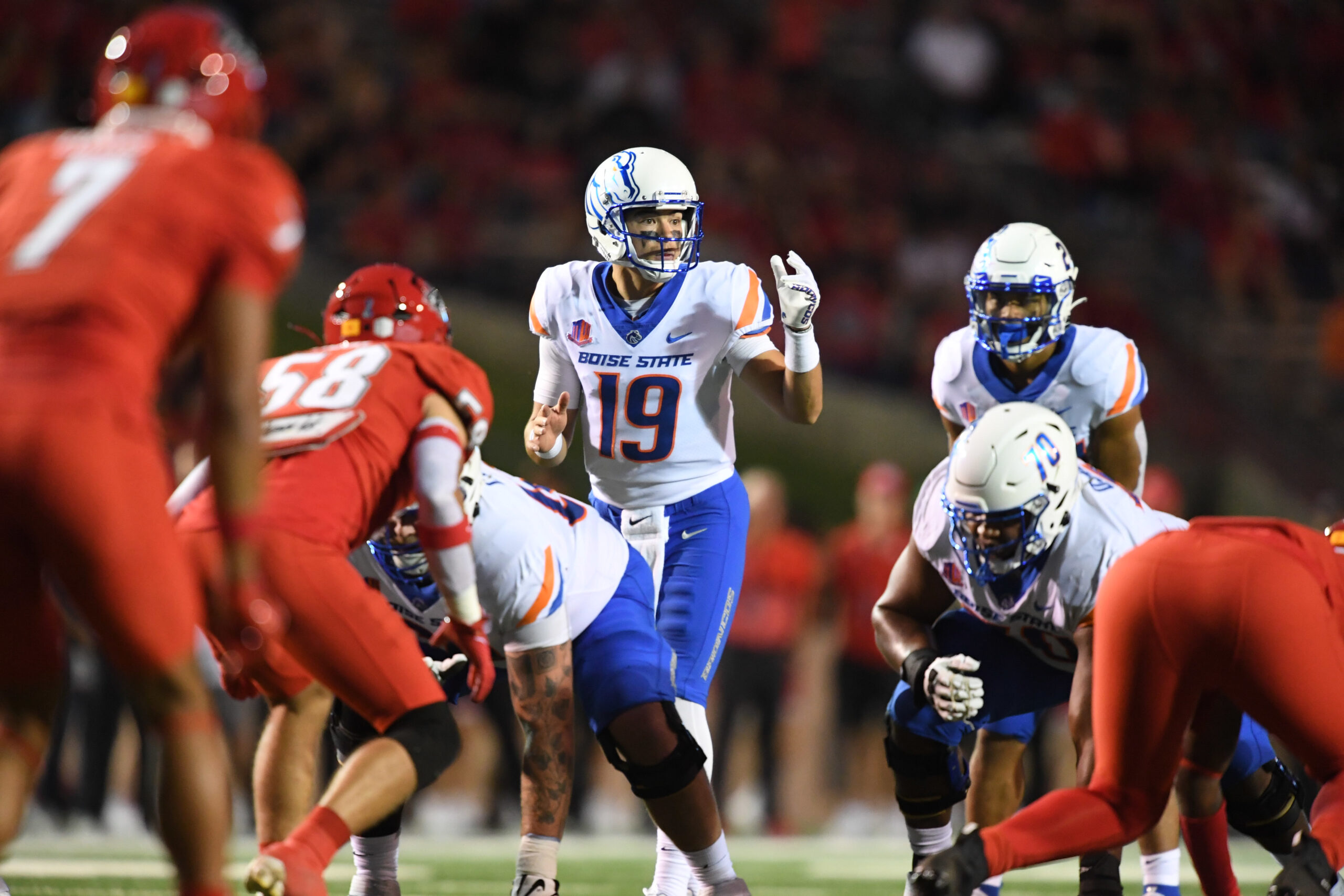 Boise State quarterback Hank Bachmeier motions to a wide receiver prior to a snap in the first half against New Mexico on Friday night. (Photo from Boise State Athletics)
By B.J. RainsSeptember 10, 2022

ALBUQUERQUE, N.M. – It wasn’t the best game of Hank Bachmeier’s career. Not even close.

But given the circumstances and what the four-year starter has endured the past week, it certainly seemed like a step in the right direction.

After being benched last week in a season-opening loss to Oregon State, Bachmeier responded by throwing three touchdown passes and leading Boise State to a 31-14 win at New Mexico on Friday night.

“Just really proud of him,” Boise State coach Andy Avalos said. “Him and Taylen (Green), how they worked together this week to help the team get better, and obviously to come out here and take care of the ball much better today and put some points on the board … Everyone is happy for him and happy for the team.”

The overall stats weren’t anything to go crazy about. He completed 16 of 27 passes for 170 yards and had an interception on a ball thrown into double coverage to go along with the three touchdowns.

But it was certainly better than what he did against Oregon State, when he had two bad interceptions and lost a fumble by the early part of the second quarter. His six drives were either turnovers or three-and-outs, leading Avalos and offensive coordinator Tim Plough to make the surprising decision to put him on the bench.

The talented redshirt freshman Green came in and did some nice things – he ran for a 74-yard touchdown – but the Broncos ultimately couldn’t overcome the rough start in a 34-17 loss.

As the debate in Boise raged on all week as to who should start, Avalos and Plough let the two decide for themselves in practice. The two competed for the spot all week, and ultimately it was Bachmeier that earned another chance from the coaches.

He made the most of it. After a slow start – the Broncos had two three-and-outs to start the game – he finally got the offense going. Bachmeier found Cole Wright for a 47-yard pass down the middle of the field, and finished an 8-play, 91-yard drive with an 18-yard touchdown pass to Latrell Caples.

“It shows how much of a fighter he is and how much we believe in him as a team,” Caples said. “For him to come out there and be able to stick it to them and keep playing even with all the noise, all the outside noise, he comes out and keeps playing and that’s what we love about him.”

Bachmeier connected with Billy Bowens later in the second quarter for a 41-yard completion to set up a 48-yard field goal from Dalmas and a 10-0 Boise State lead.

He led two more scoring drives in the second half, both of which ended with him throwing touchdown passes. First he found George Holani for a short 3-yard touchdown in the third quarter, and used a short shovel pass to Caples for a 4-yard touchdown.

It was only the fourth time in 27 career games in which Bachmeier passed for at least three touchdowns.

Not a bad response after being benched the previous week and having to work to keep his starting spot all week in practice.

“Hank is a great guy, a great teammate and we know Hank will get the work done,” linebacker Ezekiel Noa said. “We all make mistakes and Hank was the first one to really own up to his mistakes and it showed today in the game and in the preparation he had throughout the week.

“We’re all behind him and obviously he’s our teammate, he’s our brother…and he really responded well.”

Who knows how quick of a leash the coaching staff might have had on Bachmeier had he got off to a rough start. Luckily for him, we’ll never know. Green saw the field for just one play in the second quarter, and he handed it off to Ashton Jeanty for a 3-yard loss.

Bachmeier was’t made available to the media after the game, but it was clear his teammates were happy to see him respond.

Again, it wasn’t the worlds greatest performance. And the Broncos were playing New Mexico, one of the worst teams on their schedule. So do with it what you want.

But after imploding on national television and watching most of the game from the bench, it was definitely something for Bachmeier and the Broncos to build on.

Despite a week of heavy criticism on social media and fans falling for Green to take over as the starter, Bachmeier handled the pressure and played well enough to keep his spot moving forward. More importantly, he helped the Broncos to their first win in 2022.

“What you saw there was just an indication of what was happening at practice throughout the week,” Avalos said. “We just have to keep building on that and finding ways to keep getting better.”

Added Caples, “He showed that after all that happened in week one he can bounce back. He showed his poise and he showed he’s a fighter.”

Friday night in Albuquerque, that was good enough.

The Broncos will host UT Martin on Saturday, Sept. 17th, in the home opener at Albertsons Stadium. Kick off is slated for 2 p.m. and the game will be televised nationally on FOX Sports 1.

And there’s no debate this week. Bachmeier earned himself another start.

Broncos have plenty to fix heading into Friday’s game at New Mexico
September 8, 2022

Broncos giving Bachmeier a chance to respond – but will he start Friday at New Mexico?
September 6, 2022