After getting engaged a day earlier, Boise State’s Shakir has no nerves at Pro Day 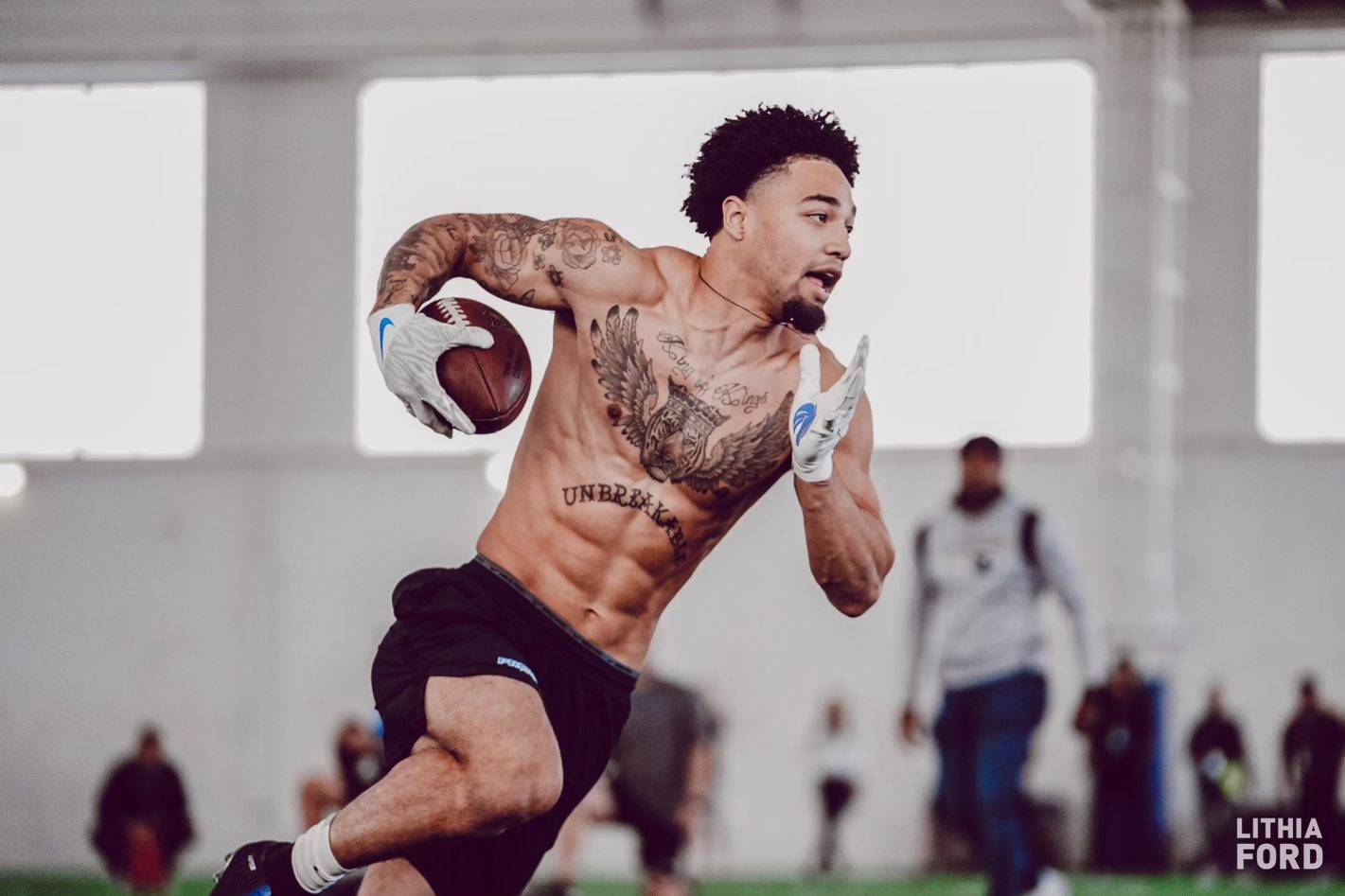 Khalil Shakir is as cool as they come on the football field and he’s rarely rattled or uncomfortable.

What he did Tuesday at Lucky Peak was a different story.

“I don’t really get nervous but there are certain moments and I got on my knee right behind her and I was shaking so much,” Shakir said. “She turned around and I honestly blacked out, I don’t know what I said but I know she said yes.”

Wednesday was a big day for Shakir on the football field as he worked out for NFL scouts at Boise State’s Pro Day. But he was much more nervous in the days leading up to this week for the proposal.

Shakir picked Tuesday because Sayler’s parents would be in town and his mom Mona would there as well. His agents Sam Mirza and Derek Hawkridge of Steinberg Sports were also there – and served as the photographer and videographer.

“I had been thinking about it for three to four months – I’m mid-combine thinking about it like ‘dang, I want to propose to my lady.’ I decided to do it yesterday and it was a good weight off my shoulders. I’m happy she said yes.”

As for his other big day on Wednesday, Shakir posted an impressive 38.5-inch vertical, a 10-4 broad jump and had no drops during a strong on-field workout.

“It went well,” Shakir said. “It was good to be back in Boise and back on my home turf.”

Shakir has seen his stock rise the past few months with his performances at the Senior Bowl and the NFL Scouting Combine (when he ran an eye-popping 4.35-second 40-yard dash). He carried that momentum into Wednesday’s showing in front of scouts for 21 NFL teams.

“I’m happy with what I’ve done to this point,” Shakir said. “It’s a blessing to be here and I’m happy with how today went and how the whole process is going. I’ve got another month and then God willing I’ll land somewhere where I’m supposed to be at.”

Shakir had 2,708 receiving yards the past three seasons, the fifth-most of any player in the country. He had 77 catches for 1,117 receiving yards and seven touchdowns as a senior last fall.

The 6-foot Shakir finished his career fourth all-time in Boise State history with 2,878 receiving yards and fifth with 208 catches. He was tied for sixth with 10 career 100-yard games.

Shakir said his versatility is what he hopes NFL scouts will like about him. He took snaps at running back, quarterback (Wildcat) and multiple wide receiver spots during his time in Boise.

“When I’m on the field you can put me anywhere and I’m going to perform at an elite level,” Shakir said. “No matter where you put me I’m comfortable. The versatility is there. Use me how you want to. I’m just trying to get that point across (to NFL teams). At the end of the day I’m a playmaker wherever I’m at.”

After finishing the interview Shakir said it was time to celebrate – both Pro Day being over and his engagement. One meant more to him.

“Her support means everything to me,” Shakir said of his now fiancé Sayler. “Having a partner like her is a blessing and I’m happy I get to spend the rest of my life with her.”

Shakir is less than a month from living out his dream and hearing his name called in the NFL Draft. And now that he’s got the important question already out of the way, he’s got no more reason to be nervous.