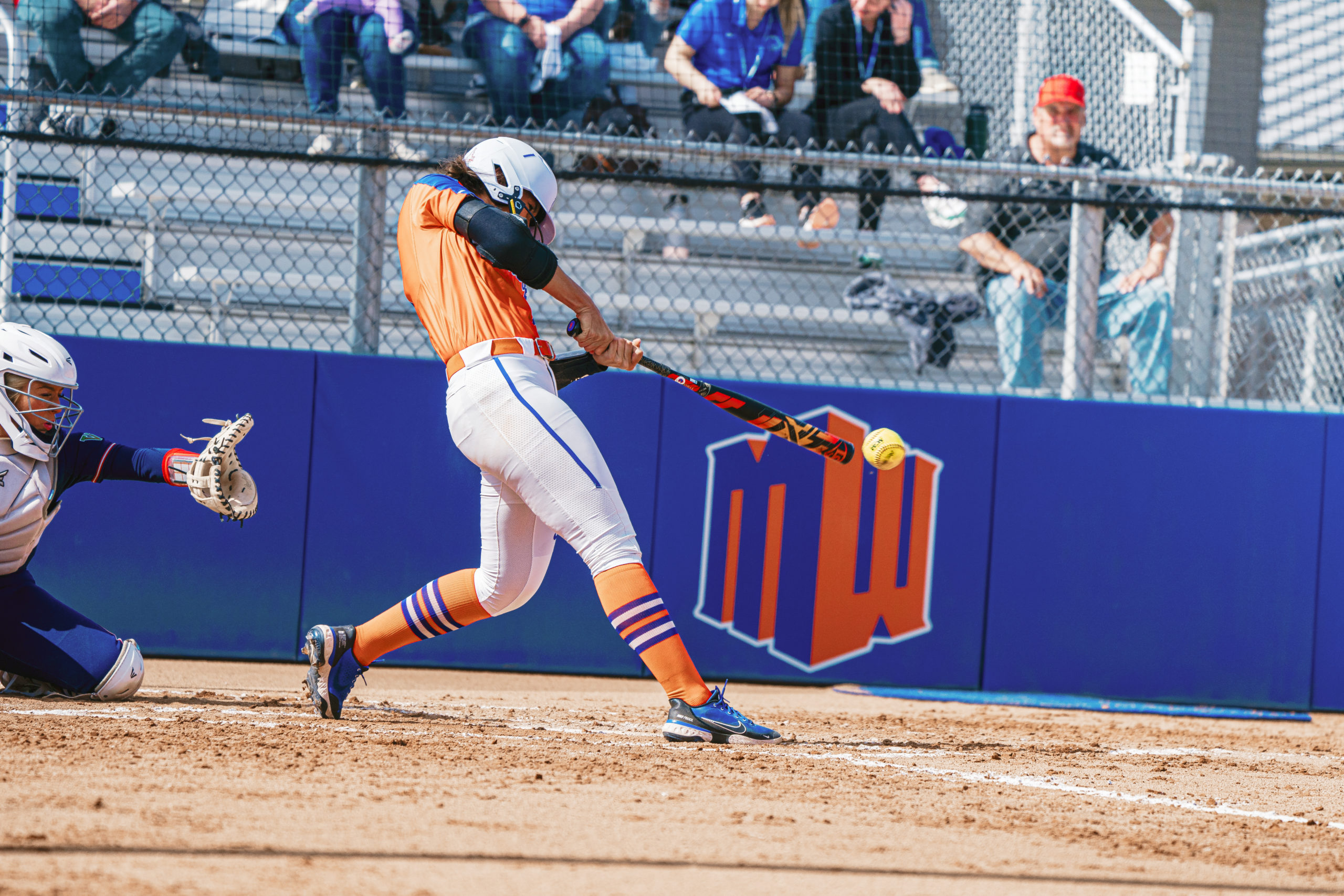 Alison Seng connects at the plate during home opener against Fresno State. (Photo by Tyler McFarland/BSU Athletics)
By Collin MitchellMarch 30, 2022

Alison Seng made a decision in 2016 to attend Boise State with two main goals in mind.

Get an education and leave the Bronco softball program better than how she found it.

A two-time All-Mountain West First Team selection at first base and four-time Mountain West Scholar-Athlete, Seng did just that – and a whole lot more.

“I’m so glad that I committed here as a fifteen-year-old,” Seng told Bronco Nation News. “It’s crazy to think I’m 23 now and still haven’t fallen out of love with the city and the entire school.”

As a fifth-year senior, Seng has been in the Treasure Valley for the highest of the highs and lowest of the lows: three head coaches, two NCAA tournament appearances, a losing season and a pandemic.

Seng has developed greatly in her four and a half years on campus, but the most shocking surprise has come this season with the lefty emerging at the plate with a power surge.

She had zero home runs in 2021 but is tied for the team lead with eight long balls in 32 games this season. She is also hitting .311 at the plate.

Alison Seng with her 2nd homerun of the game, 8th of the season.#WhatsNext | #BleedBlue pic.twitter.com/YsLOTiFqFz

“It’s crazy because we’ve always joked that I had no home runs last year and how I wanted to make this year a comeback year,” Seng chuckled. “I think surrounding myself with coach Shults’ coaching style and learning from my teammates has helped me.”

Boise State as a whole has increased its power numbers since Justin Shults took as head coach, leading the Mountain West Conference in both runs scored (231) and home runs (47).

“We knew she had power in the tank. Her having teammates around her that are constantly displaying power in practice I think challenges her to get a little bit more out,” Shults said. “She’s really found good pitches to swing at and that’s correlated to the power surge seen this year.”

Though the stars have successfully aligned this season, there have been several peaks and valleys in her collegiate career.

“Something that really goes under the radar that people really don’t talk about a lot is that I struggled with my mental health a lot during the pandemic year,” Seng said. “It was really hard, but I found great people to surround myself with and a lot of amazing resources at Boise State that have really helped me to get better throughout the years.”

Seng is the longest tenured player on the Bronco roster and has been around numerous different teammates throughout the years that have helped her. Going from two straight NCAA tournament appearances (2018-19) to having a season cut short in 2020 and a losing season in 2021 is a huge drop-off.

That doesn’t even include the second coaching switch since she arrived in Boise. Some athletes when put in positions of adversity over a duration of time might have chosen to hang up their cleats. Seng decided to finish the job.

“It’s been hard with three coaches but it’s nothing that I couldn’t adjust to … I definitely can’t do it by myself and there is a great leadership team,” Seng said. “As a fifth year I know that girls look up to me … I really think it’s about being on an individual level and making connections with your teammates and learning even the little things about them that will help on and off the field.”

This strength, drive and tenacity to do well both in the classroom and on the field no matter the circumstances stems directly back to her family roots.

“Academics is something I’m very passionate about,” Seng said. “My parents are first generation Americans and they never got to go to school or get a higher education so it was really important for me and my family values to stay in school and not only pass my classes, but also succeed in them and take what I can into the real world.”

In terms of what has come out of Seng’s fifth year so far with the team, the Broncos are off to their best start in school history at 27-5 and are ranked nationally for just the second time since the program’s inception. Boise State is currently on a 10-game winning streak.

“It’s humbling because it’s only the second time it has happened in school history,” Shults said. “It’s all credited to how hard our girls have worked in the fall and January and then being able to display all that hard work early in the season.”

Seng has high hopes for the Broncos to make some noise in the back end of the season and into the postseason. After five years, she’s hoping to go out in style.

“I came here when the program went to its first regional and then we made it to our second with an at-large bid which is something we’ve never done before,” Seng said. “Third time is the charm hopefully … We’re a really good team that steps up under the big lights and I’m really excited to see where that goes.”

Boise State hosts UNLV (24-6) in a three-game series that could be pivotal for the Mountain West standings starting on Friday at Dona Larsen Park. All three games will be streamed on the Mountain West Network.

Alison Seng goes deep with a runner on for her team-leading seventh home run of the season and the Broncos take the lead.#WhatsNext #BleedBlue pic.twitter.com/A7NUlmxmXj