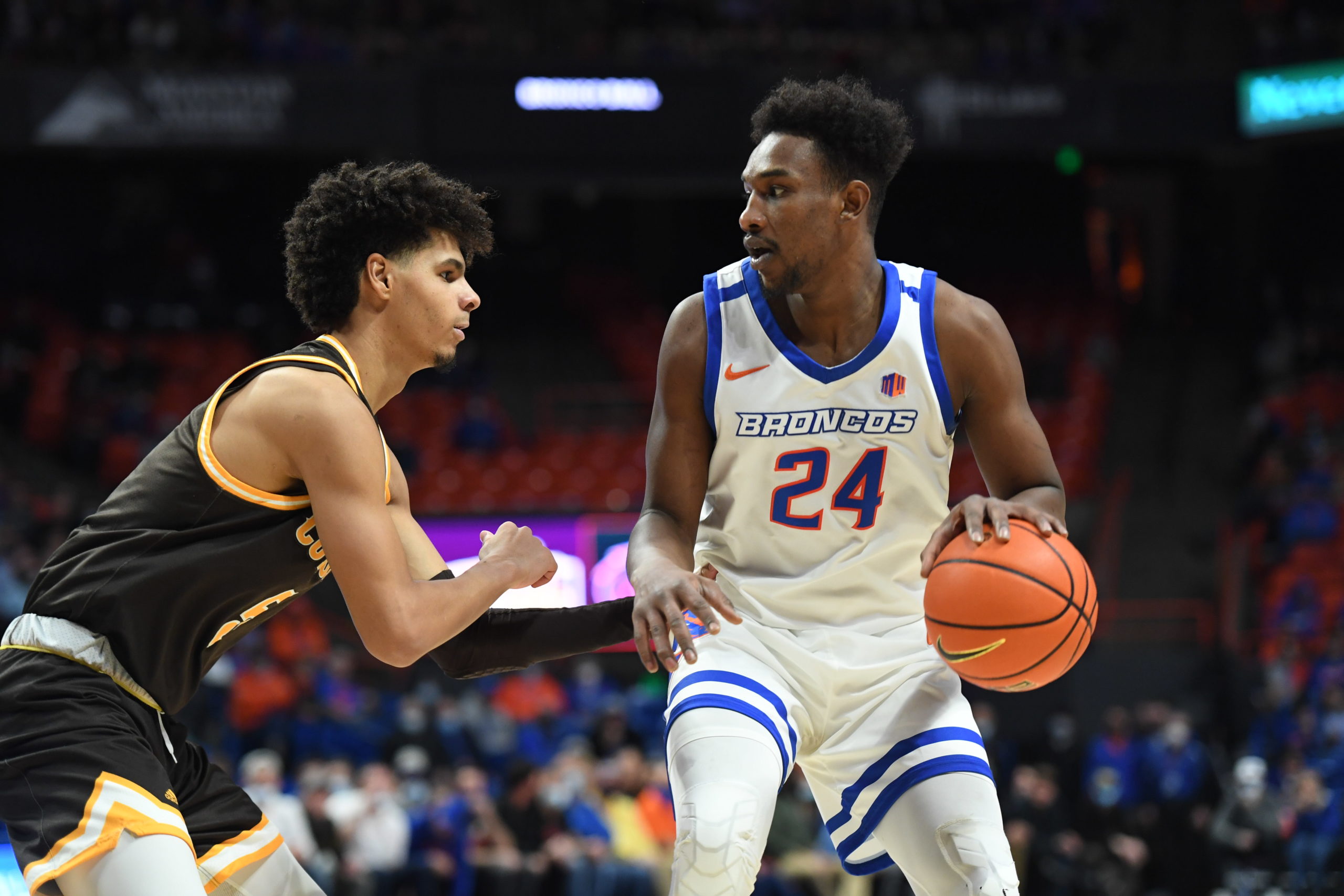 Boise State's Abu Kigab dribbles the ball against Wyoming on Tuesday night at ExtraMile Arena in Boise. The Broncos came back to beat the Cowboys, 65-62. (Photo courtesy of John Kelly/Boise State Athletics)
By B.J. RainsJanuary 26, 2022

BOISE – With a 12-game winning streak on the line, Boise State turned to its veteran leader and most experienced player in crunch time.

The fifth-year senior and former Oregon transfer tied the game on a basket with 1:34 to play and put the Broncos up for good with a pair of free throws a short time later to help the Boise State sneak past Wyoming 65-62 to equal the program record with a 13th consecutive win.

In the final three minutes Kigab also took a charge, had two huge defensive rebounds and made 5 of 6 free throws during a personal 7-0 run to help Boise State overcome a 2-point deficit to improve to 16-4 overall and 7-0 in Mountain West play.

“He made big play after big play down the stretch,” Boise State coach Leon Rice said. “He’s a great second-half player. The more tired everybody else gets the better Abu gets I think.”

With a season-high crowd of 8,292 suddenly quiet and nervous, Kigab calmly backed down his defender and scored on a short one-handed shot in the paint to even the score at 60.

“I knew I was going to score on him,” Kigab said. “We work on that every single day and I knew if I took my time I’d get a good shot and that’s what I did.”

Kigab then took a charge on the defensive end and hit two free throws with 1:08 to give the Broncos the lead. Twice in the final minute he then grabbed defensive rebounds and got fouled and made three of four free throws to extend Boise State’s lead.

“Big finish,” Kigab said. “We knew it would come down to our defensive rebounding and hitting those free throws at the end and we did a good job of that.

“We’ve been in so many close games this year and we have such a tight roster and the guys, all of them make winning plays. They will do whatever it takes at the end of the game.”

Freshman Tyson Degenhart had 14 points and Naje Smith and Mladen Armus each added eight for the Broncos, who won despite getting out-shot and out-rebounded by Wyoming.

The game featured 13 lead changes and four ties – and even the ejection of former Boise State player Matt Bauscher by lead official Verne Harris while sitting in the front row with 2:46 left.

Bauscher, who will join Bronco Nation News for his weekly interview at 12:45 p.m. on Wednesday, clapped his hands and waved his arms to pump up the crowd as he was escorted out of the arena.

The Broncos promptly went on a 7-1 with Kigab’s seven points to take the lead for good.

Marcus Shaver Jr. rolled his ankle late in the first half but returned and played all 20 minutes in the second half. Shaver Jr. and Emmanuel Akot combined to score just 10 points and Armus was in foul trouble for a good portion of the game – and the Broncos still found a way to win.

“These guys are amazing,” Rice said. “I’m so proud of the guys and the way we just keep battling and battling and somehow find ways (to keep winning).”

Wyoming (15-3, 4-1 MW), which entered as the only other unbeaten team in the Mountain West, got 19 points and nine rebounds from Graham Ike and 17 points from Hunter Maldonado.

Boise State hasn’t lost in nearly two months – Nov. 30 against Saint Louis – and sits alone atop the league standings. The 13 wins equals the school record set last year, but that came with no fans in the stands and against some of the worst teams in the Mountain West.

This year’s streak is much more impressive. The Broncos have beaten six teams ranked in the top 100 at KenPom and won five road games during the 13-game run.

“We’re super confident when it comes down to the wire,” Degenhart said. “On this win streak we’ve been in a lot of close games and we’ve found ways to win and we continue to do that each and every night.”

Boise State will look to establish a new school record of 14 wins in a row on Friday night at Fresno State, which ranks No. 57 at KenPom and nearly beat the Broncos in a close game in Boise back on Dec. 28.

The Broncos, riding high and on a roll, are confident they can continue the streak and enter their names into the record books.

Tip off is set for 9 p.m. MT and the game will air nationally on FOX Sports 1.

Harsin probably to be fired.by Bronco74544 days ago

2023 Rosterby Perry Sorenson7 days ago
Fan Poll
What bowl game would be best for the Broncos?

Boise State kicker Jonah Dalmas made 26 field goals last season - more than any kicker in the country.He figures to be an important player for the Broncos again in 2022: ... See MoreSee Less

No. 12 on the BNN most important players list for Boise State football in 2022: kicker Jonah Dalmas - Bronco Nation News

Bronco Nation News is counting down the 25 most important players to the Boise State football team in 2022. Next up in our series is No. 12, kicker Jonah Dalmas: We’re LIVE on a Thursday edition of ...
View on Facebook
· Share

B.J. Rains of Bronco Nation News and Mike Prater of KTIK 95.3 FM The Ticket discuss kicker Jonah Dalmas, the No. 12 player on our list of the 25 most important players to the Broncos in 2022. Dalmas joins the show live to recap his historic 2021 season and look ahead to this fall. ... See MoreSee Less

No. 13 on the BNN most important players list for Boise State football in 2022: Cornerback Caleb Biggers - Bronco Nation News

Bronco Nation News is counting down the 25 most important players to the Boise State football team in 2022. Next up in our series is No. 13, cornerback Caleb Biggers: Caleb Biggers got his first chanc...
View on Facebook
· Share

B.J. Rains of Bronco Nation News unveils and discusses No. 13 on our list of the 25 most important players to the Boise State football team in 2022, corner Caleb Biggers. ... See MoreSee Less

B.J. Rains of Bronco Nation News and Jay Tust of KTVB unveil and discuss No. 14 in the BNN countdown of the 25 most important players to the Boise State football team in 2022. Also, Boise State softball coach Justin Shults joins the show to recap a historic season. ... See MoreSee Less