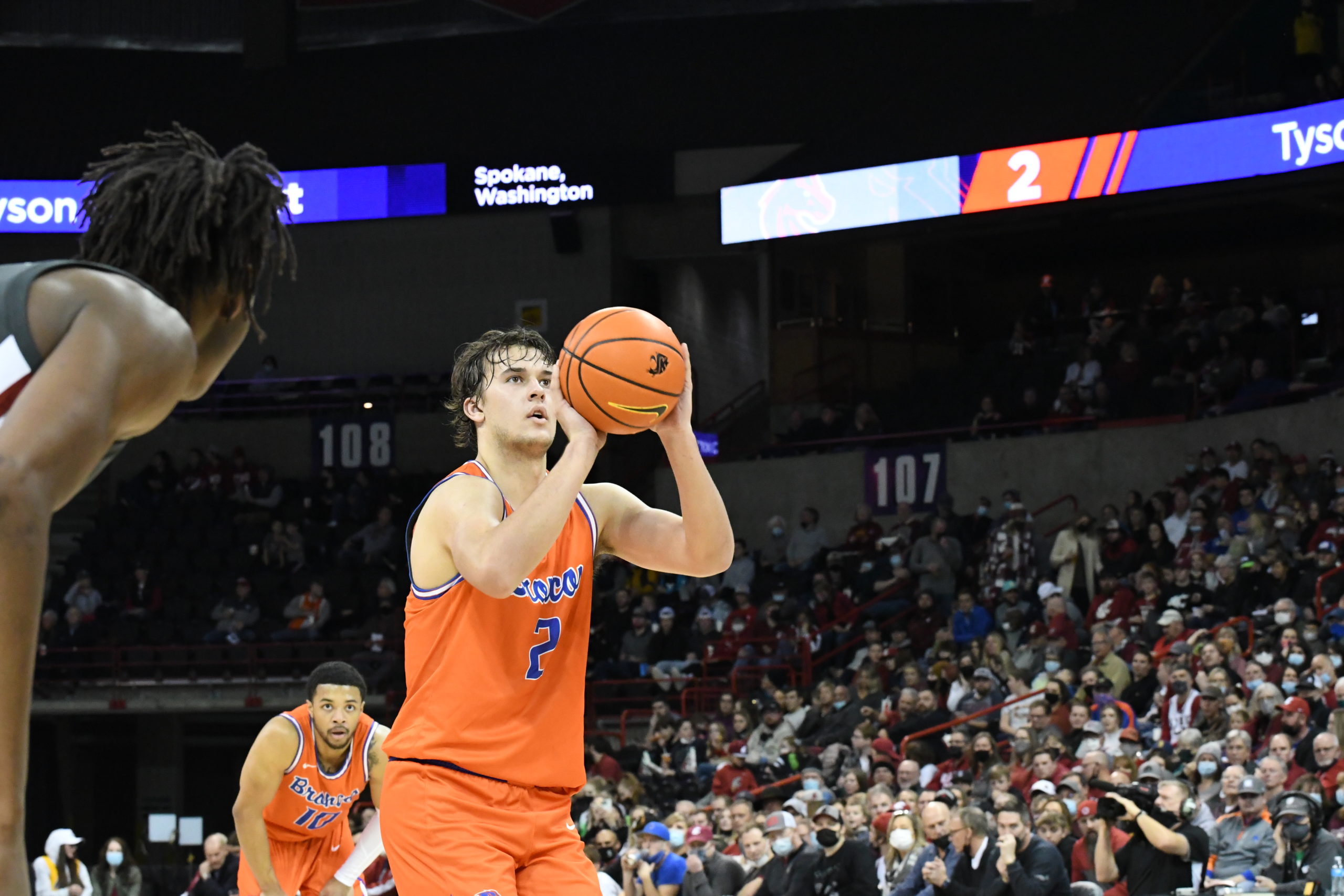 SPOKANE, Wash. – Tyson Degenhart looked nervous and out of sync for much of the night while playing in front of hundreds of family and friends back in his home town.

But the freshman made up for a frustrating first 35 minutes with maybe his biggest shot in a Boise State uniform.

Degenhart drilled a key 3-pointer with 2:03 left and Boise State sealed the game at the free throw line to pull out a thrilling 58-52 win over Washington State at Spokane Arena Wednesday night.

“That was a super special moment – something I’m never going to forget for the rest of my life,” Degenhart said.

Abu Kigab had 19 points, Marcus Shaver Jr. had 15 and Degenhart had 11 for the Broncos (9-4), who have won six games in a row heading into their Mountain West opener against Fresno State on Tuesday in Boise.

The win is a much-needed Quad 1 win for the Broncos, who topped No. 47 Washington State (8-5) at KenPom.com to rise to no. 57 themselves.

Boise State struggled to score for much of the night but leaned on its defense, holding Washington State to 30.5 percent from the field and just 29.2 percent from 3-point range.

The Broncos also had a rare strong night at the free throw line, making 18 of 21 foul shots for the game – including 9 of 10 in the final 1:10 to seal the game.

After a 3-4 start with an ugly loss to CSU-Bakersfield, the Broncos have won six games in a row and hit a short holiday break with a big wave of momentum.

“It was a great win,” Boise State coach Leon Rice told Bronco Nation News. “I knew it was going to be a defensive struggle. Going into this game my biggest concern was scoring. I knew scoring would be tough for us and I was hoping it would be tough for them too. Certainly it was tough for us in the first half.” 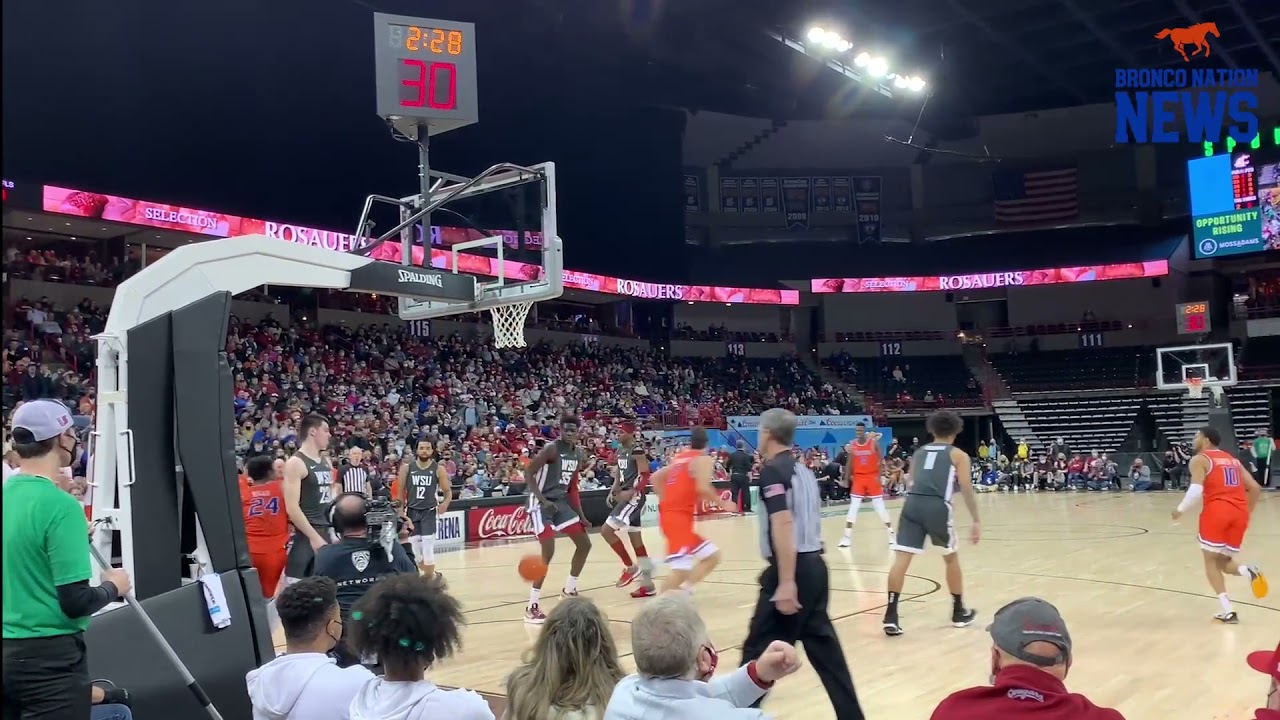 Boise State scored just 19 points in the first half but got things going in the second half. Degenhart, a graduate of Mount Spokane High School, started just 1 for 8 from the field with roughly 350 family members and friends in the stands. But he made his final two shots down the stretch – and both were big.

“You can’t script a homecoming better than that,” Rice said. “They had just hit a big 3 and he answered it. That was big. This team and this coaching staff, we have a lot of confidence in Tyson. He’s a winner and he’s a gamer. We wanted to give him that opportunity to hit that shot.”

Degenhart threw his hands in the air to pump up the crowd, many of which were wearing blue and orange and cheering for the Broncos.

Boise State found itself extremely fortunate to only be down 24-19 at the half. The Broncos scored just nine points in the first 15 minutes and at one point went 6:11 without a point. Included were several misses on point-blank shots close to the rim.

The Broncos went just 6 of 24 from the field in the opening 20 minutes and 2 of 11 from 3-point range. They also had nine turnovers, many of which were unforced on bad passes.

It likely would have been a lot worse had the Broncos not been saved by their defense. Boise State, which entered the game ranked No. 30 in the country in adjusted defensive efficiency at KenPom.com, held Washington State to 37.5 percent shooting and 3 of 10 from the 3-point arc. The Broncos also forced Wazzu into eight first-half turnovers to keep the deficit at 5.

“Credit their defense,” Rice said. “They are a good defensive team.” 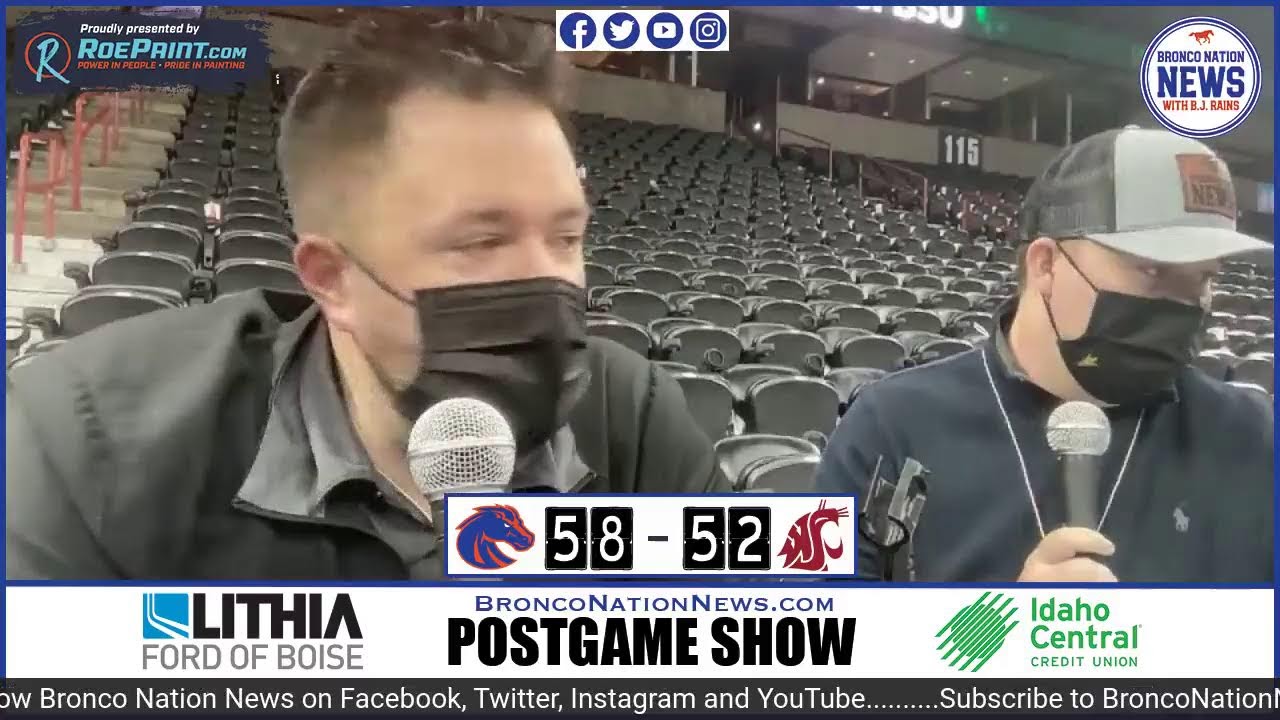 Boise State trailed 32-30 midway through the second half when a pair of Degenhart free throws tied the game at 32. Kigab added a runner to give the Broncos the lead and Spokane native Naje Smith followed with a putback to make it 36-32.

After a free throw from Washington State’s Tyrell Roberts, Akot followed his own miss with a putback of his own to extend Boise State’s lead to 38-33 with 7:47 to go.

But the Cougars refused to go down quietly, and Flowers answered with another 3-pointer to cut Boise State’s lead to 46-45 with 2:14 to go.

That’s when Degenhart finally had his moment. The Spokane native’s 3-pointer from the wing gave the Broncos a 49-45 lead, and Kigab did the rest at the foul line.

A tip-in by Andrej Jakimovski with 1:33 to go made it 49-45, but Kigab followed with two huge free throws after the Cougars were called for an intentional foul to extend the Boise State lead to 51-47 with 1:11 to go.

For the game Kigab went 9 of 11 from the foul line and the Broncos – who entered as one of the worst free-throw shooting teams in the country – had their best night of the season from the charity stripe at 18 for 21.

It was a homecoming for Rice, who spent 11 years as an assistant at Gonzaga, and several others associated with the program. It was a trip and night they won’t soon forget – and it’s a win the Broncos hopefully will remember come March.

“It was special,” Rice said. “It’s about these guys and to give Naje and Tyson that in front of this crowd – this was a good college atmosphere, one of the better crowds we’ve played in front of, and to come out of here with a victory against that team is big.”