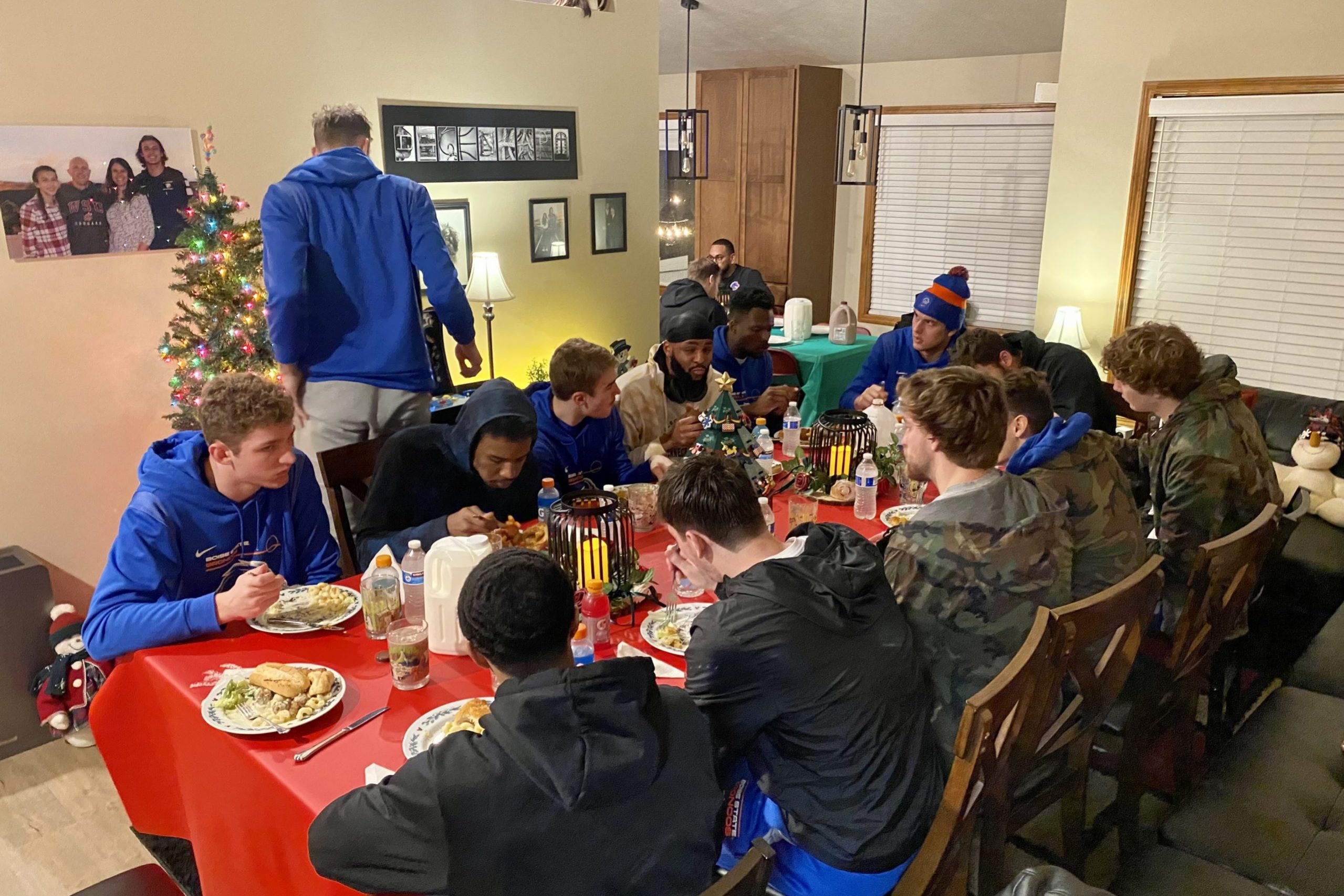 When Tyson Degenhart committed to Boise State two years ago, he never would have imagined the team bus rolling down the street of his childhood home and his teammates and coaches coming over for dinner.

But that’s what happened Tuesday night in Spokane as the entire traveling party – players, coaches and support staff – came over to eat and hang out with his family ahead of Wednesday’s game at Spokane Arena against Washington State.

The freshman is one of three Boise State players who grew up in Spokane. Degenhart went to Mt. Spokane High School while Naje Smith went to Lewis and Clark High School. Max Rice lived in Spokane for the first 11 years of his life while his dad Leon, Boise State’s head coach, was an assistant at Gonzaga.

Assistant coach Mike Burns also coached at Spokane Community College for a year and also spent four years as the head coach at nearby Eastern Washington in Cheney, Wash., a 20-minute drive to Spokane.

Freshman Kobe Young, who is redshirting this year but on the trip, is from two hours away in Pasco, Washington. Even assistant RJay Barsh has ties to Washington, playing and coaching in Tacoma.

It’s a rare trip down memory lane for a good chunk of the Broncos, who expect to have several hundred fans in attendance rooting for those with local ties.

“It’s a neat deal,” coach Leon Rice said. “I think we’re going to get 509 (area code) neck tattoos. We got Tyson and Naje from Spokane and Max spent his first 11 years there. I spent 11 years there, Kobe is from right down the road.

“It’s a bit of a homecoming for a lot of us. Plus it’s a good team we play against and it’s on a neutral court so to speak. I’m sure all of Mount Spokane will be there and hopefully all of Lewis and Clark and a lot of those Gonzaga folks will come support the Broncos.”

The local connections are an extra angle to what’s a huge game for the surging Broncos, who have won five games in a row and have looked like a completely different team the past three weeks.

Boise State (8-4) is looking to earn a ‘Quad 1’ win for its NCAA Tournament resume. Washington State (8-4) ranks in the top 50 in both the NET and KenPom rankings, making it one of the biggest games of the entire season for the Broncos.

A win would extend the winning streak to six, give the Broncos some momentum heading into a short Christmas break and have them inching closer to getting back onto the NCAA Tournament bubble.

“We’re all excited to play,” Smith said. “The guys are fired up and really excited for this chance to show what we can do. It’s a big opportunity and we’re hoping to make the most of it.”

Degenhart has emerged as a star for the Broncos and is averaging 15.3 points in six games since moving into the starting lineup. The freshman has made 12 of 21 shots from 3-point range during that span and has become one of Boise State’s top scoring threats despite being a freshman.

Smith is one of Boise State’s first options off the bench and is averaging 5.1 points and 3.2 rebounds in 17.1 minutes per game. He’s much improved from last season, when he played sparingly for the Broncos after transferring from Cochise College – where he was a first-team JUCO All-American.

Both Degenhart and Smith played multiple games in Spokane Arenas during their high school careers, making their return home even cooler.

“It’s going to be a surreal experience,” Smith said. “None of them were able to watch me last year due to COVID and stuff so it’s really exciting to finally have my family and friends be able to see me and to see how much I’ve grown and how much I’ve matured.

“I’m excited. I feel like I’ve had a long journey and I’m excited to be back and show what I can do and how much I’ve changed.”

Boise State traveled to Spokane on Monday, a day earlier than normal for a road game. That allowed Smith to go out to dinner with his family on Monday, and for Degenhart, Rice and a few others to attend Gonzaga’s home game against Northern Arizona on Monday night.

The Broncos practiced at Gonzaga’s practice gym on Monday and inside Spokane Arena on Tuesday.

Gonzaga coach Mark Few and his family remains very close with the Rice family. Some members of the Few family will be in attendance Wednesday night to support the Broncos.

Leon Rice was an assistant at Gonzaga under Few from 1999-2010, moving to Spokane shortly after Max was born. The family lived in Spokane for 11 years until moving to Boise when Rice was hired as head coach in 2010.

“This trip means everything,” Max Rice said. “Being back here you still feel part of the town and family and it brings back a lot of memories of where it all began and how it all started. Spokane is a great city and we love it here.

“I’m super happy I get to do this before my career is over. It’s really cool to be back here and get to play here. Hopefully we can get the win.”

Leon Rice told a story of a game in 2000 when he was coaching at Gonzaga and they came to play in the Treasure Valley so Boise native Cory Violette could get a game in front of his family and friends. Violette had just six points and Gonzaga suffered a 94-69 loss to Boise State.

He noted that homecomings can sometimes be tough for players due to the extra pressure of playing with so many family and friends in the stands, but he’s confident that won’t be the case on Wednesday night.

“I’ve seen it more often than not go awful,” Rice said. “ Going back to my days bringing Cory Violette here, coach Few and I almost didn’t come out after halftime because Abe Jackson was just pasting us with 3s. I think he had 36 points (actually had 29 on 9 of 14 shooting from 3-point range). I remember we were still in the locker room when the horn went off to start the second half and we looked at each there like, ‘do we have to come out?’

“I just remember thinking I’ll never do that. I’ll never take a kid home just to take a kid home. And that’s not why we did it. We did it because it’s a great opportunity. It’s a 40-minute flight, it’s two teams fighting for the postseason and I think it’s a really meaningful game for both teams. The other stuff is just a benefit of it. I think our kids are mature and it won’t be over the top for them. They won’t play outside of themselves. They’ll be who they are – which is pretty darn good basketball players.”

It’s a trip and a game many of the Broncos won’t forget. A win would make it that much more special.

“It’s definitely harder to treat it like a normal game just knowing where I’m at and knowing the people that will be there,” Degenhart admitted. “Former teachers, classmates, there’s going to be a lot of people there. And seeing people that supported me through high school and now college, it’s just really going to be special.

“In the end though it’s just another game to try and get a win.”

Tip off is set for 6 p.m. MST and the game will air nationally on the Pac-12 Network.

Answer to the question most Bronc …by king seo5 hours ago