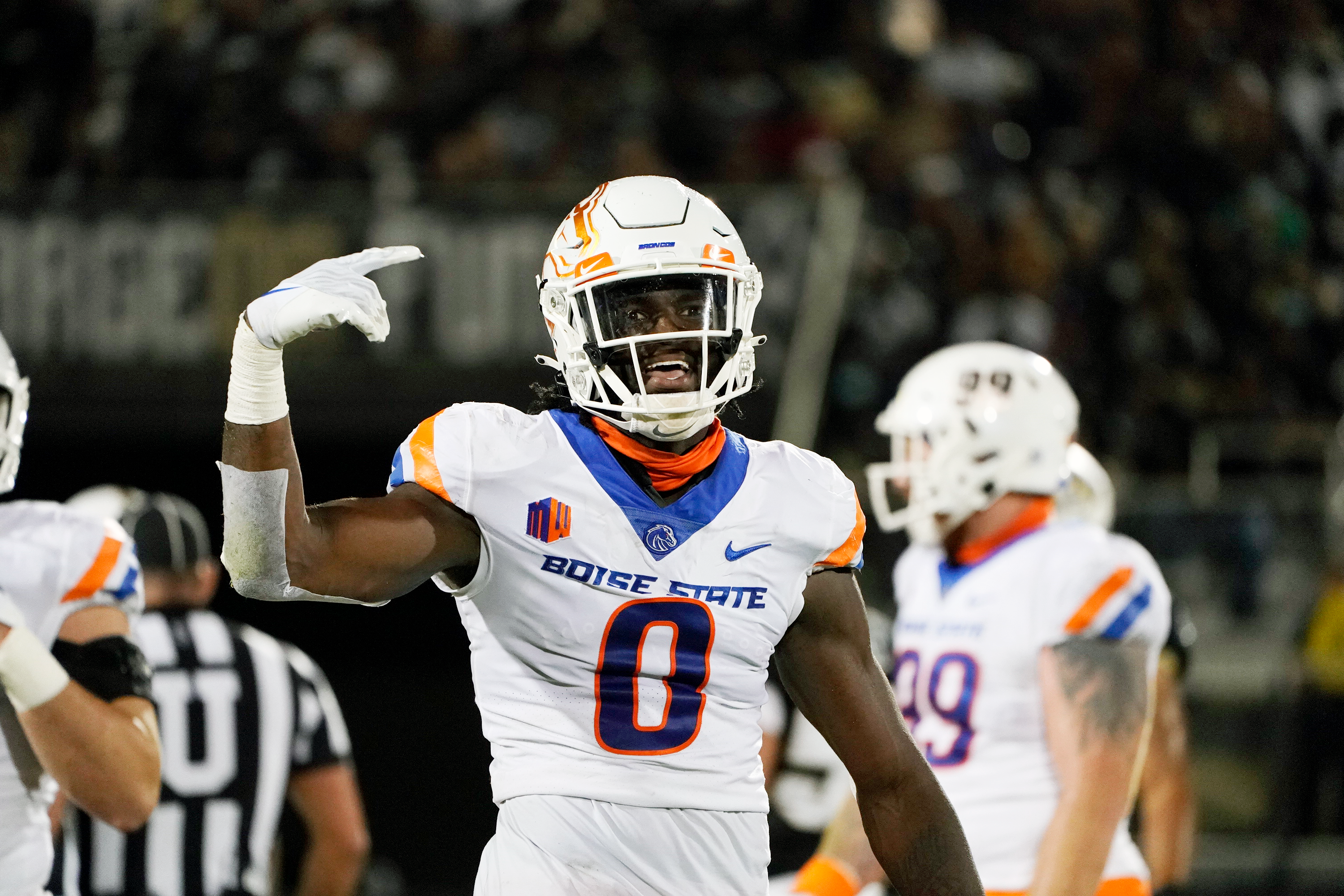 Boise State safety JL Skinner celebrates after making a play against UCF in the season opener on Sept. 2. Skinner announced Sunday he will be returning for his senior season with the Broncos in 2022. (Photo courtesy of Boise State Athletics)
By B.J. RainsDecember 19, 2021

Boise State safety JL Skinner announced on social media Sunday that he will return for his senior season with the Broncos in 2022.

The junior, who leads Boise State with 92 tackles, likely would have been picked in the upcoming NFL Draft but instead will try to improve his stock and be a higher pick in 2023.

“I think for JL it was an easy decision because he wants to improve himself,” Skinner’s mother Thomasina Alexander told Bronco Nation News. “He got to work with the different coaches this season and I feel like he can improve from where he was this year and that’s his goal, to improve so when he goes to the NFL he feels completely ready.

“The way we looked at it was he can only go higher than he is now. He can feel better about his ability if he stays another year and he’s with all of his friends that he came in with. He’s going to do whatever he needs to do to be even greater than he is now.”

Skinner had been leaning in this direction for several weeks but called his mom Sunday to deliver the final news.

Alexander said she fully supported the decision and was happy he’ll be coming back to Boise State for another year.

“He made the decision that’s best for him in the long run,” Alexander said. “It’s important to him to get his degree. He could have always come back and got that but it was one of his personal goals when he committed. On my side of the family only three people have degrees and that’s one of his goals. He can do it by the time next spring comes.”

Skinner said recently that getting his degree and having his mom see him walk across the stage at graduation was a big goal of his. That apparently played a much bigger part in the decision than some might have figured it would.

“To be honest with you even if they told him he’d go in the first round I don’t think he would have gone because he wants to get a degree and be the best he can be,” Alexander said.

Skinner, who wants to go into the medical field when his football career is done, posted a video to social media with some highlights from the season and a short message that said, “See y’all in 2022. Zeros back.” Skinner wears jersey No. 0.

Many expected the 6-foot-4, 218-pound Skinner to make the jump to the NFL because of his unique combination of size and athleticism. Former safeties coach Gabe Franklin once referred to him as “a freak of nature” because of how well he moves and plays at his size.

Skinner has two interceptions this season to go along with his team-high 92 tackles and seven tackles-for-loss. He has at least nine tackles in seven of 12 games this season. He was named to the All-Mountain West Second Team at the end of the regular season.

The hard-hitting safety was ejected from two games this season due to targeting calls but made several memorable hits including one against Oklahoma State when he picked up the ball carrier and slammed him to the ground.

Alexander said she was most proud of her son because of the big-picture approach he took. Skinner could have declared for the draft and gone for the money – like many in position would have done – but instead will have a chance to improve his draft stock and earnings potential and be in a better position a year from now.

“It shows the maturity and that he’s grown up since he’s been at Boise State,” Alexander said. “Most would have gone for the money for him he wants to be great for the long term. He definitely feels he can develop more and he wants to get that degree and go into the medical field.

“He really likes (the new coaching staff). They’ve taught him a lot of things he didn’t know before and it’s good to have different people coach you. To me his game elevated big time this year from last year.”

And now he’ll be back to try and elevate it even more next year. If he does, both Skinner and the Broncos figure to benefit.