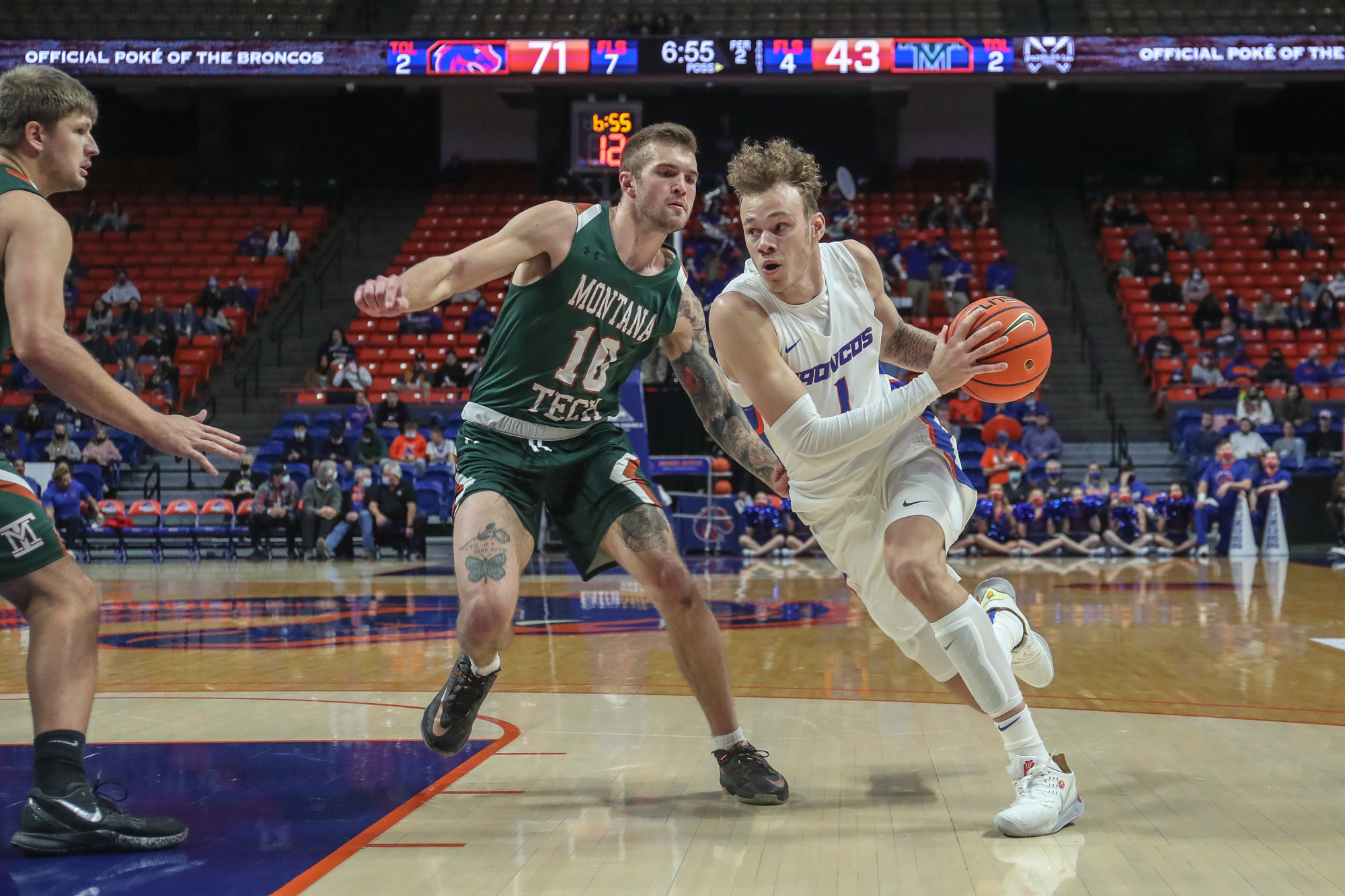 Boise State's Kasean Pryor drives towards the basket on Sunday against Montana Tech. The Broncos won the game, 88-57. (Photo by Loren Orr/LorenOrr.com)
By B.J. RainsDecember 19, 2021

The Boise State men’s basketball team did what it needed to Sunday afternoon against the NAIA-level Montana Tech Orediggers, rolling to a 88-57 win at ExtraMile Arena.

The win was the fifth in a row for the Broncos (8-4), who now get set for a huge matchup in Spokane against Washington State on Wednesday evening to wrap up nonconference play.

Emmanuel Akot had 16 points, Tyson Degenhart had 15 and Marcus Shaver Jr. had 13 for the Broncos, who shot 53.3 percent from the field and made 14 of 27 shots from 3-point range.

“You can’t script these things, it’s athletics, but that went as close to scripted as you can,” Boise State coach Leon Rice said. “That team we played was 11-4 and a good team, well coached, had some good athletes – they are real good non Division I. You couldn’t just go bully them, you had to move the ball and make shots and defend.

“It was perfect because we have a lot of guys on this team that come to practice every day and work hard and don’t get the opportunity (to play). … You need opportunities like this.”

Abu Kigab had 11 points while playing in front his dad for the first time during his college career. Rice said Kigab’s dad traveled all the way from Sudan to watch him graduate on Saturday and play on Sunday.

Boise State led 41-23 at the break and poured it on in the second half, leading from start to finish to continue a recent two-week stretch of impressive play.

Player of the game: Emmanuel Akot

Akot had a team-high 16 points on 6 of 11 shooting from the field, including 3 of 5 from 3-point range. He also had a team seven assists and added five rebounds.

“I thought we played really good team basketball,” Akot said. “Our togetherness is really showing and our ability to bring each other up. Our friendships have us really connecting out there on the court right now. We’re really gelling right now and hoping to keep it going.

11- Boise State played 11 different players in the game, and eight of them scored. The Broncos played every available player on their roster with three others redshirting.

14- Kasean Pryor came off the bench in the second half and had a career-high 14 points. He went 5 for 6 from the field and made all three of his 3-point attempts in just under 11 minutes of action.

Boise State (8-4) heads to Spokane, WA, to face the Washington State Cougars (8-4) in a Wednesday night showdown at 6 p.m. Mountain time at Spokane Arena. The game will be televised nationally on the Pac 12 Network.

Bronco Nation News will have two reporters on site to bring you complete coverage, including live pregame and postgame shows from courtside.

Boise State QB's number 15 and 16 …by Joseph Whitaker1 day ago
Fan Poll
What bowl game would be best for the Broncos?