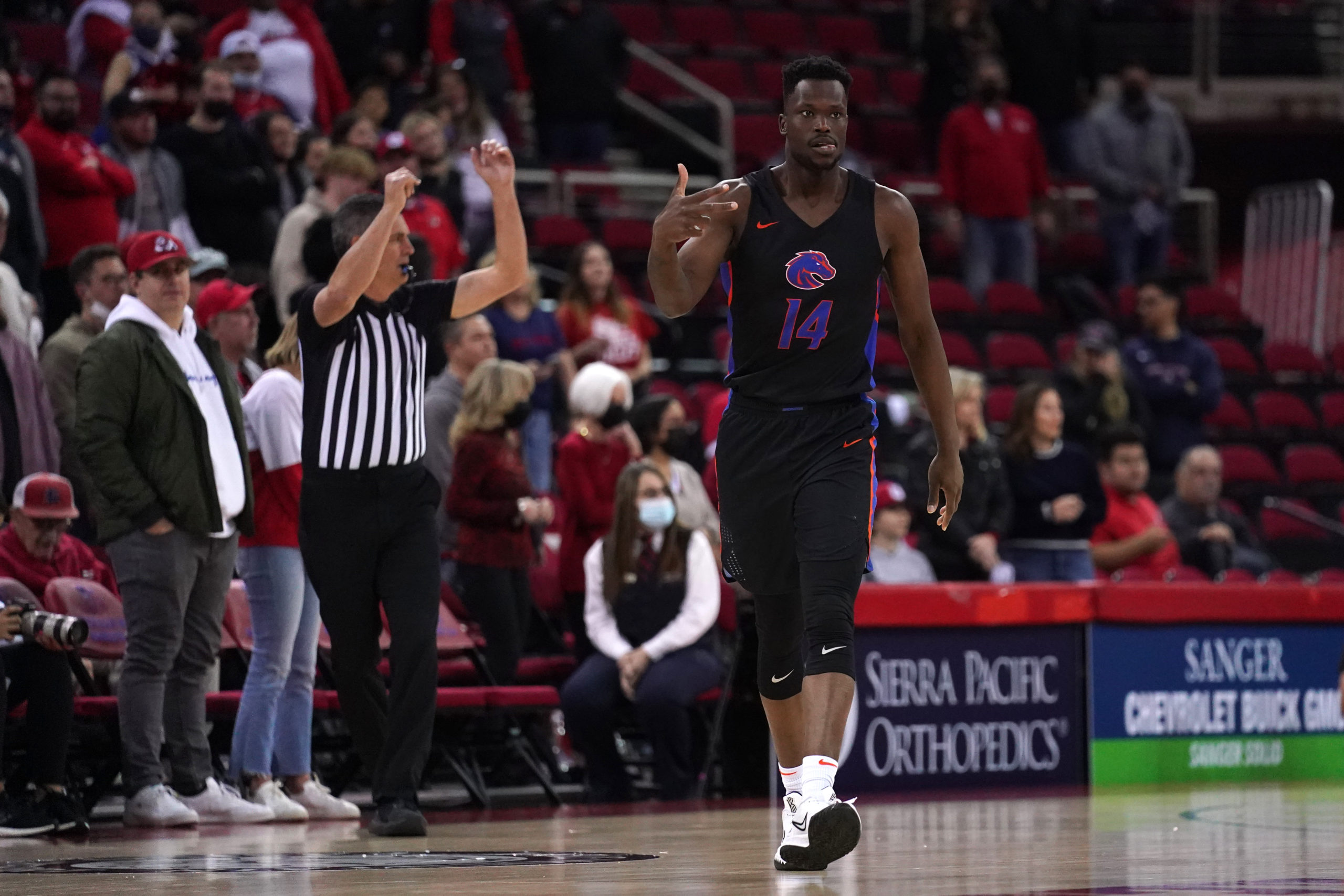 FRESNO – Trailing by three points with 4.9 seconds left on the clock, there was no doubt who was taking the shot to send Boise State to overtime with a chance to steal a win and climb out of the Central Valley victorious.

Marcus Shaver Jr. received the inbound, used a glorious pump fake to his advantage lifting the Fresno State defender off his feet, and hit the 3-point shot every young kid dreams about. The twist? It’s not the first time he has done it this season, and it’s not even the second.

The Broncos – and Shaver Jr. – did it again, defeating Fresno State 68-63 in overtime to extend their win streak to a school-record 14 games. The only team in the country with a longer win streak is Auburn at 16 – and the Tigers are ranked number one in the AP poll.

“That’s just big shot Shaver,” Emmanuel Akot told Bronco Nation News. “We know all of the work he puts in and how special of a talent he is. We know he’s going to deliver for us.”

After Fresno State embarked on an 8-0 run that put the Bulldogs up 53-50, Shaver Jr. hit the 3-pointer that sent the game to overtime to start an 11-0 Bronco run between the final seconds of regulation and start of overtime.

“Two guys switched on me for some reason when we have the most clutch dude in the country out there,” Max Rice chuckled. “They left Shaver open which was probably the biggest mistake of their season.”

Following a turnover late in overtime, Akot sealed the game adding to a team-high 16 points with a 3-pointer of his own and his fifth of the night, extending the Boise State lead to 66-61 in the final minute.

“I think having an experienced group that’s played in a lot of environments and understanding not everything is going to go your way,” Akot said. “We’ve been really good in the second half, and I think that’s credit to our coaching staff being really good and having experience.”

It’s been two full months since the Broncos has registered a loss, with wins over teams from conferences that include but are not limited to the American, West Coast and Pac-12. These wins have come through a COVID pause, rescheduled games and a treacherous road schedule traveling to some of the most unique venues in the country.

Possible NBA first round draft pick Orlando Robinson worked himself into foul trouble early thanks to two fearless charges taken from true freshman Tyson Degenhart. The Spokane native scored 8 points and drew five total charges, four of which were taken with Robinson driving to the basket.

“Those charges weren’t even close,” Leon Rice said. “It’s cool for you guys to be here and see how it really is … that was pretty remarkable.”

Max Rice dropped in a wide-open 3-pointer at 8:42 in the first half to even the game at 14, leading to a Fresno State timeout as the momentum shifted in favor of the Broncos. Rice finished with a season-high 13 points going 3-6 from deep while also taking a charge on the defensive end, contributing to his strongest performance of the season.

Have a night Max!

Rice has 13 pts along with 3 ast and your Broncos lead 49-45 with 3:23 to go!#BleedBlue | #WhatsNext pic.twitter.com/MlmzEkzrkA

Robinson asserted his will on the Broncos, and even though he left the first half early in foul trouble he opened the second half still being the leading scorer for the Bulldogs. With a Boise State 29-25 halftime lead, it took just 13 seconds for Robinson to bring his team within one possession.

Then he hit what was the most important play of the game for Fresno State to even the score at 49, connecting on a 3-pointer and getting fouled to erase a four-point deficit with 3:06 to play. Mladen Armus and the rest of the Boise State defense seemed to have no answer for the 7-foot junior.

Armus finished his night fouling out in 17 minutes contributing 0 points. Robinson finished with 21 points and has reached double figures scoring in 19 of the last 20 games he’s seen the court.

But the Broncos (17-4, 8-0 MW) care about one thing – the final score. They will ride their 14-game winning streak to Laramie, Wyo. at 7,220 feet on Thursday night at 7 p.m. with a chance to start Mountain West Play with a perfect 9-0 record and complete a season sweep of the Cowboys.

The matchup with Wyoming (5-1 in Mountain West play) was previously scheduled for New Year’s Day before a COVID-19 pause postponed the contest to Feb. 3. The game will be streamed on the Mountain West Network.

But for now, the Broncos will enjoy a rare rest.

“We need some days off and thank goodness we have a couple coming.” Leon Rice said.