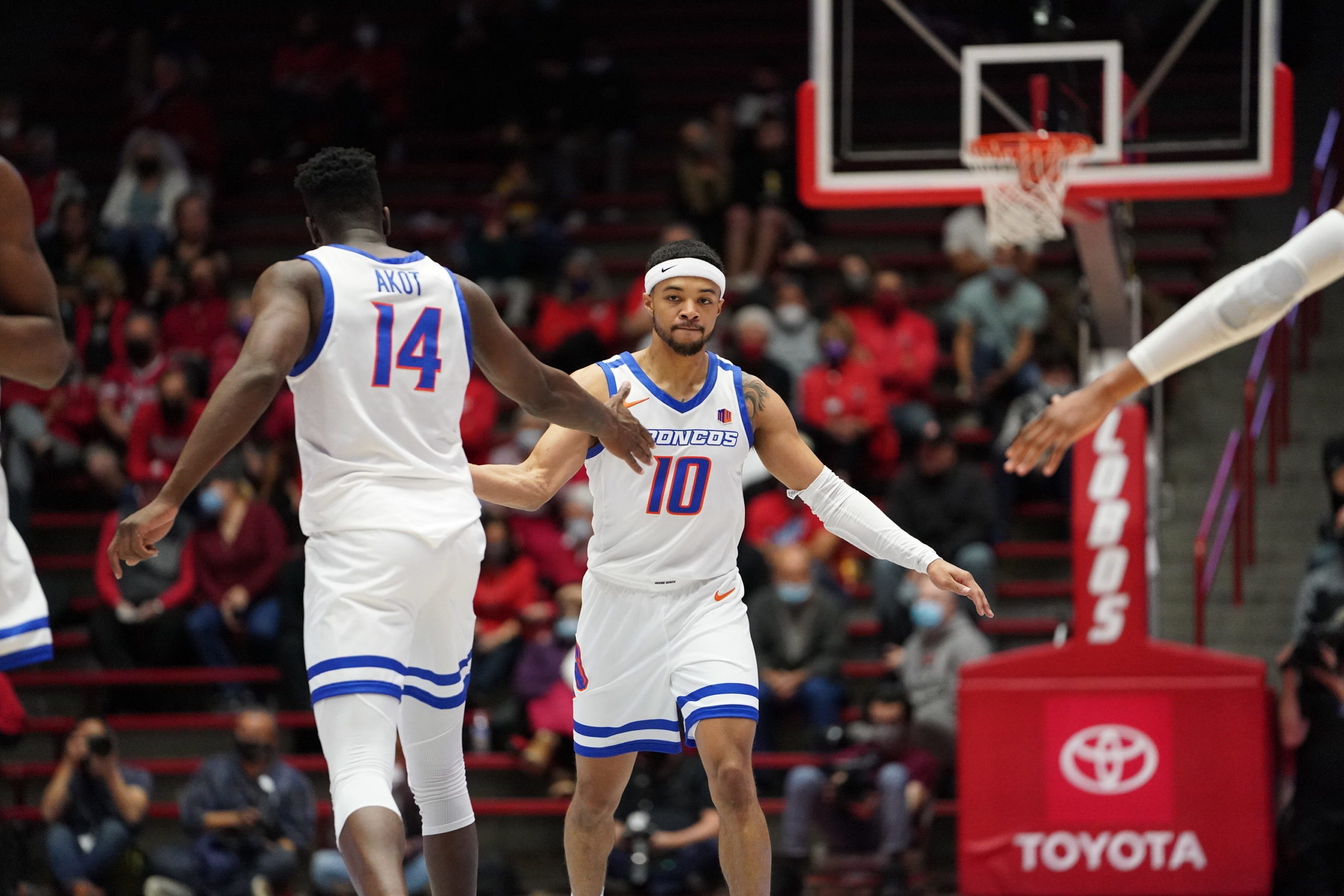 Boise State's Marcus Shaver Jr. (10) and Emmanuel Akot (14) slap hands during a 71-63 win for the Broncos at New Mexico on Saturday. (Photo by Tyler McFarland/Boise State Athletics).
By B.J. RainsJanuary 15, 2022

ALBUQUERQUE, NM — It certainly won’t be the prettiest win the Boise State men’s basketball team has this season.

But it was a win — the Broncos’ ninth in a row — so they’ll gladly take it.

Boise State (12-4, 3-0 MW) hasn’t lost since November and moved into sole possession of first place in the Mountain West standings.

“What a great win tonight in The Pit,” Boise State coach Leon Rice told Bronco Nation News. “It’s one of the storied places to play and we did what we had to do.

“Sometimes you have to just go win ugly. We tell our guys the best quality a team can have is they can find ways to win and that’s what these guys do.”

Marcus Shaver Jr. had 18 points and Naje Smith contributed 14 points off the bench for the Broncos, who will look to make it 10 straight wins when they host Air Force at ExtraMile Arena on Tuesday night at 7.

Boise State had a whopping 25 offensive rebounds, which led to 20 second-chance points. The Broncos took advantage of a big mismatch on the interior and finished with a 52-28 advantage on the boards.

“That’s a big credit to Mladen,” Smith said. “He works hard in the paint and battles and they didn’t have an answer for him. He’s a force to be reckoned with.”

Added Shaver, who pulled down six boards himself, “That’s something we take a lot of pride in, our rebounding and our defense, and it showed up tonight. As long as we rebound and defend, we’ll be alright.”

Boise State had been just 2-7 all-time in The Pit and had lost four of the past five here. And it started off somewhat rough, with the Broncos leading just 20-19 with 6:38 left in the half.

New Mexico got within seven early in the second half — but that was as close as they got. The Broncos kept the Lobos at arm’s length, leading by about 10 points for much of final 20 minutes.

“The beauty of these guys is they don’t get affected or hang their head when they miss a shot or something goofy happens to us or we miss easy shots or we miss free throws,” Rice said. “We don’t hang our head. They say, ‘so what, now what, and OK, we missed a free throw, let’s go get the offensive rebound’ and they make up for it. They stay calm.

“We preached to these guys that our defense and our rebounding, we’re going to hang our hats on that, so when you do have a night like this, it doesn’t matter and you can get out of here with the win.”

Neither Abu Kigab or Emmanuel Akot scored in the first half, but both eventually finished in double figures thanks to the foul line. Kigab had 11 points on 7 of 10 from the charity stripe, while Akot had 10 points on 6-of-10 shooting from the line.

The former first-team JUCO All-American has been really impressive of late, finishing with 14 points on 6-of-13 shooting — including 2 of 4 from 3-point range — and five rebounds in 26 minutes.

For all the talk of Boise State’s thin bench and lack of depth, Smith continues to deserve and earn more playing time — and is making it hard for Rice to take him off the floor.

“It feels great,” Smith said. “This is what I’ve been working for. I waited a lot last year and didn’t get much of a chance, but this year I’ve been hoping to show what I can do and help this team win.

“I’m just doing what I can to help the team win. The guys believe in me and I want to prove them right. … It’s what you dream of. I’be been ready to step up to the plate and play with confidence and do my best.”

Boise State will continue its crazy stretch of games Tuesday against the Falcons. It’s one of just two home games in January and the first since Dec. 28. Starting with a win at Nevada earlier this week, the Broncos are playing five games in five states in 11 days.

And so far, so good. Despite the less than super dominant win, the Broncos kept things rolling Saturday night and did what they needed to do — win.

“There’s one thing that matters, accomplish the mission, and we went 1-0 down here at The Pit which is a hard place to play and we all know that,” Rice said. “We went in there and celebrated. That’s college basketball. If you’re good enough to win a game like that under circumstances like that, that’s what good teams do.

“We haven’t been home in forever it seems like. It’s been a long time, so hopefully we have a big crowd on Tuesday. We can’t wait to be home.”