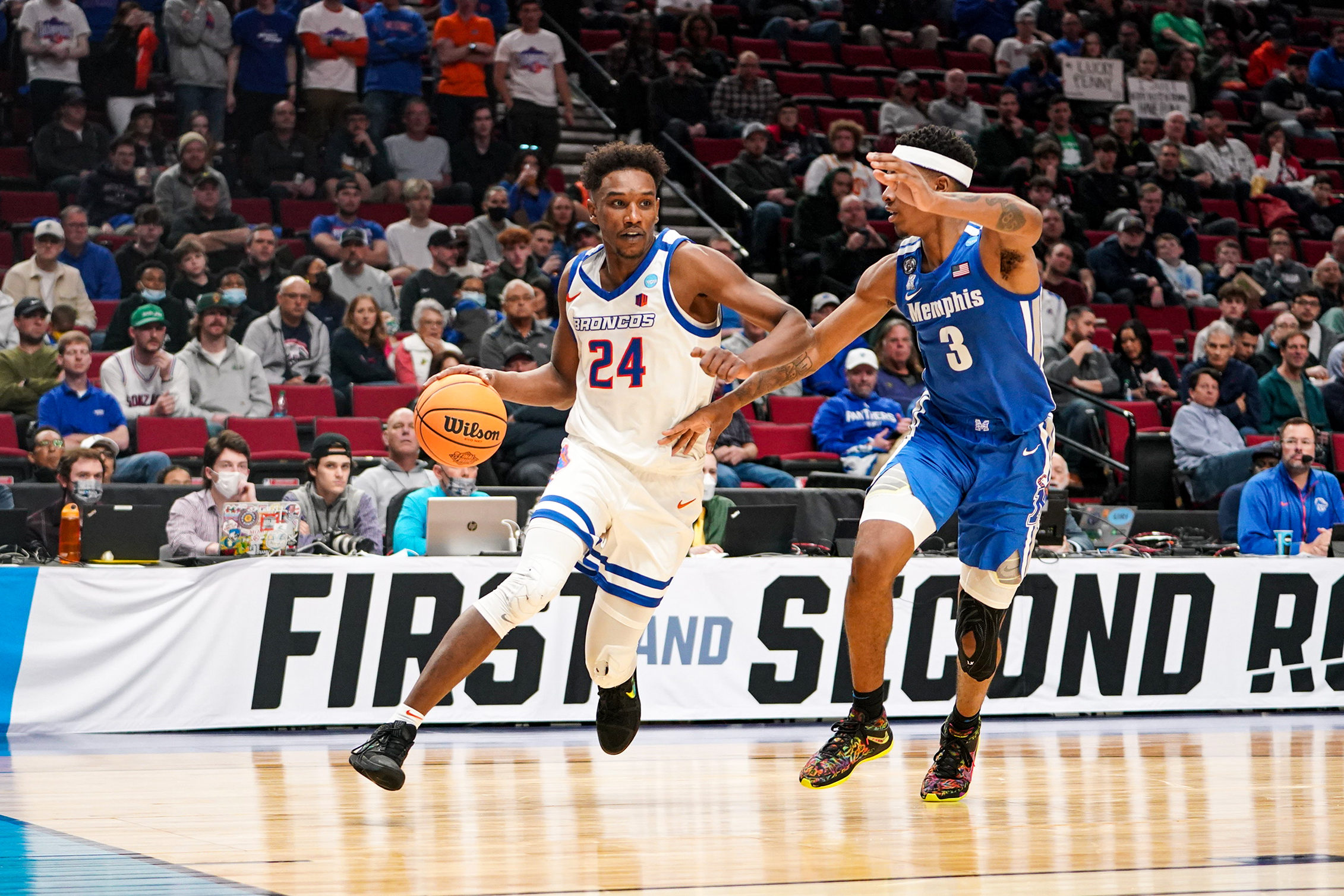 Abu Kigab drives to the hoop Thursday against Memphis in the first round of the NCAA Tournament at the Moda Center in Portland. (Photo by Boise State Athletics)
By B.J. RainsMarch 17, 2022

PORTLAND – A week or two from now, when Leon Rice and the Broncos reflect back on a historic, record-breaking season, they’ll have plenty of positives to smile about.

It was tough to do that on Thursday.

The Broncos, playing in their first NCAA Tournament since 2015, struggled early with missed shots and turnovers and fell behind by 19 points to 9th-seeded Memphis at the half. They stormed back and cut the deficit to 5 in the final minutes before eventually falling 64-53 at the Moda Center.

Boise State, the outright regular season and Mountain West Tournament champions, finishes with a program-record 27 wins. But not getting No. 28 stings, at least for now.

“This team will go down in history,” Rice said. “The great thing about these guys is they went out the way they played all year. They went down swinging. They didn’t roll over for anybody.

“They will be remembered for a long, long time, and the things they did to help this program to keep building.”

But for all the great, historic things the Bronco did this season, they came up one short of the ultimate prize. Boise State still has yet to win a game in the NCAA Tournament. The Broncos dropped to 0-8 all-time in the Big Dance.

It’s a team that will be remembered – but one that always will feel like it left something on the table.

“It’s definitely tough seeing it come to an end,” senior Abu Kigab said. “But our guys battled. And that’s all you can ask for. “I thought everyone did a tremendous job of just competing and sometimes it goes like that. It’s basketball.

“I’m proud of the guys and their will and determination and their attitude to just keep going in front of all the adversity that we went through. … I’m so proud of our guys and for just continuing to fight every single day.”

Kigab had 20 points – all in the second half including a stretch in which he scored 14 straight – as he tried to lead the Broncos on a historic comeback. And man, they were close.

That’s when Kigab started his run. His bucket with 9:45 pulled the Broncos within seven at 45-32 and sent Boise State’s crowd into a frenzy. A miracle comeback appeared to be happening.

“I was feeling it,” Rice admitted.

Five straight points from Memphis pushed the deficit back to 47-35, but a pair of Kigab 3-pointers and two free throws from the senior brought Boise State to within six at 51-45 with 5:12 left.

Kigab again pulled the Broncos within six on a bucket with 4:32 left, but he missed the ensuing free throw.

Twice the Broncos appeared to have steals during the late run but were called for fouls.

Then Boise State trailed 58-53 with about a minute to go when Degenhart appeared to have a defensive rebound. But he had the ball poked away from behind and soon-to-be NBA Draft lottery pick scored to push the margin to 7 at 60-53.

“If one of those plays goes the other way, you have the ball down five,” Rice lamented.

The Broncos couldn’t get any closer. The magic had finally run out.

Boise State players clapped and waved to fans as they walked off the court, soaking in a moment never guaranteed to happen again. The large contingent of Boise State fans cheered and waved back, thanking them for an unforgettable three-month ride.

The Broncos won 24 of their final 28 games after starting 3-4.  They finished with two championships when some where unsure they’d finish above .500. It was a year to remember – even though a rough first-half was just too much to overcome.

The 11-point loss, which came due to some late free throws, was the only double-digit loss for the Broncos this season.

“These guys never cease to amaze me with how tough they are,” Rice said. “We never got blown out and we were in jeopardy of getting blown out by a really, really talented team. … But these guys weren’t about to go away getting blown out. They fought and fought and it just got away a little bit at the end. I’m really proud of them.

“I was really proud of the second half…. That showed character and toughness.”

“I’m proud of the guys for staying together after going 3-4,” Degenhart said. “We could have folded but we really came together and made it a great season. I’m proud of our guys.”

The attention now turns to next season for the Broncos. Kigab is the only player out of eligibility. Seniors Armus, Shaver Jr. and Akot all have another year of eligibility left due to the COVID-19 pandemic, but it’s unsure who will elect to return.

Degenhart will for sure be back, as will contributors Max Rice, Smith and Lukas Milner. Rice is also high on those redshirting this season including athletic shooter RJ Keene.

Throw in a commitment from four-star, top-70 prospect Sadraque Nganga, and the Broncos appear to have the talent to make another run next season.

But those conversations and projections can wait a few weeks. For now, it’s about celebrating the greatest team in the history of Boise State basketball. Even if it didn’t end with that first NCAA Tournament win.

“The guys in the locker room are devastated,” Rice said. “They are such competitors. We got great kids in this program and tough kids.”

Asked what he told them in the locker room, Rice said, “Just how proud I am and how much I enjoyed the year. We all did. Every coach, every player – they were just a joy to be around. And they played like that.”