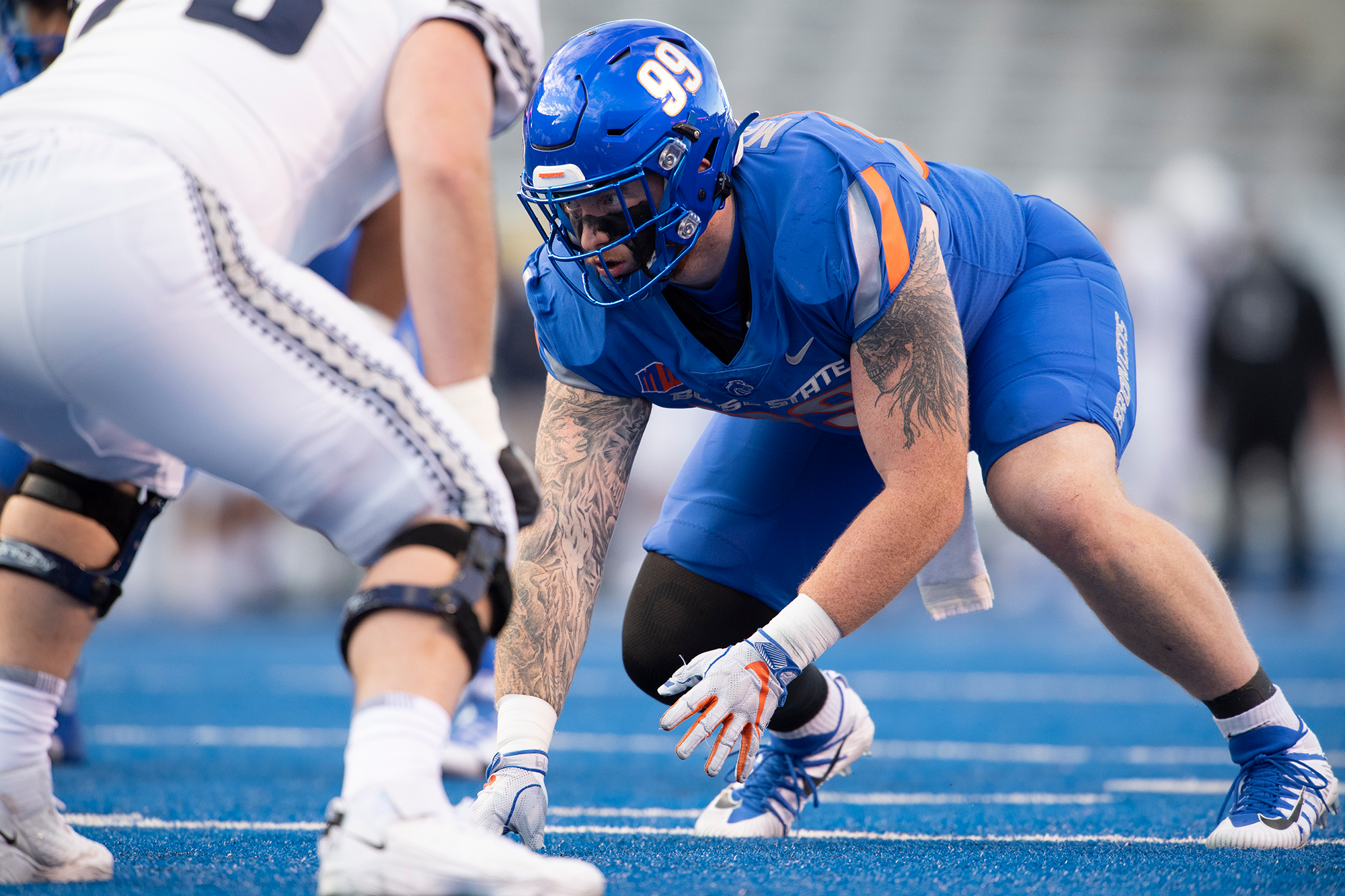 Boise State's Scott Matlock waits for the snap in a 2020 game against Utah State. (Photo by Boise State Athletics)
By B.J. RainsJuly 21, 2022

LAS VEGAS – Boise State landed four players on the preseason All-Mountain West team, which was announced Thursday in conjunction with the start of day two of the league’s media days at Mandalay Bay in Las Vegas.

Safety JL Skinner and defensive tackle Scott Matlock were voted to the defensive team by a panel of media that cover the league, while left tackle John Ojukwu was named to the offense. Kicker Jonah Dalmas was selected as the preseason all-league kicker.

Skinner was a second-team All-Mountain West pick a year ago after leading the Broncos in tackles (92) and fumble recoveries (3). He also had seven tackles-for-loss, five pass breakups and two interceptions.

Matlock, who is in Las Vegas representing the defense, had a team-high 8.5 tackles-for-loss and seven sacks in 2021. His 41 tackles led all Boise State defensive linemen.

Ojukwu has started 29-straight games at left tackle for the Broncos and is the most experienced player on the roster. He was named to the All-Mountain West First Team in 2021, and his preseason nod makes it six straight season the Broncos have had an offensive lineman on the preseason All-MW team.

Dalmas led the nation in field goals per game last season (2.17) while making a school-record 26. He was named to the All-Mountain West First Team in 2021, becoming the first kicker for the Broncos to land on the first team since 2015.

Both Matlock and Ojukwu will sit down with Bronco Nation News for live videos Thursday at Mountain West Media Days in Las Vegas. Make sure to follow BNN on Twitter, Facebook and YouTube to view the live broadcasts, which should be around 12:15 p.m. MT.

Mountain West brings back the MWC …by Bronco745410 mins ago

Reviewing the 2021 Boise State re …by Bronco74541 hour ago
Fan Poll
What bowl game would be best for the Broncos?
Latest Video