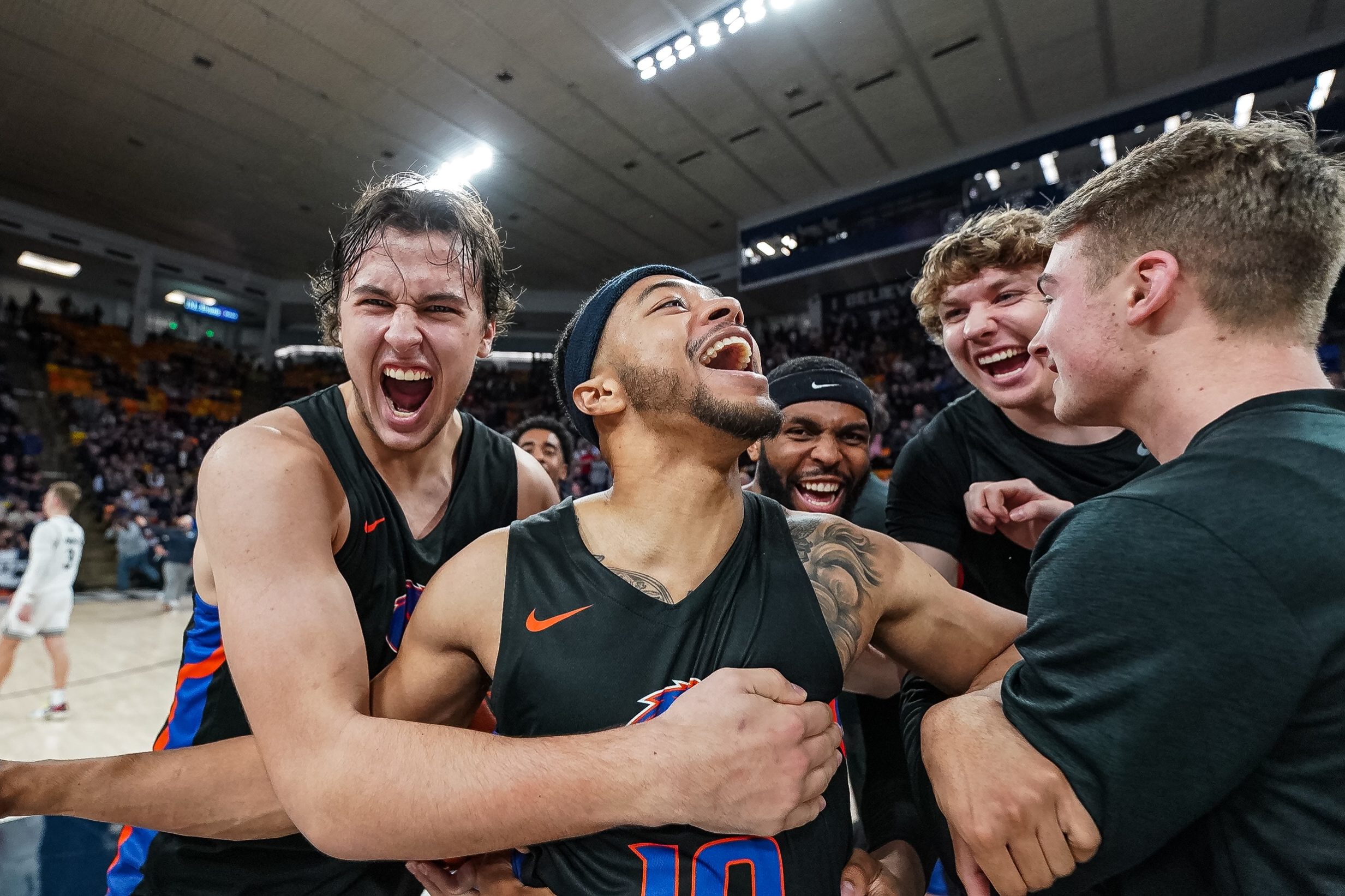 Marcus Shaver Jr. celebrates with his teammates after hitting a game-winning 3-pointer with 1.7 seconds left to top Utah State 62-59 on Thursday night. (Photo by Boise State Athletics)
By Collin MitchellJanuary 20, 2022

LOGAN, Utah – Marcus Shaver Jr. missed the first 10 shots he took Thursday night. He made the one that mattered.

Shaver Jr. connected on a 3-pointer from the top of the key with 1.7 seconds left to give Boise State a 62-59 win over Utah State at the Dee Glen Smith Spectrum.

The win is the 11th in a row for the Broncos, who also won in Logan for the first time since 2016.

“Sometimes shooters just got to shoot,” Shaver Jr. told Bronco Nation News. “I knew one had to fall for me … it was a big shot and I just knocked it down.”

The Broncos (14-4) haven’t lost in 51 days and are 5-0 to start Mountain West Conference play, something Boise State has done just twice since joining the conference.

“When that ball was in his (Shaver Jr.) hands and he started dribbling I knew that was a great spot for it (the shot) to be,” Rice said. “I know how good he is … that’s a great guy to have the ball.”

Shaver Jr.’s heroics were only possible thanks to an insane effort from center Mladen Armus, who had 22 points and 19 rebounds – including 10 offensive rebounds.

“We knew we couldn’t stop fighting and we knew we would fight until the last moment.” Armus said. “Losing wasn’t an option, we didn’t have it in our mind that we were going to lose.”

Abu Kigab flirted with a double-double scoring 15 points and tallying 9 rebounds to mesh with Emmanuel Akot’s 11 points and three blocks.

Boise State broke through the first of four-straight challenging conference games against teams ranked in the top 75 of KenPom. The Aggies opened at 65 in the rankings before falling after the loss.

Throughout the game Boise State was unable to develop a consistent scoring offense. The Broncos had six separate occasions in the first half alone with a scoring drought of two minutes or more.

The Broncos contained Bean to scoring a scarce six points the rest of the game. Bean grabbed his tenth rebound with 3:04 remaining in the first half and hauled in just two rebounds the rest of the way.

“This league is so competitive this year top to bottom,” Leon Rice said. “Show me who is an easy out – there isn’t any.”

Boise State travels to ‘America’s Finest City’ to face San Diego State Saturday night at Viejas Arena. SDSU is 10-3 overall and 2-0 in Mountain West play. The Aztecs are coming off a COVID pause and have not played since Jan. 8.

“We just have to take care of our bodies and lock in,” Shaver Jr. said. “It starts with watching film on the plane and lock in tomorrow for the scout (practice) and just come ready to play.”

Tip off between the two teams undefeated in conference play is at 7:30 p.m. MT, with CBS Sports Network televising the game nationally. Bronco Nation News will have two reporters live on-site in San Diego for full pre and postgame coverage as the Broncos look to extend their win streak to 12.