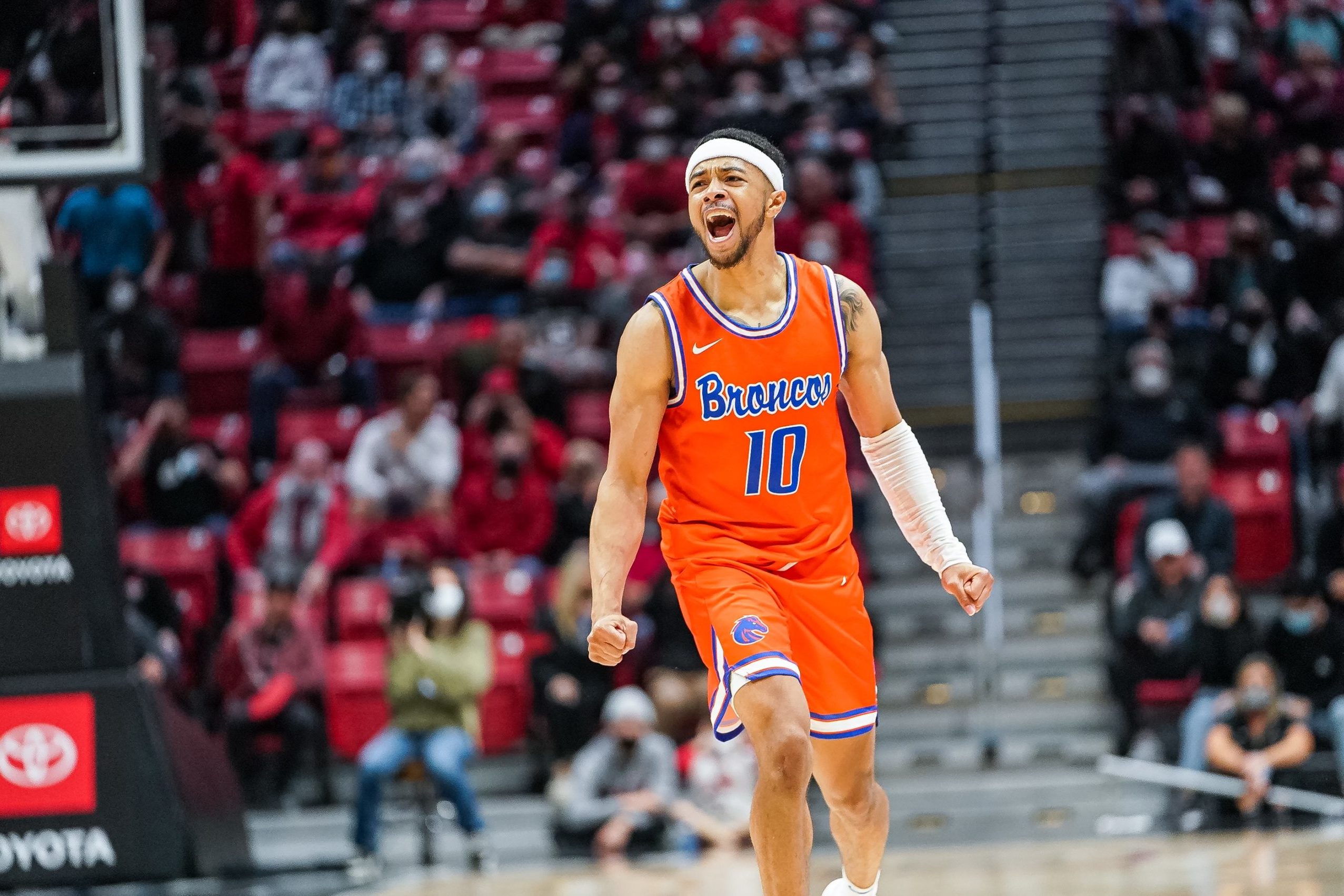 SAN DIEGO – Leon Rice could only lean back in his chair and shake his head. Hearing it again was just as crazy as experiencing it live.

The Broncos, who went nearly 10 minutes without a point in the second half, tied the game on two Tyson Degenhart free throws with 1:04 left and won it on a 3-pointer from Marcus Shaver Jr. with 26.4 seconds left.

Boise State had been 2-8 all-time in San Diego and hadn’t won here since 2016. But when things are going good, they are going good.

HIGHLIGHTS: Boise State pulls out 42-37 win at San Diego State. The Broncos have now won 12 games in a row and improve to 6-0 in conference play. pic.twitter.com/bjbLi6DprA

In a span of 11 days Boise State won games at Nevada, Utah State, New Mexico and San Diego State. It’s the first time in program history the Broncos recorded road win in all four cities in the same season – and they did it in less than two weeks.

“Think about that,” Rice said. “There’s not a lot of teams in the history of the Mountain West that can say that. And to do it in such a short amount of time, it’s remarkable.”

Saturday’s game was maybe the most remarkable of them all. Calling it a defensive slugfest would be an understatement. The right description is hard to find.

Degenhart’s two free throws with 1:04 left were the Broncos’ first points since the 10:55 mark. But San Diego State scored just 13 points during that stretch to keep the Broncos in it.

The halftime score was just 23-22. It was even worse in the second half, with the Broncos winning the final 20 minutes 20-14.

Neither team could buy a bucket – until Shaver Jr. brought the heroics for the second straight game.

Less than 48 hours after hitting a go-ahead 3-pointer to give the Broncos a win at Utah State, Shaver Jr. drilled another 3 from near the Boise State bench to put the Broncos in front.

“It was crazy man,” Shaver Jr. said. “I just knew what happened the other night and I don’t know, something just came over me. I told Tyson we weren’t losing this game. Coach Rice drew up a play for me and he told me to go win this game and that’s what we did.”

San Diego State missed a desperation 3 and Degenhart clinched the game with two late free throws as the Broncos ran their improbable winning streak to 12 games.

Boise State was 3-4 at one point this season and scored 39 points in an embarrassing home loss to CSU-Bakersfield. The Broncos then dismissed Devonaire Doutrive from the team following an overtime loss to Saint Louis a few days later – and haven’t lost since.

The Broncos haven’t lost since Nov. 30 – a span of 53 days – and the rest of the country seems to be taking notice. ESPN Bracketologist Joe Lunardi now has Boise State in his NCAA Tournament bracket – even with the Broncos not in first place in the Mountain West.

Boise State is also up to No. 41 at KenPom and figure to soon start getting votes for the Top 25.

It’s an unexpected run – but one the Broncos are going to try to enjoy. And keep going.

“We can’t be satisfied,” Shaver Jr. said. “We have to keep this going.”

Boise State returns home to face Wyoming (15-2, 4-0 MW) – the only other undefeated team in the Mountain West – on Tuesday at 7 p.m. at ExtraMile Arena.

A win would tie the school record with a 13th straight win.

“These guys are amazing,” Rice said. “They are fun to coach and great to be around and great to travel with. … And we need the fans. These guys have been playing their hearts out and it takes a lot of energy. You saw how loud it got in here when they tied it and we need that on Tuesday to make it the most hostile environment.

“We’ll celebrate until about midnight and then it’s OK here we go. Same soup, just reheated.”