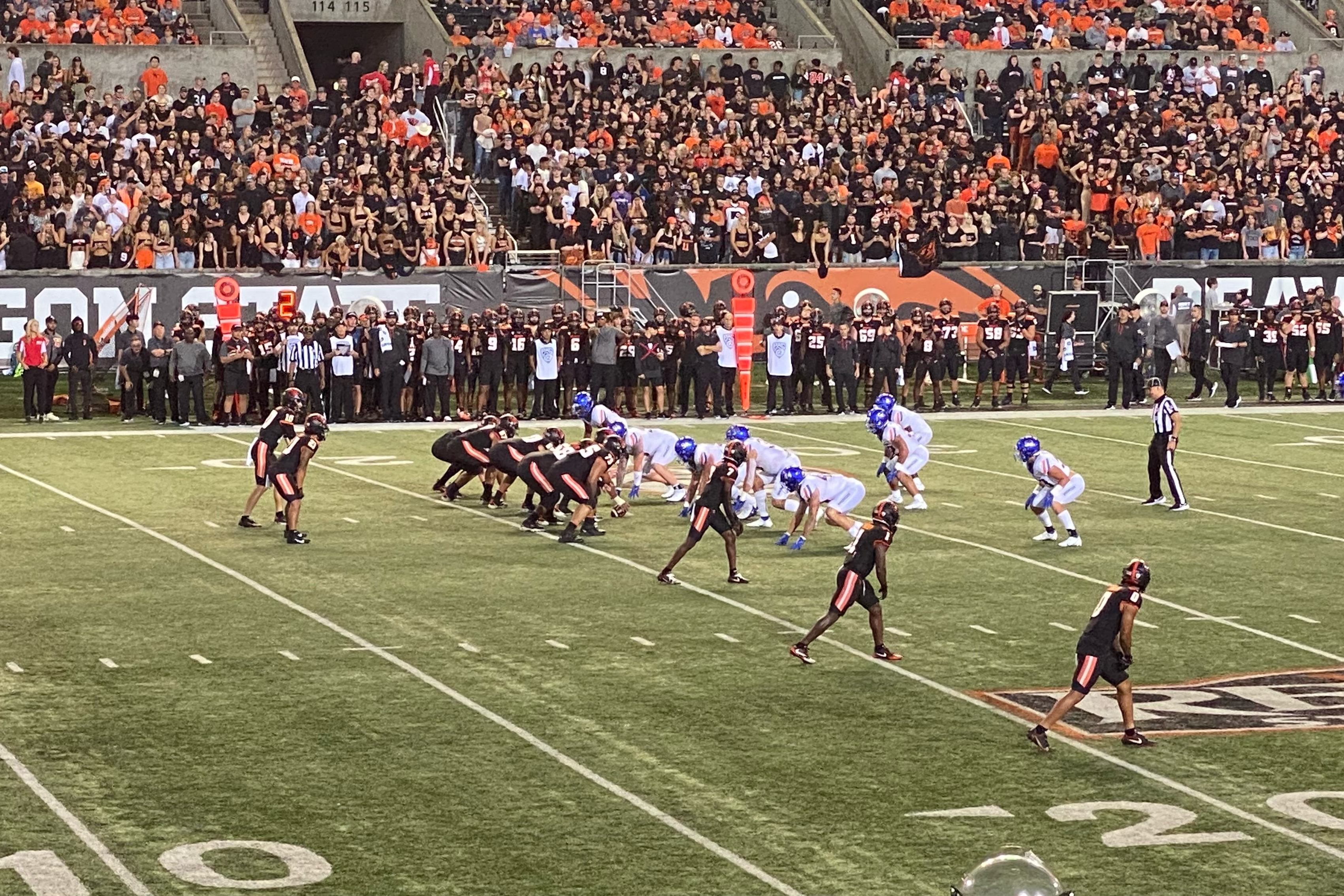 Boise State and Oregon State battle it out in the first quarter Saturday night at Reser Stadium.
By B.J. RainsSeptember 3, 2022

But the final score seems like a distant side story.

It wasn’t just that the Broncos were dominated on national TV and committed five turnovers to lose the opener for the second time in two seasons under coach Andy Avalos.

It was a much more surprising – heck shocking – development in the second quarter. That’s when Boise State benched starting quarterback Hank Bachmeier after the four-year starter committed three turnovers on the first six drives.

Green came in and played well – he rushed for a 74-yard touchdown in the fourth quarter and helped Boise State momentarily turn a 27-3 deficit to a 27-17 game – but what the Broncos do from here figures to be the talk of the town for the next week.

Will the Broncos stick with the talented redshirt freshman and turn the keys over to their quarterback of the future earlier than most expected? Or do they go back to Bachmeier, who had two bad interceptions and lost a fumble but has started 26 career games -including all 12 last year.

It’s quite the mess for Avalos, who drops to 7-6 as Boise State’s head coach.

This story will be updated shortly with postgame quotes from coach Andy Avalos on the dilemma.

Bronco Nation News will also have a live postgame show from Reser Stadium with highlights, interviews, analysis and more. The show will start roughly 45 minutes after the game finishes and be broadcast on the BNN YouTube, Twitter and Facebook pages.

Bachmeier was 4 of 8 for 30 yards and two interceptions and the lost fumble. Boise State had just 22 total yards on 17 plays with him in the game prior to Green entering early in the second quarter.

One positive? Boise State’s defense had three turnovers – interceptions from JL Skinner and Caleb Biggers and a forced fumble from Ezekiel Noa and a recovery from Biggers.

Boise State’s defense came up with the turnover on its first drive of the season when Noa forced a fumble on Oregon State’s Deshaun Fenwick and Biggers fell on it.

It didn’t get any better. Bachmeier was hit and fumbled the ball on Boise State’s next possession and Oregon State added a field goal to go up 17-0.

That’s when Boise State made the switch to Green, who trotted onto the field for Boise State’s next possession as Bachmeier donned a headset on the sidelines.

Boise State had 89 yards on 20 plays with Green under center to finish the first half compared to 22 yards on 17 plays for Bachmeier.

The Broncos were on the doorstop of scoring and cutting the deficit to 17-7 but freshman Ashton Jeanty fumbled at the 2-yard line and the Broncos came up empty.

The Broncos looked like they’d at least avoid the shutout in the first half – but in an almost fitting end – kicker Jonah Dalmas shanked a 32-yarder as time expired in the first half. Dalmas was 26 of 28 last year on field goals and made the most field goals of any kicker in the country.

Boise State stuck with Green in the second half and the redshirt freshman took advantage of the unexpected playing time.

Green scored on a 74-yard touchdown run, juking two defenders before cutting it to the outside, to pull the Broncos within 27-10 with 2:10 left in the third quarter.

He then found freshman Ashton Jeanty for a 36-yard pass to get the Broncos down to the 4, and Green barreled his way into the end zone on a keep er on the next play to cut the Oregon State lead to 27-17 with 13:05 left to play.

But after a questionable pass interference call on third down extended an Oregon State drive, the Beavers put the game away with a 41-yard touchdown run from Jack Colletto with 10:39 left in the game.

Boise State is back on the road next week for a Friday night game at New Mexico. Kick off is slated for 7 p.m. MT and the game will air nationally on CBS Sports Network.

This story will be updated…