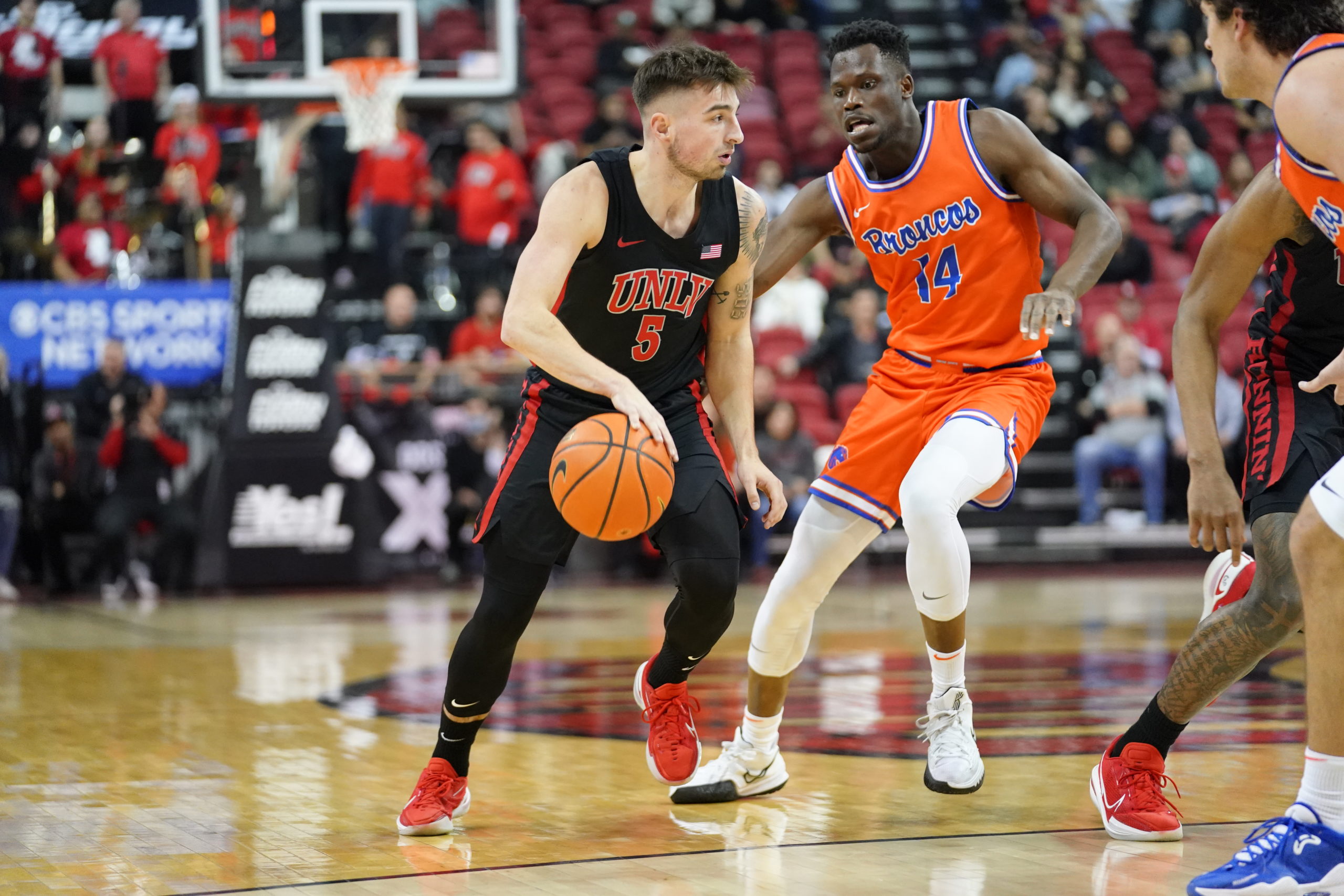 LAS VEGAS – A year ago on his senior night, Abu Kigab suffered a torn labrum in his shoulder and watched helplessly from the bench in the final minutes as Boise State saw its NCAA Tournament hopes fade away in a bad upset loss to Fresno State.

Tuesday he’ll get a second senior night – and it could include cutting down the nets, hoisting up the Mountain West championship trophy and celebrating as confetti falls from the sky.

Not even he can believe it.

Kigab scored 23 points Saturday night to help Boise State pick up a big 86-76 road win at UNLV – setting the stage for what could be one heck of a party at ExtraMile Arena.

Boise State (23-6, 14-2 MW) can now clinch at least a share of its first Mountain West title since 2015 with a win over Nevada in the final home game of the season.

“It would be amazing,” Kigab told Bronco Nation News. “It’d be a Disney movie for me. I never would have thought this would happen. But we’re making it happen.”

Marcus Shaver Jr. had 27 points to lead the Broncos, who let a 13-point lead slip away in the second half but made big buckets down the stretch and pulled away to tie the program record with a 14th conference win.

Tyson Degenhart added 10 points and Emmanuel Akot had nine for Boise State, which is 20-2 in its past 22 games dating back to November.

Once 3-4 following back-to-back losses to CSU-Bakersfield and Saint Louis, the Broncos now are one win away from winning a share of the league title – and two wins in their final two games from winning it outright.

“It feels good man but we’re not satisfied,” Shaver Jr. said. “We’re going to stay hungry. … I just love these guys, these coaches and we’re just having a great time and we want to keep it rolling.”

Boise State had 13 offensive rebounds, which led to 21 second-chance points. The Broncos also committed just eight turnovers and made 11 of 24 shots from 3-point range (45.8 percent).

For the game the Broncos shot 53.4 percent (31 of 58) while continuing a recent stretch of impressive games offensively.

Boise State scored 42 points in a win against San Diego State earlier this year and just 39 points in the loss to Bakersfield. They had 86 points Saturday against one of the better defensive teams in the league in UNLV.

The Broncos led by as many as 13 points but UNLV took a 62-60 lead on a 3-pointer from Bryce Hamilton with 12:08 left in the game. The teams traded buckets and the score remained tight before Shaver Jr. did what he’s done all year – finished things.

UINLV never got any closer and the Broncos hit just enough free throws down the stretch (they were only 13 of 25 for the game) to keep the Rebels at arms length.

Fans headed for the exits as Boise State celebrated another impressive win – one which inched them even closer to a league title and a spot in the NCAA Tournament.

“That was really remarkable what these guys just did,” Rice told Bronco Nation News. “These guys are so tough and they just find ways to do get it done. This was a different game than most of the league games we’ve played because of how many possessions there was and I didn’t go deep down the bench.

“Credit to my guys. We have a great defensive team and our offense is getting better and better.”

Rice wanted no part of talking about a potential celebration on Tuesday, cutting off a question about cutting down the nets and celebrating with the trophy should the Broncos win on Tuesday. He’s worried about trying to find a way to win, first.

“All those things you said is not what we’ll focus on,” Rice said. “The bottom line is we’re playing a team with two of the most talented guards in the league, the bigs are terrific and they are going to put it together. I know they have excellent coaches and we have to battle on Tuesday.

“Don’t be deceived by their record or where they are in the standings. They’ve had some adversity and they are a dangerous, dangerous team. We have a lot of respect for them and we know they are going to come to play.”

Rice may not want to look ahead, but Kigab did. And who could blame him with the journey he’s been on. He was honored last year on senior night only to return for another year with the Broncos due to the injury.

That’s certainly proven to be a great decision – both for him and the Broncos – and it could culminate on Tuesday night with a league championship.

“It feels great to get the win tonight but we’re not satisfied,” Kigab said. “We have to go home and play Nevada on Tuesday and we’re excited about that.

Mountain West vs. PAC 12 in footb …by ian6 mins ago

Casey Kline entering the transfer …by ian14 mins ago

Boise State is 1st team to haveby Bronco74541 hour ago
Fan Poll
What bowl game would be best for the Broncos?