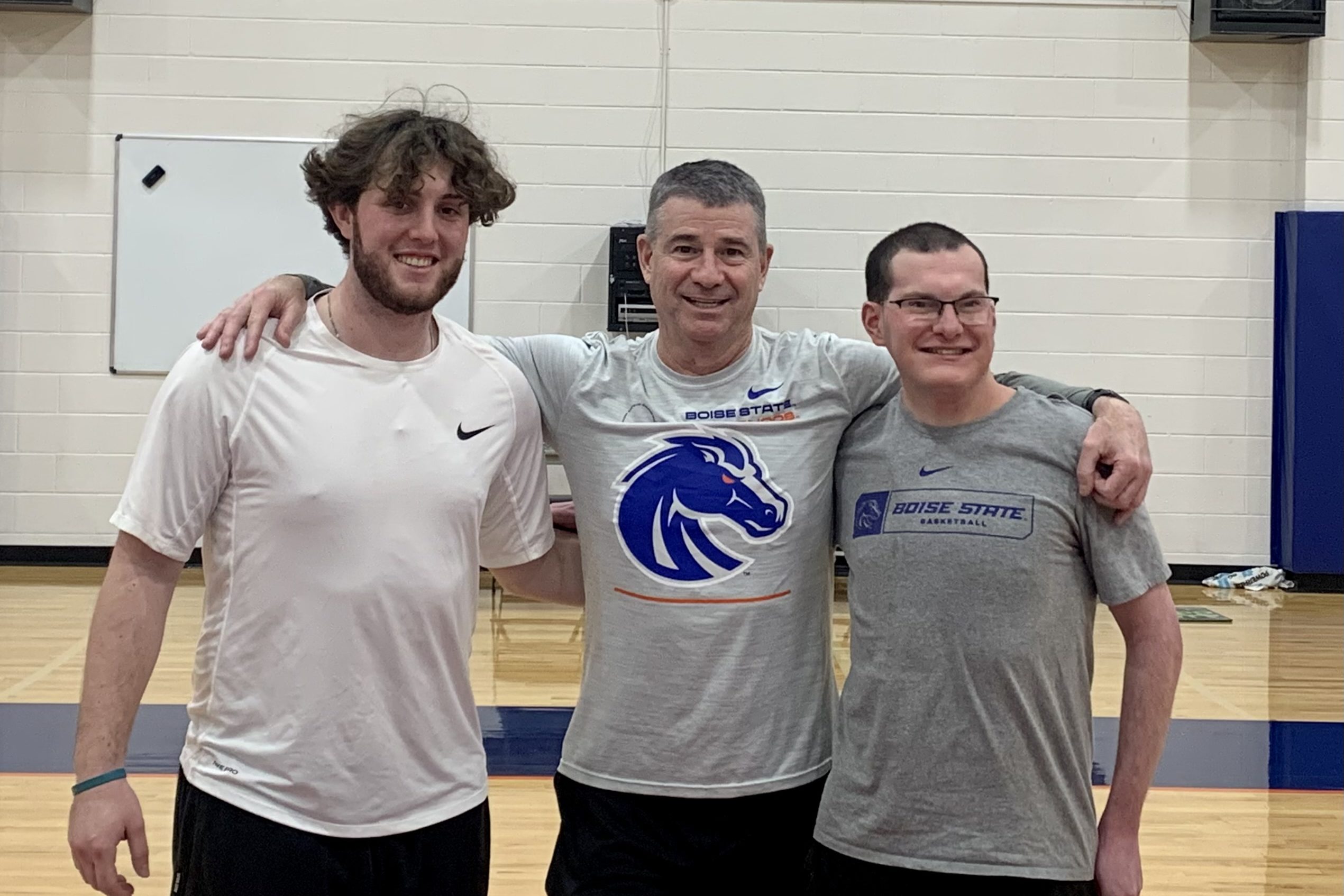 It was nearly 34 years ago when Leon Rice nervously walked up to Oregon coach Don Monson in a bar and asked for a job.

Tuesday night Boise State’s 12th-year head coach will be at center court prior to the home finale against Nevada (7 p.m., FS2) to honor Monson’s grandson MicGuire, who has spent the past three years as a student manager for the Broncos.

Rice landed his first college job in 1988 as a graduate assistant at Oregon under Don Monson. But it wasn’t easy.

After getting close to 90 rejection letters back, he noticed the one from Monson was hand-written, which he took as glimmer of hope. When he caught word a few weeks later that Monson would be recruiting at a tournament a few hours away in Yakima, Washington, he drove there and went to a bar where he heard the Oregon coach would be.

Rice previously joked that he waited for Monson to have a few beers before approaching him. And it must have worked – Monson agreed allow him to be a graduate assistant for the Ducks.

Rice later became best friends with Monson’s son Dan – the current head coach at Long Beach State – and the two families have remained close. And more than three decades after Rice got his start thanks to Don, he helped give MicGuire his start in coaching by inviting him to be a manager at Boise State.

“It’s been so cool,” Rice said. “To me it’s sad because it went by so quickly. He’s graduating early because he’s such an over-achiever but we’re going to really, really miss him and I’m going to be sad about that because I’d like to have him back.”

Rice called it an “emotional moment” while describing the phone call he and MicGuire made to Don Monson a few years ago when it was decided he would be a manager for the Broncos.

Don was on the dock at Priest Lake when the two called him on speaker phone.

“It meant the world to Don that it came full circle,” said Rice, who started to get emotional himself while recounting the story.

MicGuire Monson has spent the past three years as a manager soaking up whatever knowledge he can from Boise State’s coaching staff while also getting to spend more time with Rice and his family.

Monson has been friends with Brock, Max and Kade Rice pretty much his entire life.

“It’s been awesome,” MicGuire Monson said. “I have coach Rice as an uncle, and coach Burns is an uncle. It’s been amazing. … It’s an opportunity of a lifetime that he gave me. It’s been pretty awesome.”

MicGuire plans to follow his dad and grandpa into the coaching profession. He’ll likely start his career working for his dad next season at Long Beach State, possibly as a graduate assistant, but said he also has potential options at the JUCO or Division II level to consider.

“MicGuire is going to be a rock star as a coach,” Rice said. “He’s going to be a third generation coach and he may be 21 in real years but it’s like having a 40-year-old assistant on my staff because he’s seen it and done it and been there.

“He epitomizes one of our maxims, which is serve. He wakes up every day and says how can I make this team better. And he does, no matter how small the task is. It might be scrubbing the floor in the locker room to get a small spot that somebody spilled. Whatever it is to make us better.”

If MicGuire ever becomes a head coach, there’s one thing we can probably assume: he’ll have a spot waiting if Rice has a grandson wanting to become a coach.

Monson isn’t the only senior manager working his final home game on Tuesday night against Nevada. Jake Goodman will also be honored before the game after four years as a manager.

“It’s been a blast,” Goodman said. “I’ve been connecting a lot with the coaches and the staff and the player and making some connections for when I go outside of college to find my next job, hopefully in the sports industry. It’s been quite a journey these last four years.”

Goodman spent four years as the manager of his high school team at El Toro High School at Lake Forest, California. He wanted to be a manager for a college team, and landed a spot at Boise State thanks to a mutual connection with the head coach at El Toro High.

He’s not sure what is next, but hopes it has to do with sports.

“Behind the camera, in front of the camera, doing stats, coaching, broadcasting, anything in the sports industry I won’t say no,” Goodman said. “Ever since I grew up sports has been my love. I played little league and soccer and then I went into umpiring and I also announced my little league all-star game for like seven years. I’ll do anything as long as its in the sports industry.”

Goodman credited his dad Scott for his love of sports and said it will mean a lot to have his dad by his side when he’s honored prior to Tuesday’s game.

“He’s basically the one who taught me to love sports,” Jake Goodman said. “He brought me to 2010 Game 7 Lakers-Celtics. I sat on his lap for the 2002 World Series Game 7 between the Angels and Giants. He taught me to love sports and the game of basketball. He took me to more Lakers games than I can remember, so I’m glad to have him by my side when I get my recognition.”

Rice said Goodman was a “terrific” member of the program.

“You walk into the gym and you look in there and a manager is always rebounding and helping,” Rice said. “They are the epitome of our maxim. Both Jake and MicGuire exemplify that.”

It’s been a memorable four years for Goodman, but he hopes the best is still yet to come.

“As a senior its been great because especially my last year I wanted to make it the best we could possibly do and get the most wins, but I never expected us to be this good and possibly going to March Madness. That would be my dream come true to possibly be cutting those nets and going to the tournament.”

Abu Kigab will get the headlines and loud cheers on Senior Night. Both Monson and Goodman deserve some as well.