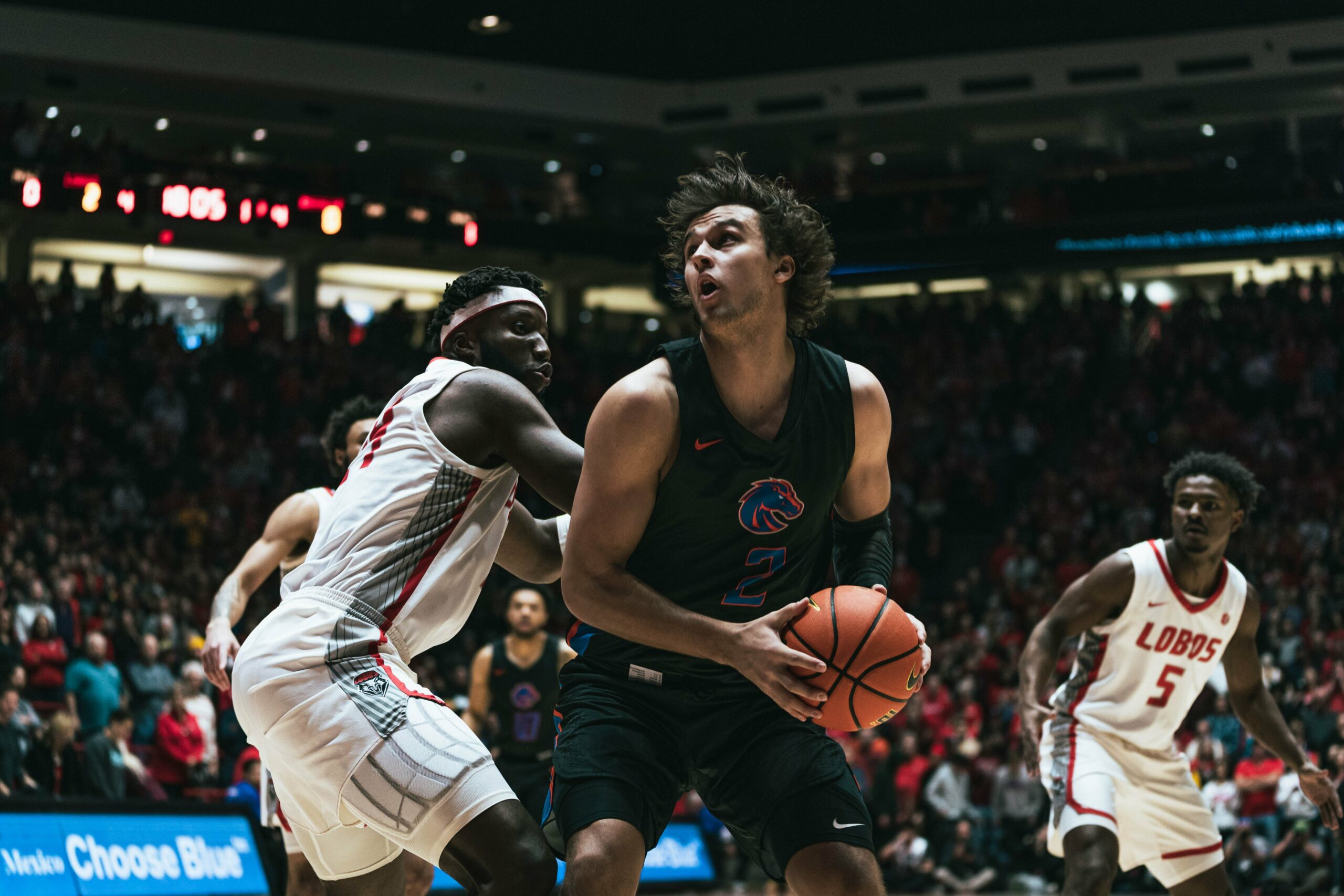 Boise State's Tyson Degenhart goes up for a shot during a 81-79 overtime loss at New Mexico. (Photo by Boise State Athletics, taken from Twitter)
By B.J. RainsJanuary 21, 2023

ALBUQUERQUE, NM – Listening to Leon Rice talk, you might have thought his team won.

That’s how impressed he was with his group despite a heartbreaking 81-79 overtime loss at New Mexico on Saturday.

The Broncos (15-5, 5-2 MW) battled in easily their most hostile and toughest road environment of the season, tying the game on a 3-pointer from Tyson Degenhart with 1.3 seconds left before ultimately falling on a Morris Udeze bucket with 2.6 seconds left in overtime.

“Couldn’t be more proud of all our guys,” Rice said. “It was a special, special effort by our players. Two great teams and somebody had to win.”

A win likely would have propelled Boise State into the Top 25 on Monday. The loss didn’t hurt much though: The Broncos stayed No. 19 in the NET and No. 24 at KenPom on Saturday morning.

Degenhart had a career-high 28 points and took over down the stretch. After sending the game to overtime with the 3-pointer, he nearly sent the game to a second overtime when he scored on a driving layup, got fouled and made the ensuing free throw to tie the game again in the final minute of overtime.

But New Mexico called time out with 4.0 seconds left and the ball under their basket, and a miscommunication on a switch let Udeze cut to the basket and score on an easy short shot.

The Broncos got the ball to Marcis Shaver but his off-balance 3-point attempt from just across the center court line missed and a crowd of 14,556 went crazy in celebration.

“They competed their tails off against a lot of adversity,” Rice said. They were terrific. Just terrific. I couldn’t be more proud of our guys.

“I love this team. They are special. Maybe one of the toughest teams I’ve ever coached. They just stayed above the fray and did their jobs and competed.”

Boise State led 37-31 at the half but couldn’t make enough defensive stops down the stretch. New Mexico made 12 of 16 shots to finish regulation, and burst out to a quick 5-0 lead in the first 55 seconds of overtime.

Jamal Mashburn Jr. had 25 points for New Mexico, while Jaelen House had 16 and Udeze had 15.

New Mexico, which improved to 18-2 overall with the win, plays at Boise State on Feb. 22.

“Those guys are really good,” Rice said. “They weren’t 17-2 by accident. Those bigs are so physical and terrific and get after you and the guards are shot makers. And they have a bench, they have great coaching, a great atmosphere – I mean there’s a lot going against you when you play New Mexico and our guys counterpunched every single time.”

The near sellout crowd was the largest the Broncos have played in front of this season. It impacted everybody, including the officials. Rice was displeased with the officiating for much of the game, including when a flop was called on Degenhart and then when no call was made at all when both Degenhart and Shaver fell to the floor on separate plays.

Rice also took issue with an incident at halftime in which the New Mexico baseball team lined both sides of Boise State’s hallway and jawed with the players as they tried to make it back to the court for the second half.

“I’ve coached for 35 years and that was one of the worst situations I’ve even been in at halftime,” Rice said. “That needs to be addressed by the Mountain West. We’re not lining up our football team and make their team run through them. The administration apologized and great, but that could have been a riot up here at halftime. We had to run through the baseball team and they were in our face and I had to get our team through quick as we could.

“It was so poorly handled that I’m really, really disappointed that something like that goes on. I’ve coached 35 years and I’ve never had that. Never. Never had to do something where you’re coming out of your locker room and having to run through 30 guys in your face. They were on both sides of the hallway, in our face yelling. I’ve had some guys over the years where that would have ended in a brawl.”

Rice added the halftime incident to the long list of reasons why he was pleased with his team despite leaving town with a tough, last-second loss.

Boise State, which is now a game behind first place San Diego State in the loss column, returns home for a pair of games Tuesday against Fresno State and Saturday against Colorado State.

“We played really hard,” Degenhart said. “They are a great team. Credit to them. We just have to learn from it. We make a couple more plays and we’re going to win that game.

“We stayed together really well and it’s something we’ve worked on since Myrtle Beach. As long as we stay connected in those moments we can win any game we’re in, so we just have to keep learning from it and get better.”