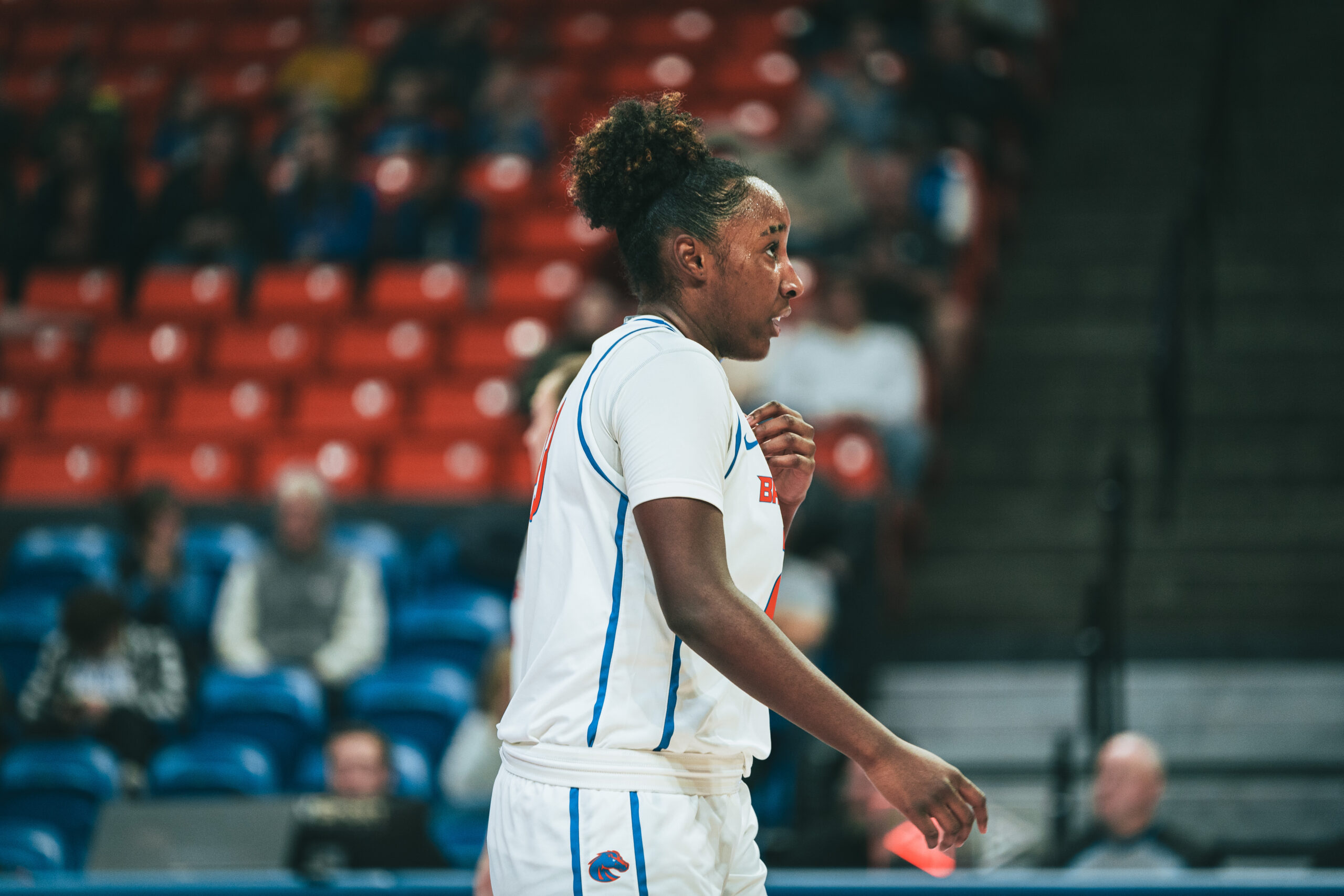 Elodie Lalotte walks down the court in preparation to shoot a free throw. (Photo courtesy of Boise State Athletics)
By Collin MitchellJanuary 19, 2023

BOISE – The Broncos needed just one thing Thursday night to get their season back on track – a win.

Boise State did just that, defeating Fresno State 60-53 while having all 10 Broncos that touched the court score on the Bulldogs.

The separation in the score had much to do with Boise State forcing a run in each half, keeping a muzzle on the Bulldogs.

After the run started at the 3:21 mark, the Broncos never trailed the rest of the game.

“I was pleased with the resiliency at the end,” Coach Gordy Presnell said after the win. “You know last year we probably lose that game. So I felt good about that.”

Freshmen Mya Hansen and Dani Bayes, the leading scorers for the Broncos so far in conference play, showed out with another impressive performance. Bayes scored 10 points and Hansen tallied seven of her own to complement her two assists.

“They’re great,” Forward Abby Muse said. “They really give us the boost that we need to go over that hump like we saw today.”

Muse scored seven points herself to go along with four rebounds and three blocks before eventually fouling out of the game in the fourth quarter.

Forward Elodie Lalotte also fouled out of the game in the fourth quarter, though still finished with eight points and seven boards. The junior from Paris, France received a technical foul, her fifth foul of the game, after standing over a Fresno State player and mouthing some unknown words.

“You know, I was giving them (the referees) a hard time about ‘Well what’d she say? What’d she say?’ because English is her second language,” Presnell laughed. “Well was it French? What’d she say? You don’t know what she said if it’s French!”

After a hard-fought win over a conference opponent and moving to .500 in conference play, the Broncos can laugh all they want – but not for long.

Boise State will travel to Albuquerque on Friday for a Saturday matinee matchup with New Mexico at The Pit before coming back to Boise for a three game homestand.

“The schedule is difficult,” Presnell said. “Now we get in the plane and go to Albuquerque to play there.”

The showdown in the 505 will end a stretch of five games in 11 days for the Broncos, four of those games having come against the Mountain West’s top competition.

Boise State women back at home looking to get on track
January 18, 2023