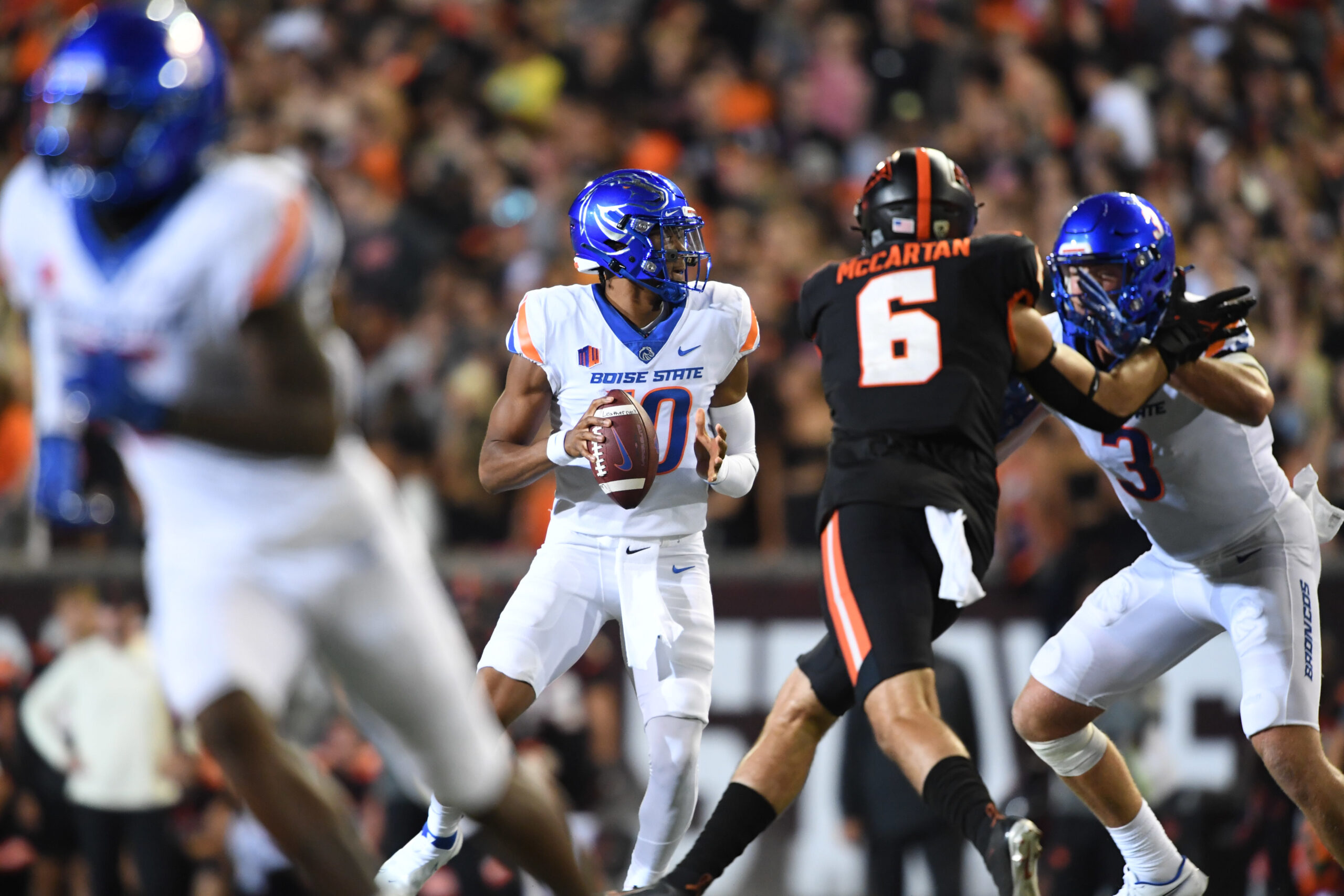 The Boise State football team will look to stay undefeated in Mountain West play when it travels to play at Air Force Saturday at 5 p.m. at Falcon Stadium on the CBS Sports Network.

Here’s our Bronco Breakdown, with everything you need to know prior to kick off. This blog will be updated before, during and after the game with news, notes, scoring updates and more:

Taylen Green: The freshman quarterback will be making his first career road start on Saturday. He played nearly three full quarters in the season-opening loss at Oregon State, but the game was largely out of reach for much of that time. Starting in an important conference game on the road with a big crowd and pressure from the start will be a new thing for Greene, and how he performs will be a big factor in Boise State’s chances. Green had a bad interception deep in Boise State territory against Fresno State, and has completed just 60.7 percent of his passes in three games. He’ll need to avoid bad turnovers against the Falcons. Green rushed for just 22 yards against Fresno State after surpassing 100 yards in both the San Diego State and Oregon State games. Look for him to get more involved with his legs as the Falcons have to pick their poison on defense with Green, George Holani and Ashton Jeanty all proving to be threats in the running game. It’s a big test for Green – the hardest of his Boise State career to this point – and

Ezekiel Noa: Boise State’s sixth-year linebacker is having the best season of his career, and he’ll need another big game against the rushing attack of Air Force. Noa is third on the Broncos with 27 tackles, is second with 5.0 tackles-for-loss and leads the team with both 3.5 sacks and three forced fumbles. He’s also tied for the team lead with an interception. Last time out against Fresno State he became the first Boise State player since Donte Deayon in 2014 to have a sack, interception, forced fumble and at least five tackles in the same game. Noa has 24 tackles in four previous games against Air Force and had 10 tackles against them in 2019 prior to leaving early with a season-ending injury. Noa and fellow linebacker DJ Schramm will have several one-on-one tackling opportunities with Air Force ball carriers, and making the tackle will be huge. Missed tackles or being out of position typically proves to be catastrophic against Air Force, so Noa will need to have his best game of the season to help the Broncos come away with a road win.

-The Broncos have a 6-4 all-time record against Air Force.

-The Broncos are 152-20 in conference regular-season place since 2000. The .884 winning percentage is the best in the country during that span.

-The Broncos have outscored teams 55-3 in the second half of the past two games.

-Boise State has scored at least one point in 317 consecutive games, which ranks eighth all-time.

-When George Holani rushes for 100 yards in his career, the Broncos are a perfect 10-0.

-Under coach Andy Avalos, the Broncos are 9-0 when rushing for at least 140 yards as a team.

-The Broncos lead the Mountain West and rank 19th in the country against the run, allowing just 101.8 yards per game on the ground. Boise State has held each of the first three conference opponents below 100 rushing yards for the first time since 2002.

-The Boise State defense has only allowed 72 first downs, the fewest in the country. Teams are converting just 28 percent of third down chances against the Broncos, which is the 8th-lowest total in the country.

This figures to be a low-scoring, quick-moving game with the rushing attacks of both Air Force and Boise State. The Broncos don’t have to win this game, but they could really use it. A win makes it almost impossible for Air Force to win the Division, and it likely would allow the Broncos a slip-up elsewhere in their four remaining league games and still qualify for the Mountain West title game. Boise State lost to Air Force last year, and the Falcons are four-point favorites in this one. Taylen Green is 2-0 as the starter, but this will be his biggest test yet in his first road start. I question how many points the Broncos can score in this one, but I have faith the defense will play well also. Boise State’s defense is playing at a super high level right now, and I’m riding with them in this one. I’ve got the exact same score as last year, but with the winning team different: Boise State 24, Air Force 17.

What does Ohio State's loss today …by ColterRey2 hours ago

Looking ahead to 2023 (too soon?)by BSUaddict5 hours ago

Don't look now BUTby BSUaddict5 hours ago
Fan Poll
What bowl game would be best for the Broncos?