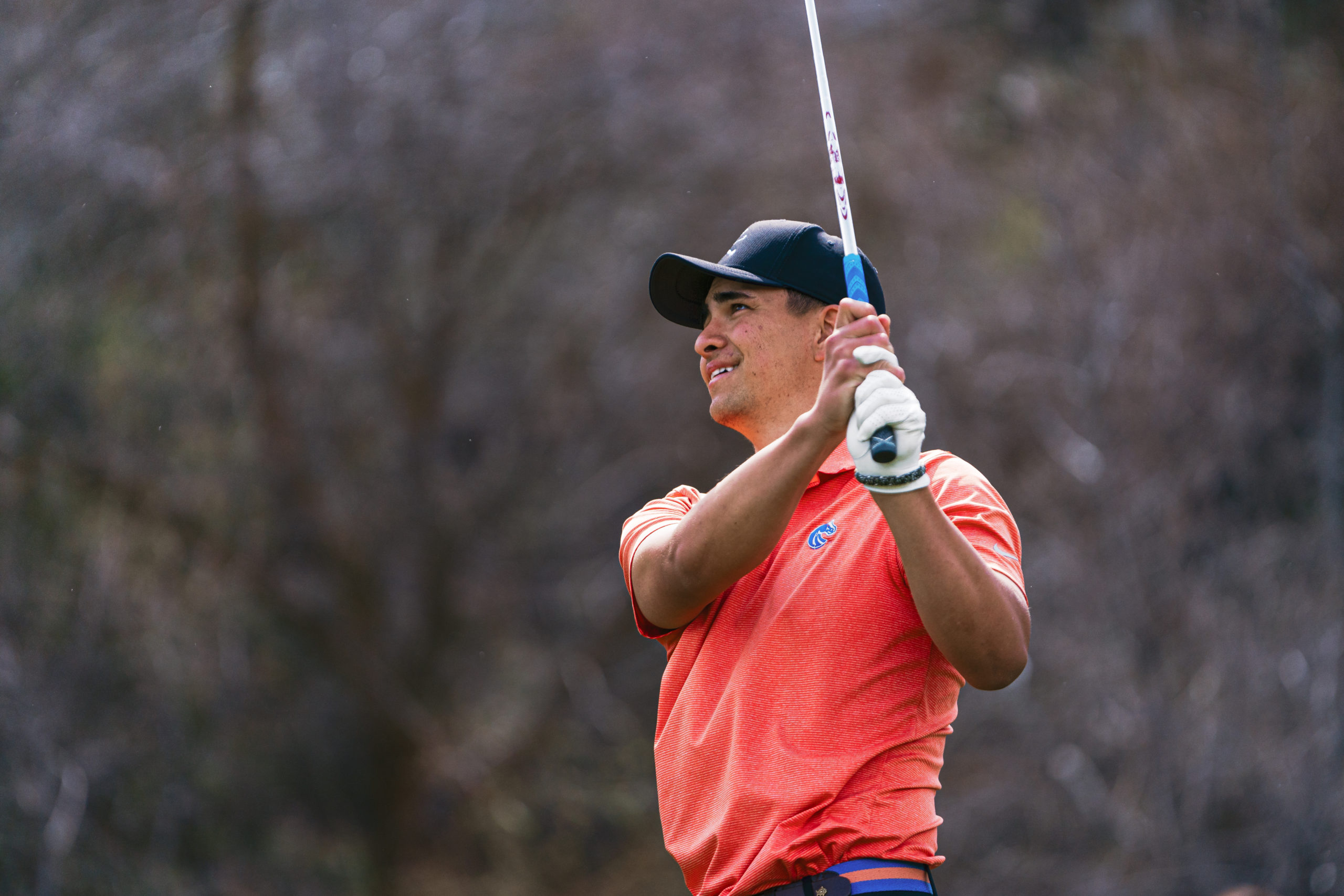 Whether mentally or physically, strength is an attribute that can contribute to success in a variety of different ways.

For Boise State fifth-year golfer Skyler Eubank, building strength has been a variable involved in every aspect of his life – and has helped Eubank to become a stellar golfer for the Broncos.

Before he could hold the third lowest scoring average ever at Boise State, Eubank grew up on a military base with his family in Japan and picked up golf clubs at a very young age.

“I started at two years-old with a plastic set of clubs,” Eubank said. “My brother is three and a half years older than me, and he got into golf, so it was pretty natural for me to follow his footsteps and get into the game.”

It would be just the first step of Eubank’s unique journey on the links.

The unique approach for Eubank started in the weight room. Military culture brought fitness and the gym directly into his backyard on the base, turning it into a lifestyle which would eventually be utilized as an asset to be a part of the new age of golf.

In Japan, the style of golf courses tends to be different from what the traditional person would picture in the United States. The Japanese style courses run much shorter and narrower, compared to the wide fairway approach with greater distance in North America.

A hurdle would soon come for Eubank’s golf journey, making the choice to take his talents on the course to Florida at the age of 14, attending IMG Academy in Bradenton in efforts to get his name out to colleges in hopes of playing Division I golf. Eubank’s brother had also moved to the United States.

“When I got to Florida, I felt like I needed to hit it much further,” Eubank said. “Golf courses are just much more different in Japan.”

Continuing to develop his craft and away around the new and longer golf courses, Eubank would grind in the gym and do everything possible to maintain his health while adapting to his new life in the United States. 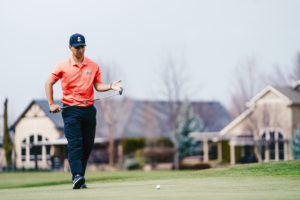 “Having an older brother who is insanely into fitness and a dad in the military that loves fitness,” Eubank continued. “We like being fit not just for golf but also for life in general, we try to live a healthy lifestyle.”

Though IMG Academy had the facilities for Eubank to succeed as a golfer, recruiting still lacked for the future All-Mountain West selection.

Eubank’s brother had committed to play golf at Texas A&M in College Station, Texas, and Eubank followed him. As they say, the third time is the charm.

The third region of golf courses proved to be the best for Eubank, who was gifted the opportunity to practice and train with his brother and other competitive opponents in the area, finding new ways to get around the course.

Boise State men’s golf coach Dan Potter saw Eubank play at a tournament in California, observing how much power he could develop in his swing with such a small stature compared to some of the others on the course.

There was instant interest from Potter.

“Golf has become a power game,” Potter said. “The technology is so good with drivers and the golf ball … If you can mash it off the tee and control it, it’s a big advantage over someone that can’t. Skyler certainly has a couple parts of his game that stand out among his peers.”

The interest persisted, and Eubank would attend Boise State. Eubank would once again pack his bags and move to a new place, this time with a true feeling of home with his mother and brother initially joining Eubank in the Treasure Valley while his father continued to work in Japan.

With golf being such a worldwide game, Eubank wasn’t the only Bronco to grow up in a foreign country. This year alone there are four other golfers on the Boise State roster listed from countries away from the United States.

“On our team we have two guys that are English, one Swedish and one Australian,” Eubank said. “It’s crazy to see how different people are and how what they assume is normal isn’t what I would assume is normal.”

Though it took time to mesh each one’s normality’s together away from the course, the team product on the course stayed consistent and only got better as Eubank’s years went on.

The journeyman would go on to finish third in top-25 finishes at Boise State and earned 2021 All-Mountain West honors as a Bronco before competing in the 2021 NCAA Regional in Albuquerque.

Eubank also became the fourth in career-rounds played at Boise State and could finish even higher by the end of his career this season. Away from the collegiate side in 2020-21 Eubank finished fifth at the Idaho State Amateur shooting 3-under.

“Everything has gotten so much bigger and better at Boise State,” Eubank continued. “I’m proud that I was a part of that growth for the golf team and I’m very happy with my decision to come here. Having Coach Potter here helped me not only learn about golf but also life as a person.”

Throughout his time on campus Eubank would continue to keep his family close, as his brother Kavan joined the coaching staff for two seasons during Skyler’s junior and senior years. Kavan is now an assistant coach at the University of Denver.

“Having him as my swing coach was very convenient,” Eubank said. “I definitely made a jump in my game last year having him here.”

As for what the future holds for the golfer, Eubank will finish up his final season as a Bronco in the near future and turn his sights to the professional stage, with a couple tasks along the way.

“My initial plan is to stay in Boise and get some financial support for myself,” Eubank laughed. “I do want to pursue professional golf, but I just need to get a job first.”

Eubank continued to say that if things don’t work out in Boise for the long term, he has an option to pursue living near his brother Kavan in Colorado. Kavan has access to courses where Skyler can train and continue to chase his dreams of playing professionally.

Eubank continues to be persistent in building strength both with his muscles and brain on and off the course as he carries on with the journey of life.

“He’s always gone out of his way to help other guys that have come here feel more comfortable and at home in Boise,” Potter said. “When you consider all of those factors, he was just a home run guy for us.”

Eubank and the Broncos will compete Friday through Sunday starting April 29 at the Olympic Course located in Bremerton, Wash. for the Mountain West Championships at Gold Mountain Golf Club.

Year of ‘growing pains’ ends for Broncos with loss to San Diego State in first round of Mountain West Tournament
March 6, 2022