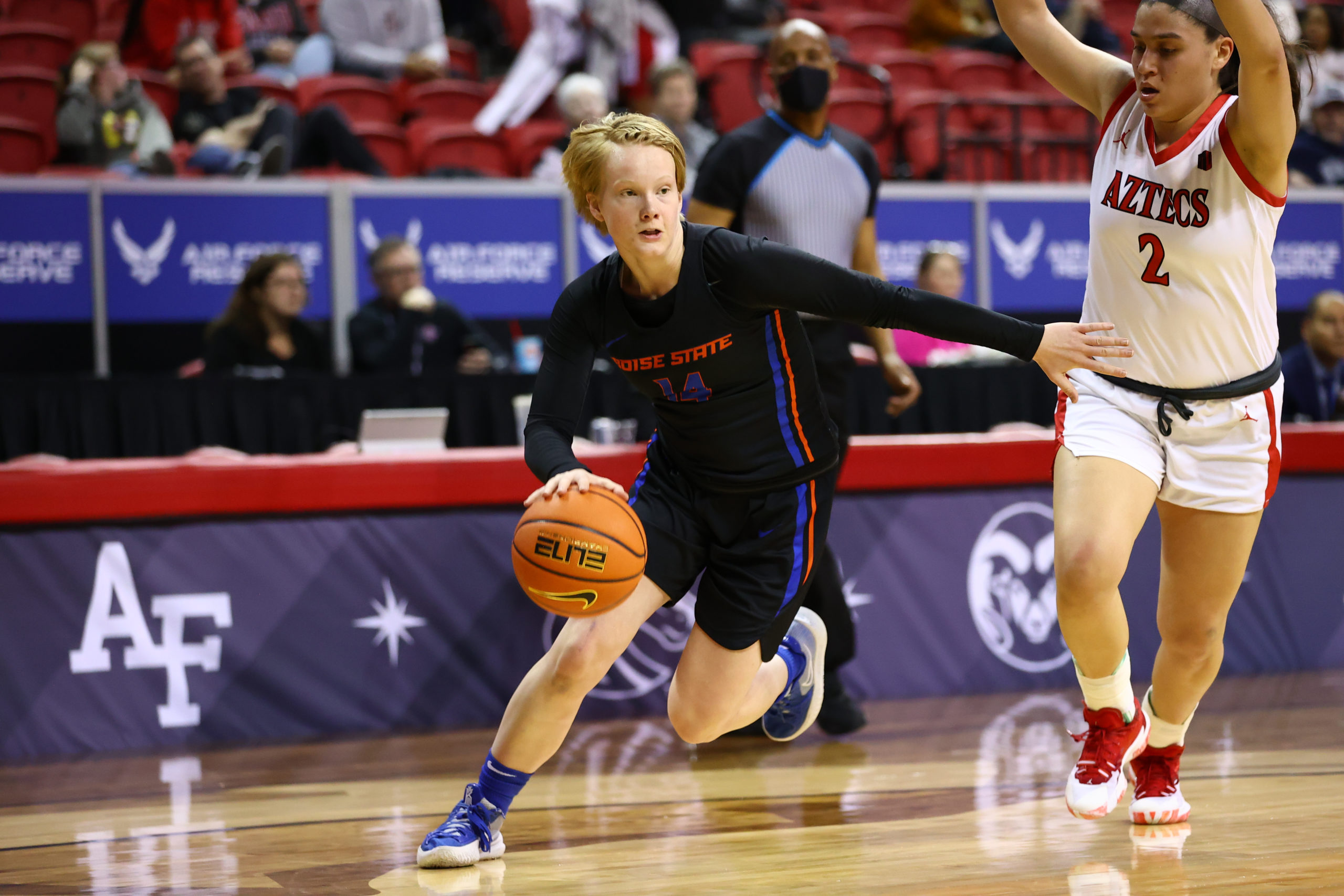 Boise State's Anna Ostlie drives to the basket during the first round of the Mountain West Tournament on Sunday evening in Las Vegas. (Photo by NCAA Photos/Mountain West)
By Collin MitchellMarch 6, 2022

There’s no secret the Boise State women’s basketball team knows how to win in Las Vegas. After all, the Broncos have won four of the past five Mountain West Conference Tournaments.

But coming in as the No. 10 seed the Broncos faced an uphill battle in hopes of continuing the magic this season.

After hanging around for most of the game, the Broncos ran out of chips and dropped their final game of the year, 65-56, to San Diego State.

“We have a lot of work to do in the spring and summer,” Boise State head coach Gordy Presnell said.

“Certainly that’s something to be proud of and a legacy left by former players – but there’s just one player left from those teams, Rachel (Bowers),” Presnell said. “It’s time for a new culture. We know the path, and we feel like we have some terrific pieces. We’re adding some really great players.

“We hope to be here, well not here (after a first round loss), but hopefully sitting in front of you on a different day next year.”

The Aztecs were led by Asia Avinger, who had 18 points – including seven in the first quarter that sparked a 12-0 SDSU run during a 6:26 Bronco scoring drought. Four different players scored in double figures for the Aztecs – and the Broncos couldn’t keep up.

The story was similar most of the game. The Aztecs bent, but didn’t break.

Boise State was gifted a chance to break loose and run away with a lead during a 6:35 Aztec scoring drought to end the first half, however the Broncos could only dial up four points within the span to cut their deficit within two points.

At the end of the third quarter Mary Kay Naro missed an open layup too strong off the glass that could have tied the game, leading to an Aztec buzzer-beater giving San Diego State a 42-38 lead.

After pulling within just two points on an Abby Muse fastbreak layup with 7:06 left in the final quarter, SDSU dialed up a run after a timeout sprawling the Aztec lead out to 54-47 with under four minutes to play.

With  losses in their last 11 games to close the season, most teams wouldn’t have a wide assortment of hope going into next season. Boise State is an exclusion to this.

“I’m really excited about next year’s team,” Muse said. “This was a growth year for us, so I think now we kind of have our feet under us.”

The young Bronco core, led by 15 points on 5-10 shooting from Anna Ostile, brought hope to what next year could look like. Elodie Lalotte contributed with her ninth double-double of the season to complement Naro’s 11 points.

Boise State has 11 players on the roster that are freshman or sophomores. Three of them scored in double figures tonight and combined for 36 of the Broncos 56 total points.

“This year was definitely a year of growing pains and learning,” Muse said. “It showed a lot of our character. We stayed together as a team, we didn’t turn on each other and we didn’t quit even though our season was not great … It points to our determination and the fact that we’re willing to learn and grow and continue the legacy that was started years ago with Coach P.”