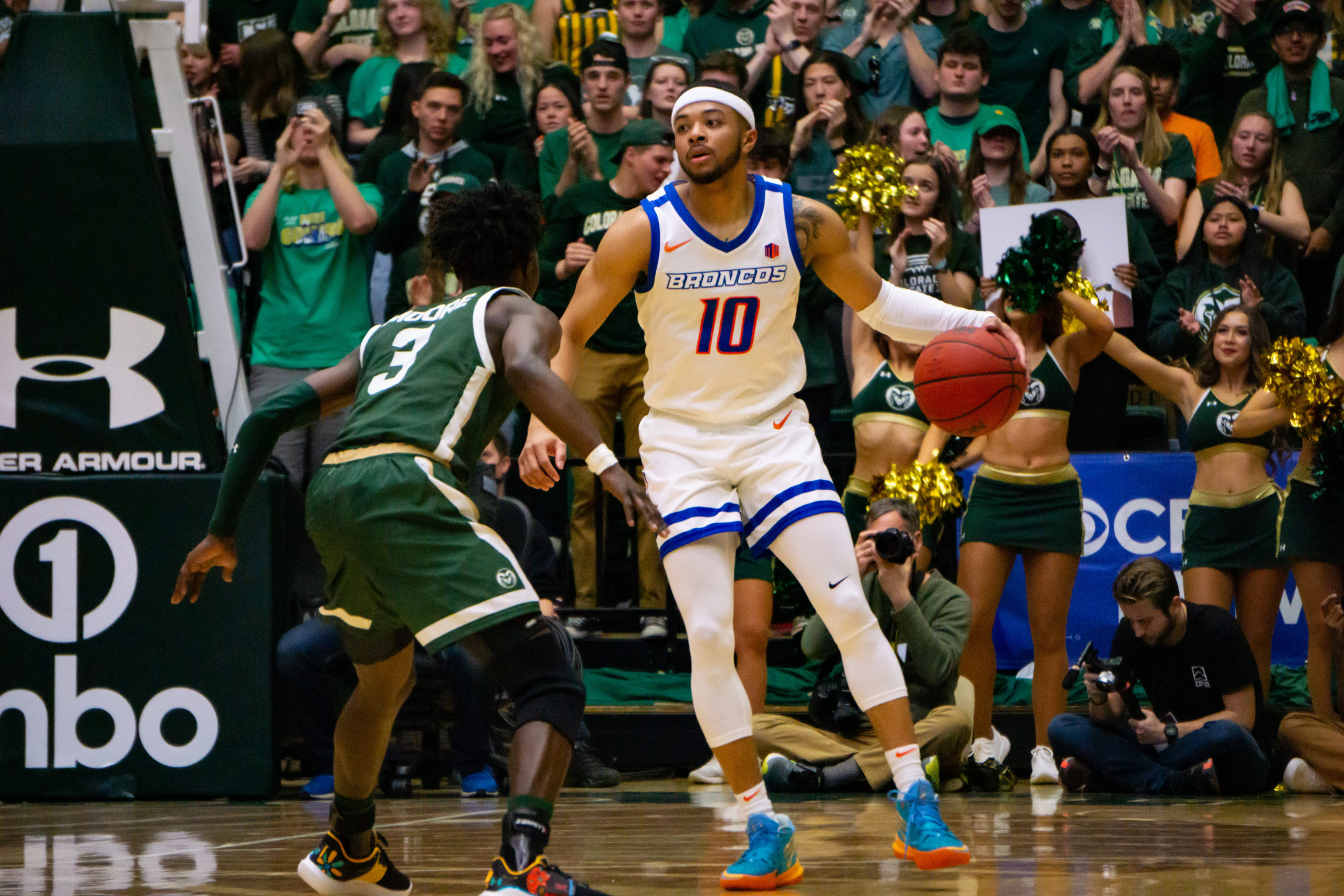 FORT COLLINS, Colo. – Boise State had already locked up the regular season Mountain West title and the No. 1 seed at next week’s conference tournament in Las Vegas.

But the Broncos still wanted this one. Badly.

Tyson Degenhart and Marcus Shaver Jr. missed go-ahead 3-pointers in the final minute and Boise State came up just short despite a valiant effort in a 71-68 road loss at Colorado State on Saturday night.

The Broncos (24-7, 15-3 MW) could have helped their seed for the NCAA Tournament with another Quad 1 win. But that was the only thing the Broncos were playing for with the regular season title all wrapped up.

Still, on Senior Night for Colorado State and with a sellout crowd – and the Rams fighting for the No. 2 seed in the conference tournament – the Broncos went toe-to-toe with the home team in an electric atmosphere from start to finish.

“Tough loss, tough loss,” senior Abu Kigab said. “But give credit to Colorado State. They played a hell of a game. … It stings a little bit, but you just have to flush it. We’re still the regular season champs and we’re going to go into the tournament with more hunger in our stomach from the loss, so I take this as a blessing in disguise. It gives us more fuel to the fire.”

Boise State trailed by as many as 11 points in the second half but rallied to take the lead on a putback from Kigab with 1:28 left.

But Colorado State’s James Moors grabbed an offensive rebound of his own and scored with 56 seconds left for his only bucket of the game to put the Rams back up in front 69-68.

A crazy final minute saw Degenhart miss an open 3-pointer that would have put the Broncos up, a turnover on Colorado State and Shaver Jr. driving to the hoop and losing the ball on what appeared to be a foul.

Colorado State’s Kendle Moore missed a one-and-one free throw attempt with 18 seconds left, but the Rams grabbed the offensive rebound. Moore then made two free throws with 13 seconds left to make it 71-68.

The Broncos put the ball in Shaver’s hands for the final shot – he’s made four game-tying or winning 3s in the final minute this season – but his 3 from the top of the key missed just before the buzzer and the fans stormed the court to celebrate a sweep of the league champs.

“I’ll tell you what, I couldn’t be more proud of them,” Boise State coach Leon Rice said. “Not many teams would have came in and fought like that. We just fought and fought and fought. That’s a hard deal. If one or two of those shots go down at the end, we win. It’s a one possession game right there and we had a couple decent looks that I thought were going. I thought Tyson’s was in for sure.

“But that’s basketball. We faced an amazing environment against a really good team on Senior Night with lots of emotion and the atmosphere was pretty hostile. And we had the ball and drove and there’s not a call at the end that we’ll look at and see what happened there, but who knows. These guys battled their tails off and that’s all I can say. I’m really proud of them.”

Kigab had 15 points to lead the Broncos, while Shaver Jr. 13 points and Max Rice had 11. The Broncos lost despite shooting 52.9 percent from the field.

Roddy had 23 points for Colorado State, while Moore had 19 and Isaiah Stevens added 12. The Rams will be the No. 2 seed in the conference tournament, which starts with the opening round games on Wednesday.

Boise State will play Thursday at 1 p.m. MT against the winner of Thursday’s game between New Mexico and Nevada.