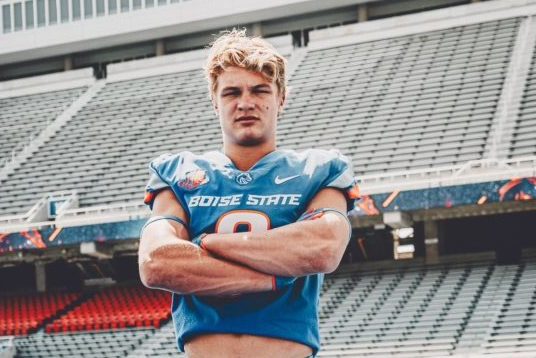 Bronco Nation News is catching up with Boise State football commits ahead of the Dec. 15 early signing period. Next up in our subscriber-only series is linebacker Jake Ripp of Los Gatos High School in Los Gatos, Calfiornia.

Linebacker Jake Ripp of Los Gatos (Calif.) High School took an unofficial visit to Boise over the summer at the same time as linebacker Gavin Hambrick of Apple Valley, Calif.

The two were waiting for Boise State to offer scholarships, and were under the impression only one of them might get an offer. It made for a somewhat awkward few days.

“Coaches told us there were only two spots for linebackers before we went, so it would have been surprising for both of us to get offered at the same time,” Ripp told Bronco Nation News. “The odds weren’t in our favor.”

As it turns out, both showed enough to get offered. The two went through drills with coaches and afterwards were offered scholarships separately during private meetings with coach Andy Avalos. The only issue? They weren’t sure how to mention they got offered to the other person, in case they didn’t get an offer.

“We were both nervous and stressed but I think it brought us closer together and we plan on being roommates next year,” Ripp said. “We both weren’t expecting to get offers at the time. I think the coaches had said if they like what they see we’ll probably offer in the next few days, so it was a shock when coach Avalos told my mom and I we want you on this team and we’re going to offer you. It was super surprising and pretty emotional because I knew I wanted to go there from the start.

Even crazier? Both Ripp and Hambrick randomly committed to Boise State on the same day a few days later.

“I said ‘I just committed,” Ripp said. “And he said, ‘I did too.’ … I’m super excited. It’s been stressful, the recruiting process has been long and kind of stressful at times, but I’m super pumped to get to sign and know where I’m going.”