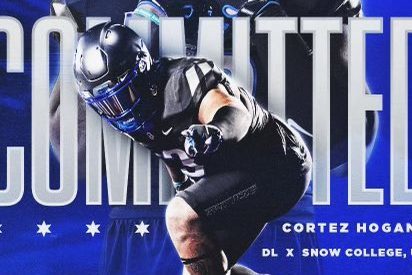 Bronco Nation News is catching up with Boise State football commits ahead of the Dec. 15 early signing period. Next up in our subscriber-only series is defensive lineman Cortez Hogans, a transfer from Snow College in Utah.

He recently got his chance, but said no thanks. He’s coming to Boise instead.

The Snow College transfer, who committed to Boise State about a month ago, will honor his pledge and sign with the Broncos on Wednesday despite late interest and an offer from the Nebraska Cornhuskers.

“I appreciated the offer but I want to stick with Boise,” Hogans told Bronco Nation News. “I’m not chasing a logo or chasing you just because you’re Big Ten. I’m from the Midwest and of course it was a dream to play in the Big Ten, but I just felt like Boise was the best spot for me to take off and make a name for myself and my career. I just felt a genuine vibe there and (Boise) felt like home.”

The 6-foot-4, 270-pound Hogans started his career at Northern Illinois before transferring down to Snow College. But now he’s set to sign with the Broncos and Wednesday and return to the Division I level for the final two years of his career.

“I’m ready to go,” Hogans said. “Since the day I committed I’ve ben ready to pack my bags and hit the road. I’m happy about it, my family is very excited. I’m ready to sign these papers and get to Boise.”