Video: Four-star commit Jeanty hopes to be ‘next great running back’ at Boise State 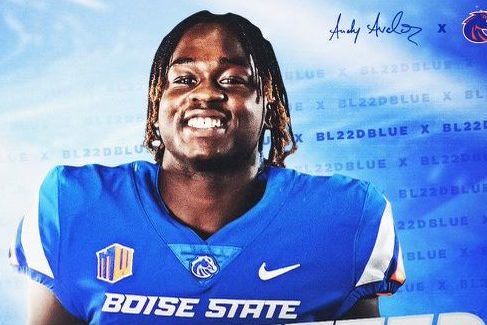 Bronco Nation News is catching up with Boise State football commits ahead of the Dec. 15 early signing period. Next up in our subscriber-only series is four-star running back Ashton Jeanty of Lone Star High School in Frisco, Texas.

Ashton Jeanty knows all about the history of strong running backs at Boise State.

He hopes to soon add his name to the list.

Jeanty, a four-star prospect from Lone Star High School in Frisco Texas, plans to sign with Boise State on Wednesday. And he’s got big goals.

“I’m hoping to be the next great running back to come through Boise,” Jeanty told Bronco Nation News on Sunday.

Jeanty said he didn’t know a ton about Boise State’s running back tradition when the Broncos started recruiting him. But he quickly saw how the likes of Jay Ajayi, Jeremy McNichols and Alexander Mattison all were able to leave school early and get picked in the NFL Draft – and he’d love to one day keep the trend going.

“I did my research and it was amazing to see that and I’m really happy that I could have a chance to go be the next great running back there,” Jeanty said. “We have a great history and I’m going to come in and hopefully (add to that) with more bowl games and winning seasons. Its going to be a great three to four years.”

Jeanty had more than 2,600 total yards and 41 touchdowns as a senior, causing some Boise State fans to worry that other schools would come try to flip his commitment prior to signing day. He confirmed California and TCU both made late runs, but said he plans to sign with the Broncos.

“There were a few schools coming after me before but I told them I’m 100 percent Boise and I can’t wait to actually make it official on Wednesday,” Jeanty said.

Asked if Boise State fans had anything to worry about ahead of Wednesday, he said, “Nothing at all, man.”

More good news for Boise State: Jeanty plans to graduate in December and arrive in Boise in early January to enroll for the spring semester and get a jump start on his college career. He’ll be part of the winter conditioning program and able to participate in spring practices.

“It feels so good,” Jeanty said. “It feels like a dream come true for sure. … It’s in my mind every day that I’m actually going to go there and play and I can’t wait. I’ve been counting down the days. It’s finally coming soon.”

One less BSU scholarship football …by Joseph Whitaker21 hours ago