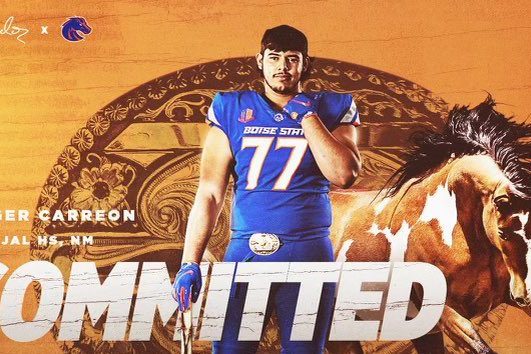 Bronco Nation News is catching up with Boise State football commits ahead of the Dec. 15 early signing period. Next up in our subscriber-only series is offensive line commit Roger Carreon of Jal High School in Jal, New Mexico.

Roger Carreon had planned to visit Boise State and then go check out Oregon State the next weekend before making a decision.

When he got to Boise, he saw no need to leave.

Carreon, a three-star offensive lineman from Jal, New Mexico, committed to Boise State back in June while on his visit.

“We walked out on the field and I got the goosebumps and chills and stuff and I looked at my mom and said ‘I’m home’,” Carreon told Bronco Nation News. “I wrapped my arm around coach Avalos and asked him if we could have a meeting and we went up in his office and I told him I’m home. From there it got really emotional, the coaches were yelling and hollering and jumping around. My brother and my mom were in tears. It was an amazing moment.

Carreon said he called the Oregon Sate offensive line coach the next day to cancel his visit. He had seen everything he needed to see in Boise.

“I wanted to be up front and honest,” Carreon said.

Six months later, Carreon will make it official. He’ll sign with the Broncos on Dec. 15 as part of the 2022 recruiting class.

“It’s been an exciting process,” Carreon said. “It’s feeling more realistic. Before it was just a dream, but now it’s a reality. The closer it gets, the more anxious I get and the more ready I am to get to Boise State.”

PREVIOUS VIDEOS IN THIS SERIES

Boise State QB's number 15 and 16 …by Joseph Whitaker1 day ago
Fan Poll
What bowl game would be best for the Broncos?