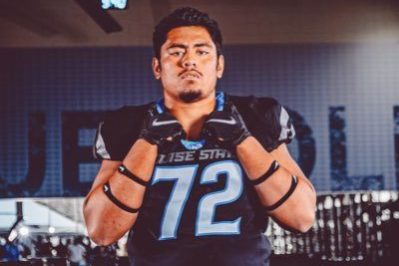 Bronco Nation News is catching up with Boise State football commits ahead of the Dec. 15 early signing period. Next up in our subscriber-only series is defensive line commit JJ Talo of Kearns High School in Salt Lake City.

Talo, who committed to the Broncos over nearby Utah State back in June, said he can’t wait to make it official on Dec. 15 and get to Boise a few short weeks later.

“Nothing but excitement,” Talo said. “I’m excited to get it rolling and get started. It’s going to be a blessing and a blast to be part of this team and to be able to play on The Blue. I can’t wait to get started. I’m excited.”

Talo said he went to Boise State’s road games at both Utah State and BYU, as well as the home game against Air Force.

“That atmosphere was crazy,” Talo said of seeing the Broncos play the Falcons on The Blue. “When they ran out of the tunnel, oh my gosh. That feeling was indescribable – the best feeling anyone can ask for.”

Talo said his recruitment is 100 percent over and he is “locked and loaded on BSU for sure.”

OTHER VIDEOS IN THIS SERIES

One less BSU scholarship football …by Joseph Whitaker12 hours ago