Video: Corner Dionte Thornton has been committed longer than anybody else in Boise State’s 2022 recruiting class 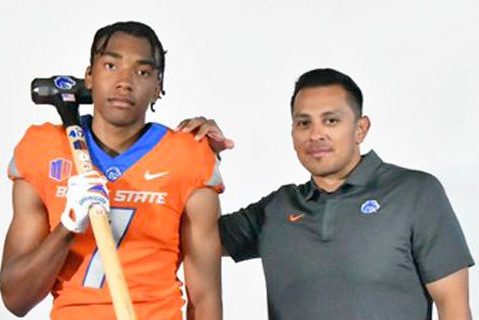 Bronco Nation News is catching up with Boise State football commits ahead of the Dec. 15 early signing period. Next up in our subscriber-only series is cornerback Dionte Thornton of Lawndale, California.

Cornerback Dionte Thornton has waited longer than anybody in the 2022 class to sign with Boise State on Wednesday.

The three-star prospect from Lawndale, California, has been committed since June 8 – longer than any current commit to the Broncos.

Thornton was originally the second player to commit to Boise State in the 2022 class but quarterback Kaitin Houser flipped his commitment to Michigan State, making Thornton the the longest committed player ahead of Wednesday’s signing day.

“I’ve been dreaming about this since I started playing football,” Thornton said. “I can’t wait to sign. I’m very excited. I can’t wait to play on the blue field and make a name for myself.”

Thornton committed during an unofficial visit to the Broncos.

“I committed because they made my dad and I feel like family,”  Thornton said. “My mom wasn’t there at the time, but they made me feel like a priority and I loved everything about it when I was out there.”

Thornton said he returned for his official visit for the Air Force game, which is when it hit him that he’ll soon be playing for the Broncos.

“It felt surreal,” Thornton said. “There were a lot of fans there. It was packed. I got there early and saw all the fans out there (tailgating) early. I was very excited.”

Subscriber video series: Three-star DB commit Franklyn Johnson Jr. plans to ‘give it all I got’ at Boise State
December 16, 2022