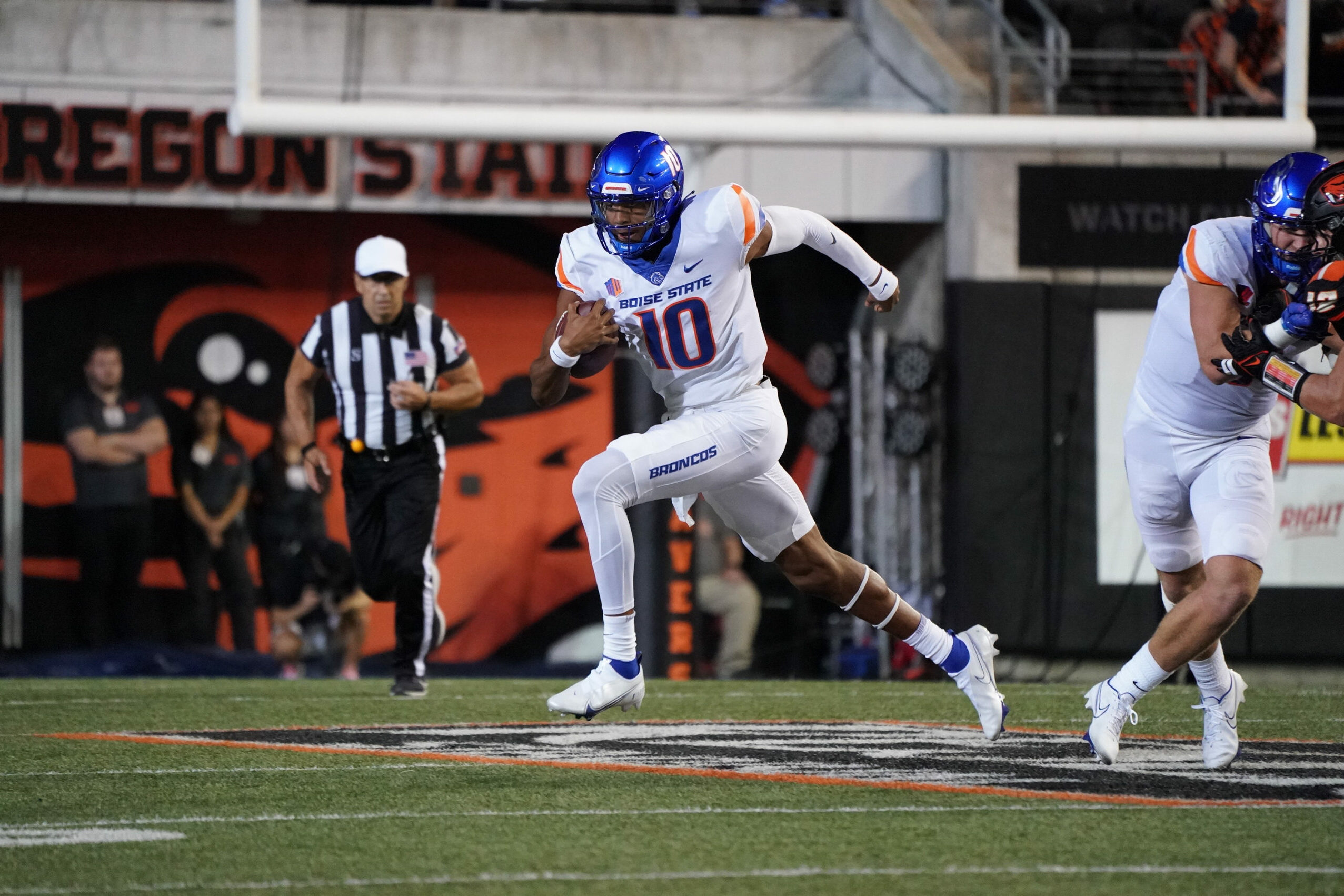 Boise State quarterback Taylen Green runs with the ball in the second quarter of a 34-17 loss to Oregon State on Sept. 3, 2022, at Reser Stadium. (Photo by Boise State Athletics)
By B.J. RainsSeptember 27, 2022

The Boise State football team officially moved on from the Hank Bachmeier era on Tuesday when coach Andy Avalos, through a team spokesman, announced that Taylen Green would start at quarterback on Friday night against San Diego State.

Green was one of four quarterbacks participating in practice Tuesday. Bachmeier, as expected, was not one of them.

Bronco Nation News first reported Monday that Bachmeier had decided to transfer, opening the door for the redshirt freshman Green to take over as the starter.

Green went first in the drills observed by the media during a roughly 30-minute portion of practice open to the media, with former Oregon State transfer Sam Vidlak working in behind him alongside redshirt freshman Colt Fulton and true freshman Maddux Madsen.

“I wish Hank the best,” defensive coordinator Spencer Danielson said Tuesday. “I hope everything goes well for him in the future. He’s a great kid. But I am very excited for those guys in that room. … They’ll be ready to go on Friday night. When guys leave and guys come in, it’s really the next man up mentality.”

Bachmeier started 29 games for the Broncos, including all four this season. He was benched early in the second quarter of a season-opening loss at Oregon State, and Green showed some flashes after replacing him.

“We have all the confidence in the world in Taylen,” offensive lineman Will Farrer said. “I believe in all the guys in that room, whoever is back there (at quarterback), but I’m excited to see Taylen. He’s a fellow Texan like me, so I’m excited to see him let it loose.

“He’s obviously earned it. He’s worked his tail off, so to see him out there and get his first start, it’s going to be exciting.”

Both Farrar and safety Alex Teubner, the two players who Boise State made available to the media on Tuesday, declined to answer questions about Bachmeier and instead referred them to the coaching staff.

Said Teubner on Green making his first start Friday night, “I’m excited to see what he’s going to do with his opportunity.”

But Green was arguably attraction No. 2 during Tuesday’s practice. That’s because all eyes were on new offensive coordinator Dirk Koetter, who was hired to finish out the season after Tim Plough was fired by coach Andy Avalos over the weekend.

Koetter, Boise State’s head coach from 1998-2000, was the head coach of the Tampa Bay Buccaneers from 2016-2018 and also served as the offensive coordinator of the Buccaneers, Atlanta Falcons and Jacksonville Jaguars during a 14-year NFL coaching career from 2007-2020.

HIs son Davis is a senior wide receiver for the Broncos, and he’s been around the program as an offensive analyst since February.

“He obviously brings a whole lot of experience,” Farrar said. “He’s been coaching for 39-40 years at the highest level, so having him out there – he know’s what he’s talking about obviously. It’s great to have his presence and his energy out there at practice.

“He cares about this place. He was the head coach here and he knows what it takes to be a Bronco, so really it’s just following his lead and whatever he has for us, we’re going to execute.”

Farrar said the offense under Koetter will be “pretty similar, but a few minor tweaks” from what Plough ran the past year and a half.

When asked for a scouting report of the new Koetter-run offense, Danielson joked, “they’ve completely transitioned to the Air Force triple option” before adding, “it’s been cool to see him put his tweaks on it. You guys will see what it looks like on Friday night.”

Danielson, the only coach made available to the media on Tuesday, said he appreciated his friendship with Plough.

“I have respect for coach Plough, he’s a friend of mine and I wish him the best in the future and I truly mean that,” Danielson said. “But I’m excited for coach Koetter stepping in. He’s going to bring a ton to the offense and the quarterback room and I’m excited to see where it goes.”

Danielson admitted the previous 72 hours, combined with an ugly 27-10 loss to UTEP, could serve as a distraction to the Broncos if they aren’t focused on moving forward. That’s been the goal this week – focusing only on San Diego State.

“Obviously there’s been a situation with our offensive coordinator and our quarterback and it’s catching a lot of attention,” Danielson said. “But if Im a player, I’m not saying it’s easy to do, but as an elite competitor you can control your prep and how you train and control how you get ready for this game. At the end of the day that’s all that should matter for you.

“Our guys are ready for this game. Our guys are fired up. We’ve got a great group of guys in our locker room. They are very frustrated with how last week’s game went. Very frustrated. … But they are excited to get back out there Friday on The Blue in front of our fans and play San Diego State.”

Looking ahead to 2023 (too soon?)by BSUaddict3 mins ago

Pretty amazingby BSUaddict1 hour ago
Fan Poll
What bowl game would be best for the Broncos?