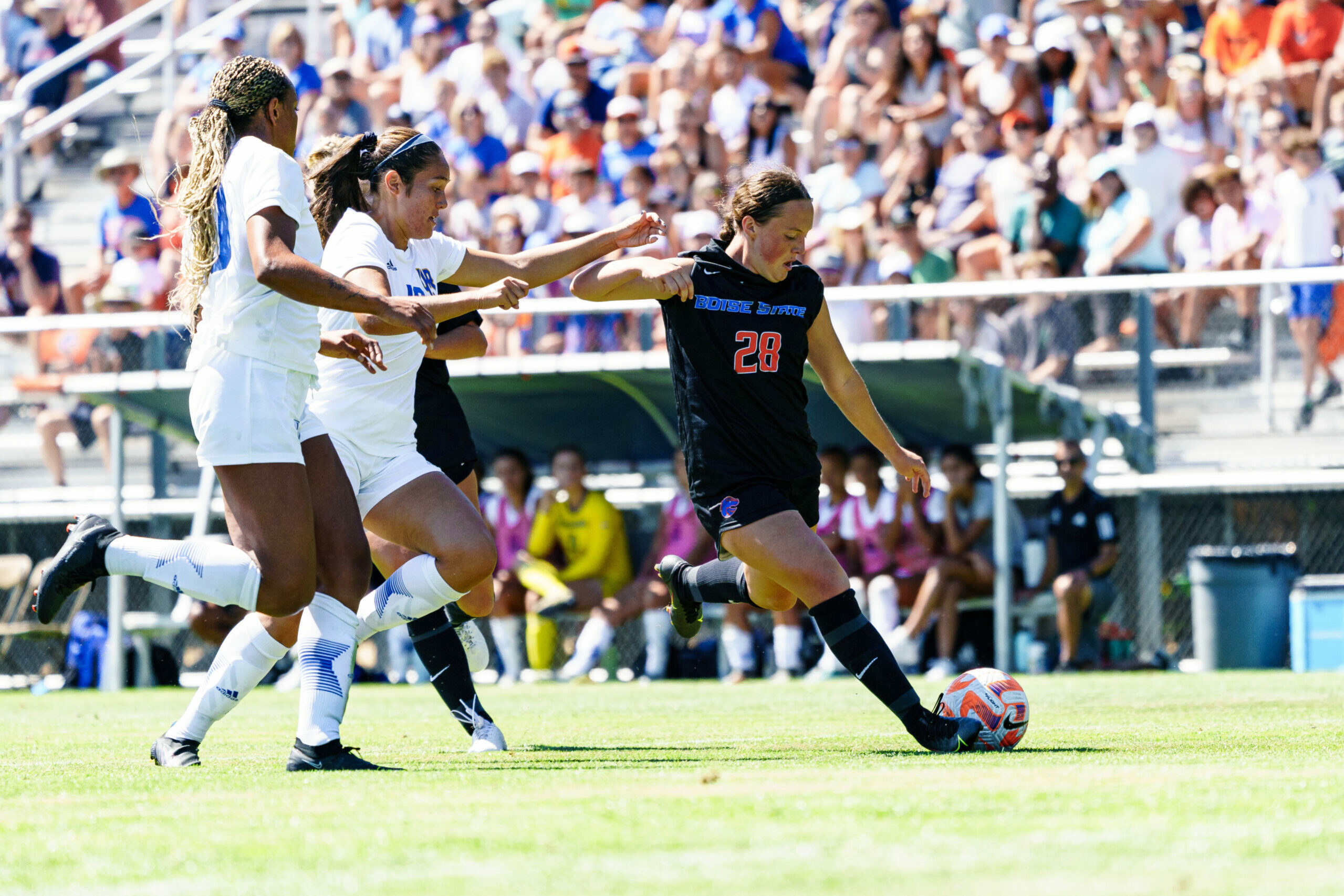 How crazy and unlikely is the scoring run freshman Hayden Wilsey is on right now for the Boise State women’s soccer team?

Wilsey made a contest with Morgan Stone a few weeks ago to try and see her teammate score 10 goals this season – thinking there was no way she’d even play enough herself to try and compete against her.

The competition has since changed to who will get to 10 goals first. And Wilsey is somehow already almost there.

The freshman from Timberline High School has come out of nowhere to score seven goals in the past seven games to already surpass Boise State’s leading goal total from all of last season of five.

She didn’t expect to even play this early in her Boise State career. Now she’s the leading goal scorer in the Mountain West and tied for 10th in the nation.

“It’s been so crazy,” Wilsey told Bronco Nation News. “I always tell my family and friends that this doesn’t seem real. It’s not real life. I didn’t think I’d be this far along. Coming into the season, my freshman year I thought I’d play a little bit and try to contribute as much as I can, but now that I’m actually playing and doing amazing things, it’s insane really.”

Wilsey didn’t play much the first two games of the season and didn’t score in either one. But things changed against UC Riverside on August 28th, when she played 53 minutes and scored not once, but twice, for the first two goals of her Boise State career.

She added a goal at Oregon, two goals at CSU Bakersfield and just scored two more goals on Sunday to help the Broncos to a 4-0 win over Eastern Washington.

Her three multi-goal matches already ties for fourth-most in a career in Boise State history, and she’s the first player with seven goals in a seven-game span since record-setter Raimee Sherle did it as a junior in 2018.

She’s off to one of the best starts in Boise State history, and again, nobody – literally nobody – could have seen this coming.

“Oh, no,” coach Jim Thomas said with a laugh when asked if Wilsey’s scoring spurt was to be expected. “We didn’t have (any expectations) for Hayden. And maybe that’s allowed her to play more free. She loves to compete and loves to score goals and she’s learning a lot of ways to do that.”

Thomas said the unexpected start for Wilsey reminds him of Sherle, another local product who burst onto the scene and eventually became the all-time leading scorer at Boise State with 61 career goals. Sherle tied for the national lead in goals in 2018 with 20 and was the first All-American in program history. But Sherle only had seven goals her entire freshman season – and Wilsey already has seven before even starting Mountain West play.

“It’s been a blessing but a little bit of a flashback,” Thomas said. “The parallels to how Raimee got off to her career and the styles of player they are, there’s so many similarities. So it’s a little bit nostalgic for me. She’s kind of been what we’ve been lacking to be honest since Raimee left. Someone that can score regularly has been hard for us to find.

“If she can keep up with a goal every other game, that’s consistent and the rest of the team will support her from that point onward. It’s really having the kid you know every other game she’s going to get one, and so far she’s off to a better start than that. She really balances out a lot of the things we do.”

Wilsey, who was named the Mountain West Offensive Player/Freshman of the Week on Monday for the second straight week, has shown no signs of slowing down. She had her most shots on goal this season Sunday (five), which resulted in the two goals.

Her minutes have also gone up. She’s played at least 44 minutes in six of the past seven games.

“I’ve been able to find my footing with more minutes and can show who I am as a player on the field in game competition,” Wilsey said. “It’s gotten easier for me after I got more minutes under me. It took a little bit of time for me to get used to everything.”

Wilsey was born in Twin Falls but moved to Boise in the third grade. She played multiple sports growing up, “but soccer was the one that just stuck. I could have done gymnastics but that one I didn’t like following all the rules. Soccer gives me a little bit more freedom to do my own thing.”

She had a connection to Boise State through her club team while playing at Timberline High and always knew she wanted to be a Bronco. Other schools tried to call and recruit her, but her mind was pretty much made up from the start.

“I’ve lived here my whole life and I knew Boise State was home for me,” Wilsey said.

And that’s what has made all this even cooler.

The big question now? Can she keep this up.

“The answer is I don’t know,” Thomas said with a laugh. “How does her body hold up emotionally, psychologically and physically as the pressure starts to mount and we’re playing conference games for a championship? We haven’t seen how she’s going to react to that and how other teams are going to react to her and how she’ll have to evolve to stay effective.

“But I know she’s off to a great start…and if we can keep her free, she’s going to continue to be a problem for people.”

As for the competition with Stone? Wilsey currently leads 7-3.

“That is so weird to even think about,” Wilsey said. “Honestly, as a freshman too? I’m just like this doesn’t feel right. This seems out of place a little bit. … But I’m confident in myself so I’m just going to keep playing how I’ve been playing and hopefully it works out for me.”

Wilsey will look to keep her hot streak going when the Broncos open Mountain West play Thursday at home against UNLV at 4 p.m. at the Boas Soccer Complex.