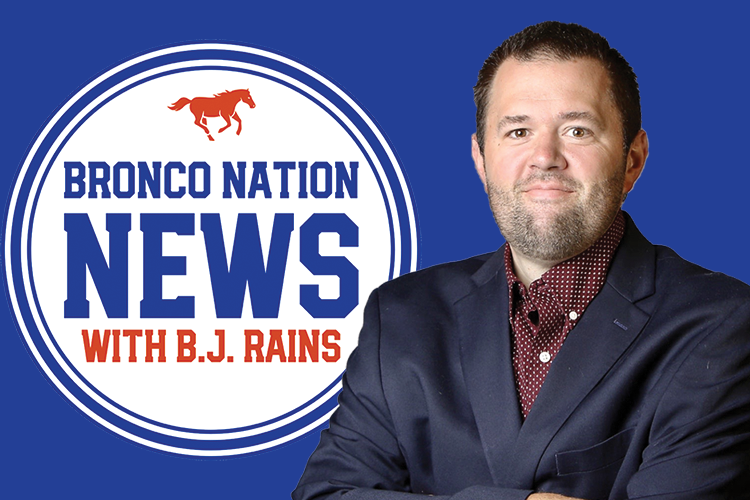 Greetings and welcome to Bronco Nation News! This is a surreal day for me to officially be launching my own website and social media company covering Boise State Athletics!

I am so excited to get this thing rolling and I have big plans. Some I can share, some I can’t – but stay tuned.

Bronco Nation News will hopefully become your new source for the best coverage of Boise State Athletics. I plan to work tirelessly to make sure that happens, and soon.

For those of you unfamiliar with me, I was the Boise State beat writer for the Idaho Press the past nine seasons. I’m now branching off on my own in hopes of building a company and website that will be the go-to spot for any Boise State fan. What’s the rumor on coaching news? What’s the analysis after a big game? When fans think this – I hope they think of one spot to go find the answer: Bronco Nation News.

The site will have full coverage of the football and men’s basketball teams, plus occasional coverage of other sports at Boise State. The volleyball team is heading to the NCAA Tournament after winning the Mountain West Tournament last week as the No. 6 seed, so we’ll definitely be tracking that.

But we’ll focus primarily on the two big sports, football and basketball. We’ll cover recruiting in addition to the day-to-day news, feature stories, analysis and video of press conference interviews. We’ll also have updated rosters, stats, schedules and depth charts. Anything you need on the Broncos – we’ll have it at BroncoNationNews.com.

I plan to do game coverage a little differently than I did at the Idaho Press, because those that follow this site probably watched the game and don’t need to read a 1,000 word recap. My goal will be to provide more analysis and looks at certain plays or key moments or important players that led to the win or loss instead of just providing a straight recap.

One feature I’m excited about? Message boards. We’ve installed easy to use message boards that can be accessed on the FORUMS tab above. I hope to make this an online community of Boise State fans to gather and discuss the latest happenings with the Broncos. Feel free to start a post with an opinion or question and hopefully others will reply. I’ll be very active on the boards as well to provide insight and commentary.

When I decided to launch a website like this, I knew I couldn’t start from scratch. Trying to build up a social media following would have been time consuming and pricy. And trying to pitch advertisers on a new site that hadn’t launched yet and had no following on social media would have been near impossible to sell ads. So that’s how the name Bronco Nation News came about.

There was already a fan blog and social media channels under the name, which had done quite well. The Facebook Group has 62,000 followers, the Twitter account has 9,500 and the Instagram page has 8,000. To make this thing work from the start, I needed to have that kind of following. So I reached out to the owner Drew Vachal and was able to come to an agreement to purchase the channels from him.

I brainstormed possible names but kept coming back to what made the most sense – just keeping it Bronco Nation News. So I came up with a new brand, logo and website and will be starting a completely new company and website from scratch – but with same the name and social media following of Bronco Nation News.

With that social media following comes the thing I’m most excited about with this site and what I think has the most potential – live streaming shows. I’ll have pregame and postgame shows for every Boise State men’s basketball and football game – starting with tonight’s game against Saint Louis – and fans will be able to post comments or questions that can be featured on screen and discussed on the broadcast. They will air live on the BNN Facebook, Twitter and Youtube channels, as well as on the BroncoNationNews.com website.

But that’s just the beginning. I plan to start a network of live shows throughout the week, similar to a radio station. ‘The Matt Bauscher Show’ will air live every Wednesday morning and feature comments and analysis from former Boise State basketball player Matt Bausher. ‘Kickin’ It With Rausa’ will air every Monday night at 7 p.m. and feature insights and analysis from former Boise State kicker Tyler Rausa.

I have plans and goals for other shows, some which are finalized and some which are not, so stay tuned for more details on that. My big hope is that by early January I am able to do a daily show each morning talking Boise State sports on the social media channels. We’ll have guests, discussions, analysis and more on the Broncos on a daily basis.

You put it all together and it’s something that’s never been done before in this market – and something that has the potential to be a game-changer for fans in terms of credible and reliable coverage of Boise State Athletics for fans.

With all this said, I quit my full-time and basically emptied out my savings to make this happen. My amazing wife Karen has been working extra shifts as a nurse at the hospital to help with startup costs, but I will need a consistent revenue stream to make this happen. I still plan to travel to all road football games and most road basketball games to provide coverage and insight that can’t be done by watching a game on TV. But that means an estimated $15,000 in travel costs in 2022 – which I now have to fund myself.

That’s where you come in. I hope you’ll consider a subscription to Bronco Nation News.

We’re running a launch special right now for $1 per week for full access to the site if you pay the $52 up front for the full year. That’s right, for a one-time charge of $52 you will get an entire year of coverage on the Broncos and insight and analysis that won’t be found anywhere else. All the stories, videos, breaking news – for just $52. Other cool membership benefits can be found on the subscription page.

Use the coupon code BNNFIRST100 to get the discounted rate. And if you are one of the first 100 to sign up today, you will be entered in a drawing to win a $100 gift card to The Blue and Orange Store to get some new Boise State gear. The link to sign up is here.

If you aren’t sure about that kind of commitment and want to see the site for a while first, we also have a monthly rate of $6.99.

I hope folks will support me and give this site a shot, because I’ve got big goals and big plans for it moving forward.

A few folks I need to thank before I go. First to RoePaint.com, who stepped up as our title sponsor before ever seeing the design of the website or knowing much about it. Their initial commitment and support made the decision to do this site much easier. I also must thank Lithia Ford of Boise, The Blue and Orange Store and Transportation Compliance Service for stepping up as major sponsors.

Other sponsors that I am grateful for include Bauscher Real Estate, Ridley’s Family Markets, Boise Dentistry Co., United Commercial Insurance and Crave Delivery. You will hear more about these great sponsors as we move along with the site, but I hope you will please support them and thank them for supporting Bronco Nation News.

I will be eternally grateful to the Idaho Press and everyone there for a great nine years. Matt Davison, the publisher, put up with me and a lot of my crazy requests over the years. I wouldn’t be in this position without him, so I want to make sure I say thank you directly to Matt.

Others at the Idaho Press that deserve thanks include Vicki Holbrook, who hired me nine years ago. I worked with three other managing editors, Scott McIntosh, Holly Beach and Teddy Feinberg, and I appreciate their support and help. I also want to thank Greg Lee, who has been the sports editor the past few years and really helped me grow. I remain close friends with Greg, and I am happy for that.

I’m sad to no longer be working with John Wustrow, Brian Myrick, Jake King and the rest of the reporters and photographers at the Idaho Press. It’s a hard-working team that takes pride in their work, and I know that will continue moving forward.

Rhonda McMurtrie is maybe the one I’m going to miss the most! She’s the Finance Director at the Idaho Press and for years had to put up with my late time cards and expense reports. Maybe more importantly she was the scorekeeper for our Idaho Press softball team, which won the championship a few years back! I will miss a lot about the Idaho Press, but nothing will top not being able to pop in Rhonda’s office and chat.

The Idaho Press is an awesome newspaper with a ton of great people. I will forever be a fan, reader and subscriber of the Idaho Press and I hope you will be to.

But it’s time for a new chapter in my life and I couldn’t be more excited. It’s launch day for Bronco Nation News. It’s going to be a fun ride – and I can’t wait to do it together!