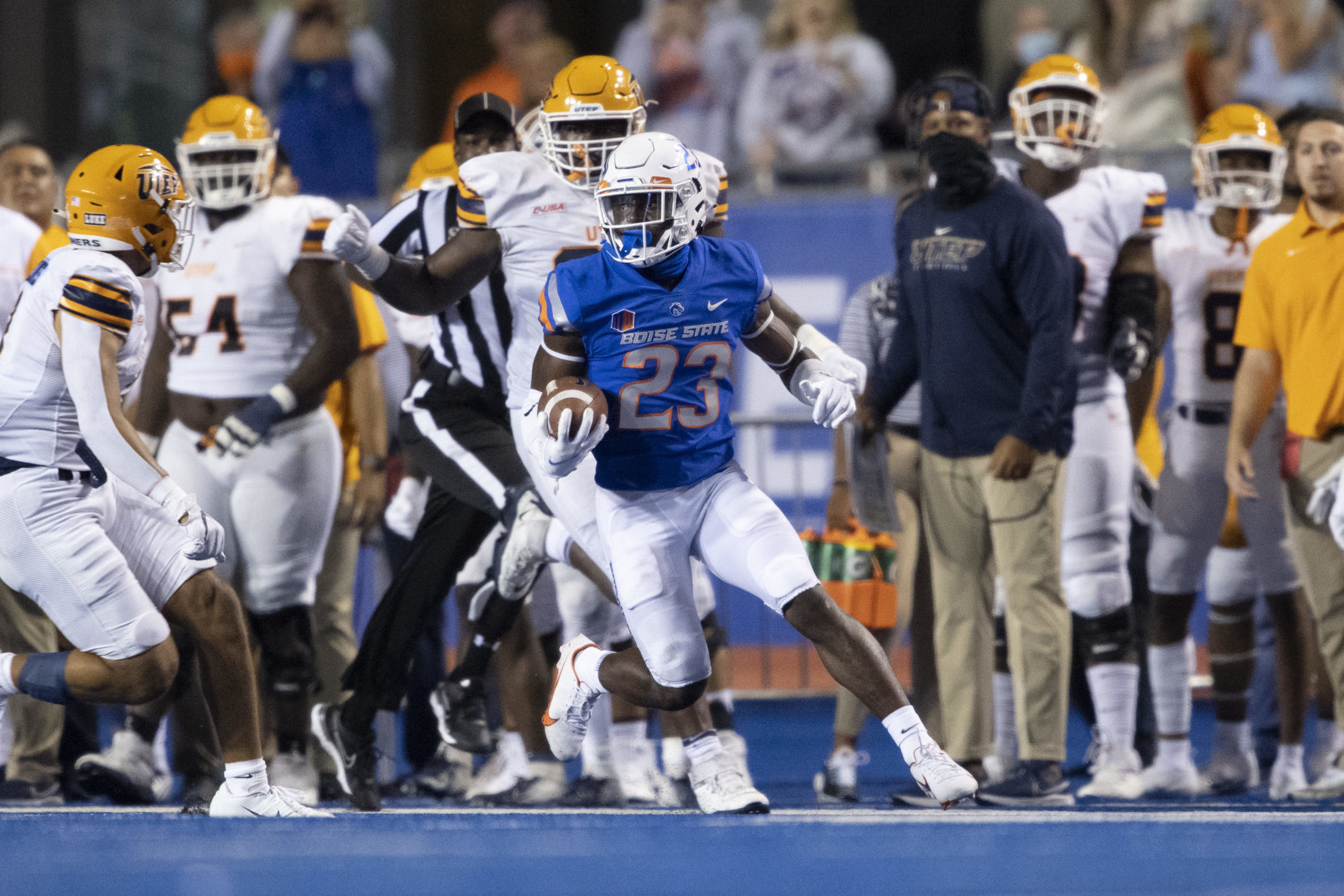 Boise State's Seyi Oladipo returns an interception against UTEP during a game in 2021 at Albertsons Stadium. (Photo from Boise State
By B.J. RainsAugust 1, 2022

The Boise State football team opens fall camp on Wednesday. Here’s a look at five key position battles to keep an eye on as practices get going…

Note: This article is only available to paid subscribers of Bronco Nation News, so thanks for your support.

Backup quarterback: Many believe Taylen Green will be Boise State’s quarterback of the future, and the 6-foot-6, 220-pounder is oozing with talent. But he might not even be No. 2 on the depth chart this year. Oregon State transfer Sam Vidlak has earned strong reviews since he arrived in January and according to coach Andy Avalos “has as good a grasp of this offense as any guy who’s played in it for the first year.” But Green has skills the Broncos likely will want to get on the field in some capacity – he’s the second-fastest player on the team – even if his overall game or knowledge of the offense is not as good as Vidlak. It’s not crazy to see a scenario where Vidlak is No. 2, but Green gets a package of plays including short-yardage and goal line stuff. But Green has the higher ceiling and potential than Vidlak, and we’ll lean slightly to him winning the backup spot behind Hank Bachmeier. Prediction: Green.

Cornerback: Maybe one of the most competitive and intriguing position battles during fall camp figures to be at corner, where four returning players all made at least four starts last season. Caleb Biggers started eight of the final nine games and would seem to have a leg up for one of the two spots in his second season after transferring from Bowling Green. Markel Reed might have a slight edge at the other spot but is coming off a torn ACL. Both Tyric LeBeauf and Kaonohi Kaniho saw time last season and will push for starting spots, as could Utah State transfer Jared Reed – who sat out all of last season with an injury. Prediction: Caleb Biggers and Markel Reed.

Wide receiver: Stefan Cobbs will be Boise State’s No. 1 receiver this fall, but there’s plenty of uncertainty and competition behind him. With Khalil Shakir and Octavius Evans gone from last year’s roster, the Broncos have plenty of playing time available – and plenty of candidates fighting for it. Davis Koetter had just 14 catches for 160 yards and a touchdown last year but is the most likely to snag a starting spot. Koetter, the son of former Boise State coach Dirk Koetter, is in his second season with the Broncos following a transfer from Portland State. Austin Bolt has received a lot of offseason love as well and might finally be ready to make an impact on The Blue. It’s been a frustrating two-plus years for Bolt, who has no career catches and has bounced around from tight end to defensive end to wide receiver. But he’s the fastest player on the team and appears ready to contribute in year three. Others that figure to be in the mix for playing time at wide receiver include Latrell Caples, Billy Bowens and Shea Whiting, while redshirt freshmen Eric McAlister has potential as well. Prediction: Cobbs, Koetter and Bolt.

Offensive line: Three of the five spots appear to be set along the offensive line, but the battle at both guard spots will be worth paying attention to. Left tackle John Ojukwu returns as the most experienced player on Boise State’s roster, and Washington State transfer Cade Beresford likely will open the season as the starter at right tackle. Kekaniokoa Holomalia-Gonzalez is slated to return at center after missing all of last season due to an unspecified injury. His absence last year caused a series of dominos which led to the group largely underperforming, so having him back will be huge. But the two guard spots both appear to be open, with Ben Dooley, Garrett Curran and Will Farrer all in the mix. Dooley is probably a lock to earn one of the two spots after starting all 12 games last year, including eight at right guard. Curran started eight games at left guard, while the former Texas Tech transfer Farrar started three games at center and one game at right guard. Asked about the competition at guard and one of the three not starting this fall, Avalos said, “That’s what depth at O-Line should look like, right? That’s what it has to be.” Prediction: Curran at left guard, Dooley at right guard.

Punter: The departure of five-year contributor Joel Velazquez has opened up the competition at punter for returner Gavin Wale and newcomer James Ferguson-Reynolds. Avalos said neither was in the lead and, “it’s going to be a fun competition to see.” The favorite appears to be the freshman Ferguson-Reynolds, who was one of the top punters in the 2022 class after signing with the Broncos out of Australia. Said Avalos: “He’s really precise with the football. It’s like a baseball pitcher in terms of him being able to hit the inside of the plate or the outside of the plate.” The Australian rugby-style punting has become more popular in college football in recent years, and the Broncos probably don’t go to the time and effort to recruit someone from Australia if they don’t think he has a good chance of earning a starting spot early in his career. Wale enters his fourth year in the program and has seven career punts, all in one game in 2020 against BYU when Velazquez was out. Avalos alluded not to discount Wale’s chances, saying, “Will has done an unbelievable job too and has been extremely productive in terms of his hang time and his distance and placement as well.” Prediction: Ferguson-Reynolds.

Other battles to watch: The Broncos moved Tyreque Jones to nickel, which opens up a spot at safety for either Seyi Oladipo and Rodney Robinson. Oladipo is probably the favorite given what he did as a true freshman last year, but both will battle for the spot during camp. … Brandon Hawkins appeared to be the likely starter at the weak side linebacker spot in place of the departed Riley Whimpey, but Avalos announced shortly before camp that edge rusher Isaiah Bagnah was being moved to the ‘will’ linebacker spot to compete with Hawkins. That instantly becomes one of the more interesting battles during camp. … The backup running back battle behind starter George Holani will be worth keeping an eye on as well. Returner Tyler Crowe will battle highly-touted incoming freshman Ashton Jeanty for the No. 2 spot on the depth chart.

Battle at cornerback heating up for Broncos: ‘They feel it now. They know we’re close’
August 18, 2022

After ‘long, rough four years’, the wait might finally be worth it for wide receiver Billy Bowens
August 16, 2022

Broncos hoping to see less of record-setting kicker Jonah Dalmas this fall, and he’s ‘perfectly OK with that’
August 11, 2022

Stefan Cobbs not focused on trying to replace Khalil Shakir: ‘The big motivation for me is I’m trying to get another ring’
August 10, 2022

Safety JL Skinner focused on putting hype aside: ‘lists and all that don’t matter until you prove it’
August 8, 2022

Battle at cornerback heating up f …by B.J. Rains38 seconds ago

Battle at cornerback heating up f …by B.J. Rains38 seconds ago

Boise State is 1st team to haveby Railroader45 seconds ago
Fan Poll
What bowl game would be best for the Broncos?