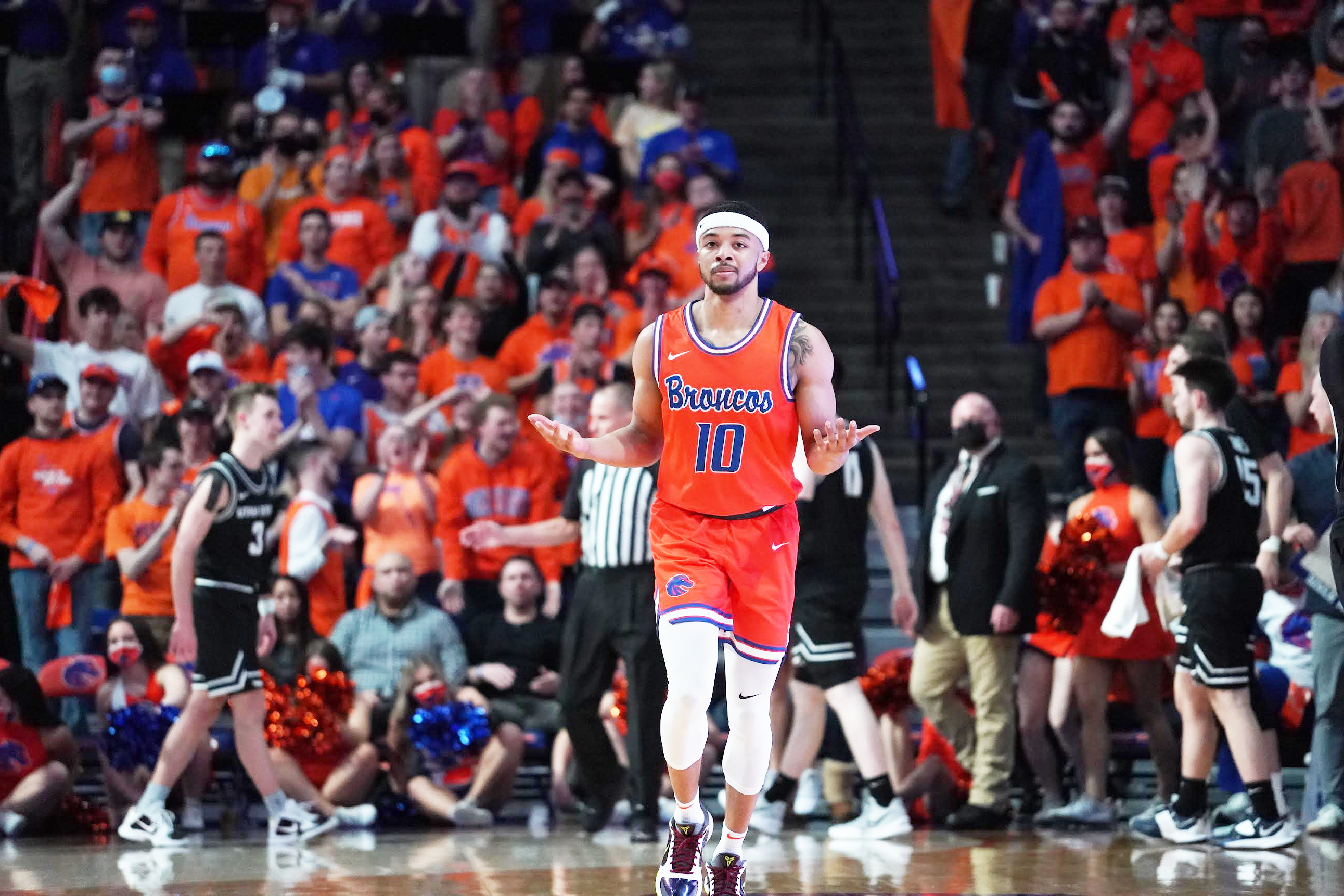 Boise State coach Leon Rice has coached in some of the best venues in the country including Rupp Arena at Kentucky, the Breslin Center at Michigan State, the McKale Center at Arizona and The Kennel at Gonzaga.

When ExtraMile Arena in Boise is filled to capacity for a big game, it rivals any of them.

And that’s why Rice is asking – almost begging – fans to scoop up tickets and attend Tuesday night’s showdown with Mountain West power San Diego State. A win would push the Broncos closer to securing the program’s first at-large bid to the NCAA Tournament since 2015.

The Broncos (21-6, 12-2 MW) have twice had announced crowds of greater than 10,000 fans this season, but Rice is hoping Boise State can surpass that for one of the biggest home games in the past few years. More fans means a better atmosphere – and the Broncos need it with a formidable San Diego State bunch (No. 23 at KenPom) awaiting.

“When this place is full and rocking, holy cow is it special. It gives you goosebumps,” Rice said Monday. “And that’s what we need and what these guys deserve. I plead to Bronco Nation. Come on out because our guys will battle and you’ll see two really good basketball teams.”

Boise State is offering two tickets for $22 ($11 per ticket) on BroncoSports.com using promo code TWOSDAY. It was also announced Monday that popcorn and nachos will be available for $2.

Full concession sales have returned (including alcohol) and seats in the student section are no longer being blocked off for social distancing. Boise State is offering free pizza and raffles for gift cards and prizes for students that show up.

“I hope everybody understands how much it means to our players and how much it helps us,” Rice said. “It gets us over the hump and gives us energy. That’s what we have to play against when we go there so let’s go Bronco Nation. Come out and see these guys and support us. You only have 80 more minutes left in the building.”

Fans that show up figure to see a heck of a game. The two teams met in San Diego about a month ago, with the Broncos pulling out a 42-37 game. San Diego State is currently ranked No. 1 in adjusted defensive efficiency at KenPom.com, while the Broncos are 11th.

“Oh my gosh, it was alarming how physical it was,” Rice said of the first meeting with the Aztecs. “That was a physical basketball game. I think we’ve established that both teams are really good defensively but when I watched it on tape it was really jaw-dropping of how both teams played in that game defensively. It was hand-to-hand combat. A shot would go up and two guys would be on the ground and one guy would be flying out of bounds and somebody would come out with the rebound. Both teams were like that. I expect nothing less.”

San Diego State (17-6, 9-3 MW) finds itself right on the NCAA Tournament bubble. ESPN’s Joe Lunardi has flopped the Aztecs in and out of the field the past few days and currently has them as the first team out of the tournament. That means the Aztecs have plenty to play for and surely will be fired up for a chance to get a ‘Quad 1’ win for its resume.

The Aztecs, who have won five games in a row, are coming off an impressive 61-44 victory at Fresno State last Saturday.

“Nobody would have predicted that,” Rice said. “That’s a pretty good basketball team to go beat them by 16 or 17. That tells you how good they are playing. They did the same thing to Utah State the week before. They are playing great basketball, no doubt about it. It looks like they are peaking at the right time.”

A win would be huge for Boise State for several reasons. In addition to strengthening its NCAA Tournament resume, a win would make the Broncos 2-0 against the Aztecs – which could end up being the tiebreaker that could give the Broncos the No. 1 seed at the conference tournament in March. If Boise State and Wyoming finished tied atop the standings, their records against the next highest-ranked team in the standings would be the tiebreaker, and that could be San Diego State.

With both teams badly needing a win, it figures to be a heck of a game Tuesday night in Boise. And that’s why Rice is hoping for a big crowd to back them.

Boise State is 1st team to haveby Bronco745437 mins ago