Out of the stable: Broncos break loose, score 97 points in win over Prairie View A&M 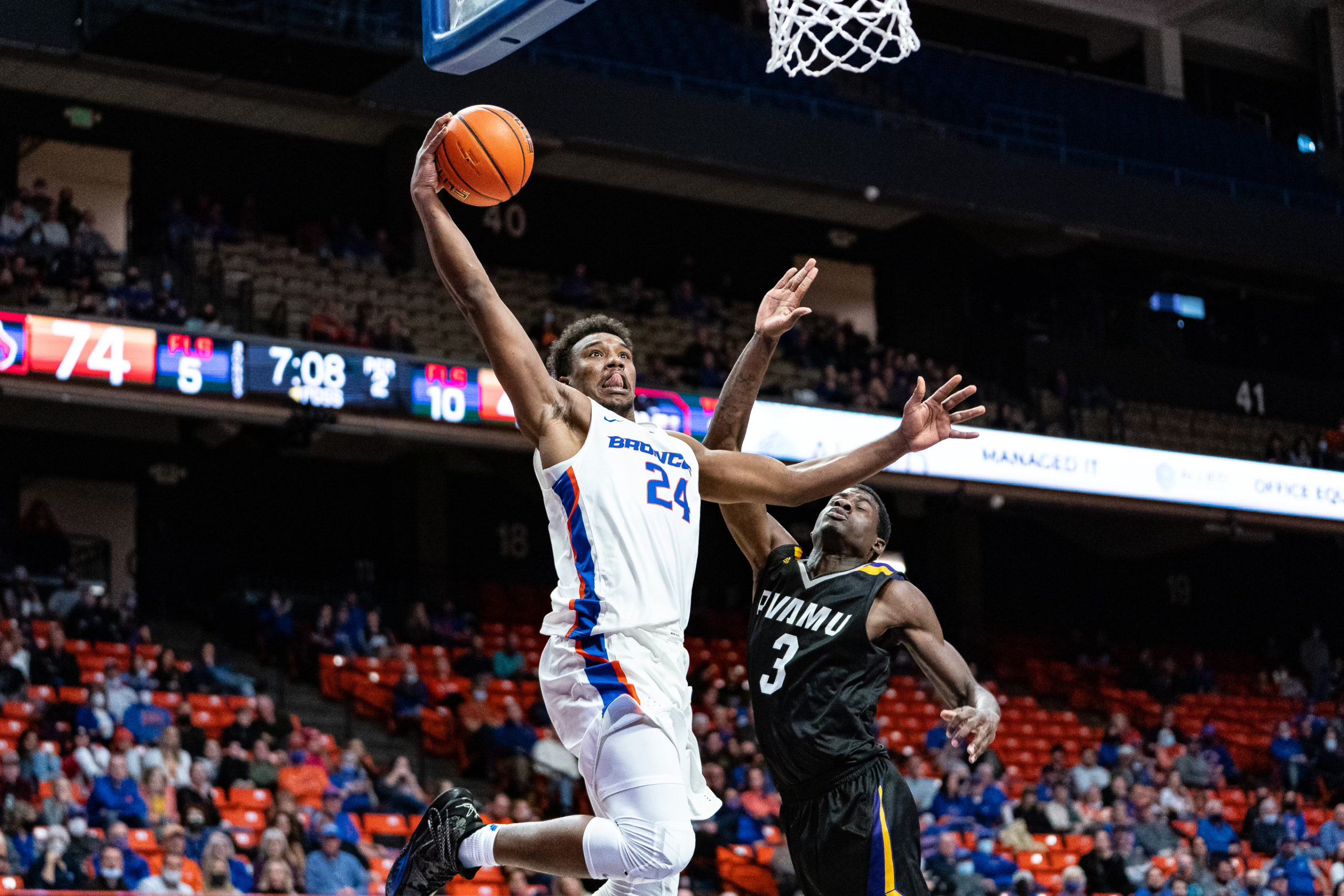 Boise State's Abu Kigab goes up for a slam dunk during the second half of Friday's 97-60 win against Prairie View A&M at ExtraMile Arena. Kigab finished with 32 points in the win. (Photo courtesy of Boise State Athletics)
By Collin MitchellDecember 10, 2021

Prairie View A&M traveled to Boise Friday for a date with the Broncos, continuing the Panthers’ tour of the country in what was the ninth of 12-straight road contests to start the season.

The result was the same as their previous eight: a lot of fouls, and a loss.

Abu Kigab led the Broncos with 32 points and 10 rebounds, emerging freshman Tyson Degenhart had 16 points and shot 4-5 from 3-point range and Marcus Shaver Jr. added 20 points in a 97-60 Boise State victory over the Panthers.

Coach Leon Rice used the same five starters for the fourth game in a row, consisting of Shaver Jr., Kigab, Emmanuel Akot, Degenhart and Mladen Armus. The group played well for a fourth straight game, and won for the third consecutive time.

“Knowing who you’re going to play with night in and night out makes it a lot easier,” Kigab said. “That obviously builds the chemistry, and you know where guys are going to be.”

The was tied at 21 when Boise State’s defense went to work. The Broncos held Prairie View scoreless for 4:32, and Boise State ended the half on a 15-2 run to lead 36-23 at the break.

Prairie View went just 2 of 16 from the 3-point line and shot 32.8 percent from the field overall. The Panthers scored 90 points in their last game, a loss at South Dakota State, but were held to just 60 by the Broncos.

“I think our defense wears you down a bit – they didn’t get clean looks all night,” Rice said. “When you can shut off somebody’s water from three that makes a big difference.”

The Broncos had plenty of opportunities to improve their percentage at the free-throw line. Boise State, which entered the game with the worst free throw percentage in the country at 55.2 percent, went to the line a staggering 52 times and made 33. The school record for free throw attempts is 55.

The 52 free throw attempts are the most in 12 years under Rice, and the most by any team in the country this season.

“I think it was maybe kind of what the doctor ordered,” Rice said. “Sometimes you just need a bunch of free throws under the lights to kind of get more comfortable and it seems like we broke through and started making them all at the end.”

A ferocious Kigab dunk at 7:06 took any roar the Panthers had left, sending it right into the mouths of the crowd at ExtraMile Arena as the Broncos extended the lead to 78-45.

“It’s the pass that sets up the dunk,” Kigab said. “If E-man (Akot) doesn’t make those bullet passes, I don’t even get the opportunity.”

Boise State (6-4) hosts the Santa Clara Broncos (7-3) Tuesday evening at ExtraMile Arena in a matchup that will air nationally on CBS Sports Network. Santa Clara will travel to Berkley to play California Saturday evening before heading to the Gem State.

Leonidas scored six points during a late third-quarter run to give the Broncos a 58-47 lead heading into the fourth quarter. She scored 20 points in the second half, including four free throws in the final 29 seconds to ice the game.

“She was terrific,” coach Gordy Presnell said in a release. “She hit big shots, made key free throws down the stretch, made great passes and played solid defense.”

The win was the second in a row for the Broncos, who play at Washington State Sunday at 1 p.m.

Answer to the question most Bronc …by king seo14 hours ago