No. 9 on the BNN most important players list for Boise State football in 2022: Safety Tyreque Jones 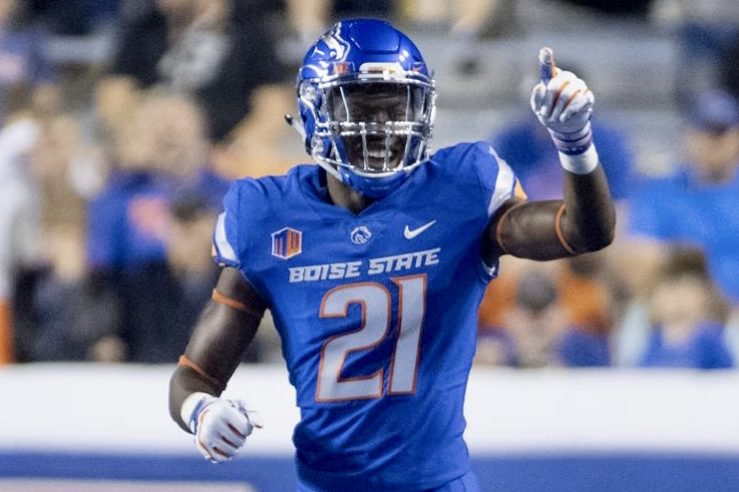 Boise State safety Tyreque Jones smiles to a teammate during a game at Albertsons Stadium in 2021. (Photo by Boise State Athletics)
By B.J. RainsJune 1, 2022

Bronco Nation News is counting down the 25 most important players to the Boise State football team in 2022. Next up in our series is No. 9, safety Tyreque Jones:

Don’t try talking to Tyreque Jones about the NFL or how coming back for the 2022 season could help his chances of getting drafted next year.

He’s worried about one thing – going out in style.

Jones, a 6-foot-2, 205-pound safety, could have pursued a professional career following the 2021 season. But with a bonus year of eligibility still available due to the COVID-19 pandemic, Jones elected to come back for one more season with the Broncos – and to try and win the program’s first Mountain West title since 2019.

“The league will be there,” Jones said this spring. “I have to handle my business and take care of what’s in front of me and right now the focus is on this team. I came back for a reason, and the team ultimately is my purpose.

“I’m not worried about the league or thinking about what round I’m going to get drafted in or any type of mock draft or draft talk. That has nothing to do with what I have to handle right now.”

Jones is one of the most experienced players on Boise State’s roster. The sixth-year senior signed with the Broncos way back in 2017 and redshirted that year. He’s played in 44 games the past four years since debuting in 2018 and has started 26 games – tied with Ezekiel Noa for second most amongst returning players behind only left tackle John Ojukwu.

He’s coming off the best year of his career in 2021 in which he finished fourth on the team with 53 tackles and had two interceptions, a team-high six pass break-ups, three tackles-for-loss and a forced fumble while starting all 12 games.

He easily could have taken his shot at the NFL last year, but instead returns alongside JL Skinner to form one of the top safety duos around.

“I’m not done here yet,” Jones explained. “I have a lot to leave as far as my legacy and my impact as far as the younger guys coming up.”

Jones has a chance to make a major impact on the Broncos. He’s the ‘quarterback’ of the defense and is responsible for setting the coverages and making sure those in front of him on defense know where to line up and what to do.

Having a veteran in that role is huge – and the Broncos figure to benefit from his five-plus years of experience.

“I’ve grown a lot,” Jones said. “Maturity, leadership, knowing the defense. I can help just about anybody that’s on the field. ….  (But) I want to improve as an overall player.”

Jones figures to play a huge role on Boise State’s defense, which is why he checks in at No. 9 on our list of the most important players to the Broncos in 2022.