No. 8 on the BNN most important players list for Boise State football in 2022: Center Kekaniokoa Holomalia-Gonzalez 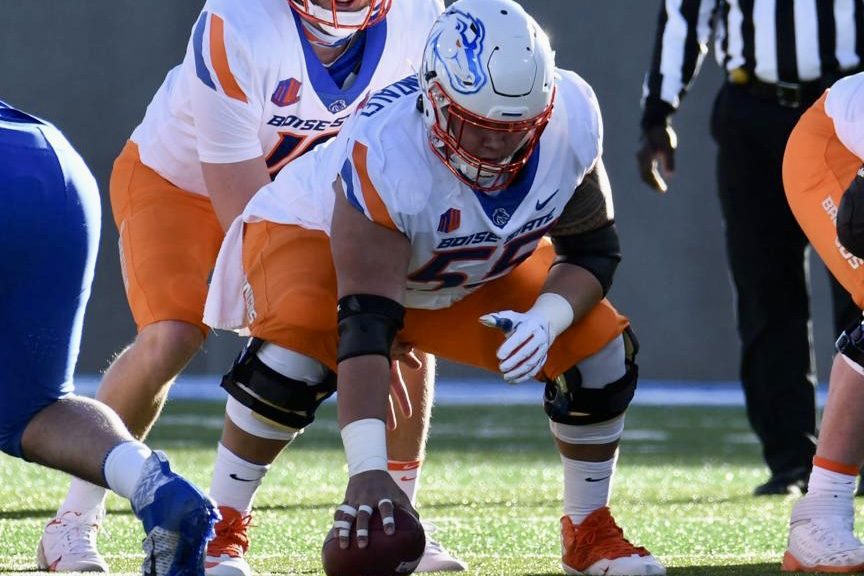 Bronco Nation News is counting down the 25 most important players to the Boise State football team in 2022. Next up in our series is No. 8, center Kekaniokoa Holomalia-Gonzalez:

It’s tough to pin the struggles of the Boise State offensive line in 2021 on one person, or in this case, one injury – but the absence of starting center Kekaniokoa Holomalia-Gonzalez appeared to be the root of the problems.

Holomalia-Gonzalez missed the entire 2021 season due to an undisclosed injury or medical condition and the Broncos struggled mightily to replace him. The dominoes that followed – four different starting combinations along the offensive line in the first five games – led to a poor year running the ball and ultimately Boise State’s lowest scoring output in more than a decade.

Three different players – Donte Harrington, Will Farrar and Jake Stetz – each started at least three games at center as the Broncos searched for a capable replacement. Harrington started the first four games but had several errant snaps, leading to Farrar taking over for game five against Nevada.

The unit finally improved later in the season once Stetz moved to center for the final four games, but it was mostly too little, too late for a team that finished a disappointing 7-5 on the year.

Holomalia-Gonzalez started six of seven games during the pandemic-shortened 2020 season and by all accounts is the best center on Boise State’s roster.

Why he missed 2021 remains a mystery – he wouldn’t provide details during a spring media session with reporters – but he participated in spring practices and confirmed he’s back to 100 percent.

“It wasn’t something I could just tape or brace up and play through,” Holomalia-Gonzalez told reporters in March. “I had to take a step back and take the recommendation of people that know what they’re talking about.I had to put my pride aside and listen.”

It’s unclear if it was an injury or medical condition that kept him out. He said he made decision shortly before the season opener against UCF to stop playing. He tried to get cleared during the season but was unable to – leaving him to watch as the offensive line struggled without him.

“It was a tough road,” Holomalia-Gonzalez said. “It’s not like me or any offensive lineman to pull ourselves out, but it was needed for my long-term health.”

The return of Holomalia-Gonzalez is a huge one for the Broncos. With him solidifying the center spot, the Broncos can fit the other returning offensive line pieces into their more natural spots without having to move any of them to center.

Boise State finished 109th nationally in rushing last season at just 120.33 rushing yards per game. That number should go up significantly with a healthy George Holani at running back and Holomalia-Gonzalez running things at center.

How big is getting Holomalia-Gonzalez back? Just ask quarterback Hank Bachmeier.

“It’s just like riding a bike, getting under center with him,” Bachmeier said during the spring. “I’m very excited to have him back. I think he’s going to anchor that offensive line. Really excited being able to get him back.”

The offensive line needs to make big improvements from a year ago, and a healthy Holomalia-Gonzalez should have a big say in making that happen. That’s why he checks in at No. 8 on our list of the most important players to the Broncos in 2022.

One less BSU scholarship football …by Joseph Whitaker12 hours ago