No. 24 on the BNN most important players list for Boise State football in 2022: Punter James Ferguson-Reynolds 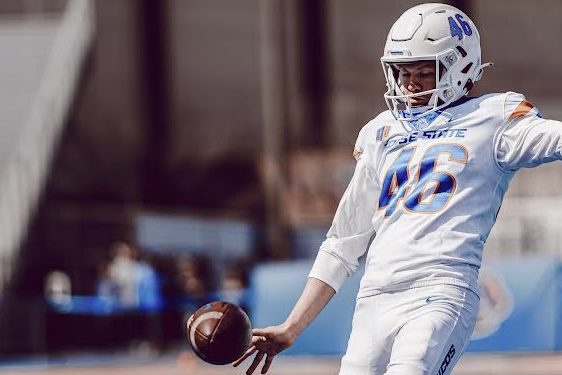 Bronco Nation News is counting down the 25 most important players to the Boise State football team in 2022. Next up in our series is No. 24, punter James Ferguson-Reynolds:

Boise State will have a new punter for the first time since 2018 with the departure of five-year contributor Joel Velazquez.

Both returning backup Gavin Wale and incoming freshman James Ferguson-Reynolds will compete for the spot during fall camp, but for the purpose of this countdown we’re projecting the Australian native Ferguson-Reynolds to win the job.

Ferguson-Reynolds was the No. 10 ranked punter in the 2022 class according to 247Sports. He signed with the Broncos last December and enrolled at Boise State in January. He earned strong reviews during spring practice for his rugby-style punts.

The 6-foot-2, 185-pound Ferguson-Reynolds is a native of Geelong, Australia, where he played Australian Rules Football growing up. He competed with Bannockburn and Bell Park at the junior level before focusing on American football in 2020 and 2021after enrolling at Prokick Australia, an academy designed to help train Australian athletes and prepare them for college football and the NFL.

Ferguson-Reynolds was one of the top Australian punters in the 2022 class and likely wouldn’t have signed with Boise State had he not seen an opportunity for immediate playing time. Boise State, likewise, probably wouldn’t have dipped into Australia – a rarity for them – if they didn’t see him fitting in early in his college career.

Wale had seven punts against BYU as a redshirt freshman in 2020 due to Velazquez missing the game due to COVID, but that’s the only action he’s had in three years with the program. He could beat out Ferguson-Reynolds for the starting spot – and he’d instantly become one of the 25 most important players on the Broncos if he did.

For now we’re going with Ferguson-Reynolds, who could be poised to make an immediate impact with the Broncos this fall. And that’s why he checks in at No. 24 on our countdown of the most important players to the Broncos in 2022.

Authentic Love spells in Cincinna …by Swalihk Musa17 mins ago
Fan Poll
What bowl game would be best for the Broncos?