No. 18 on the BNN most important players list for Boise State football in 2022: Defensive end Shane Irwin 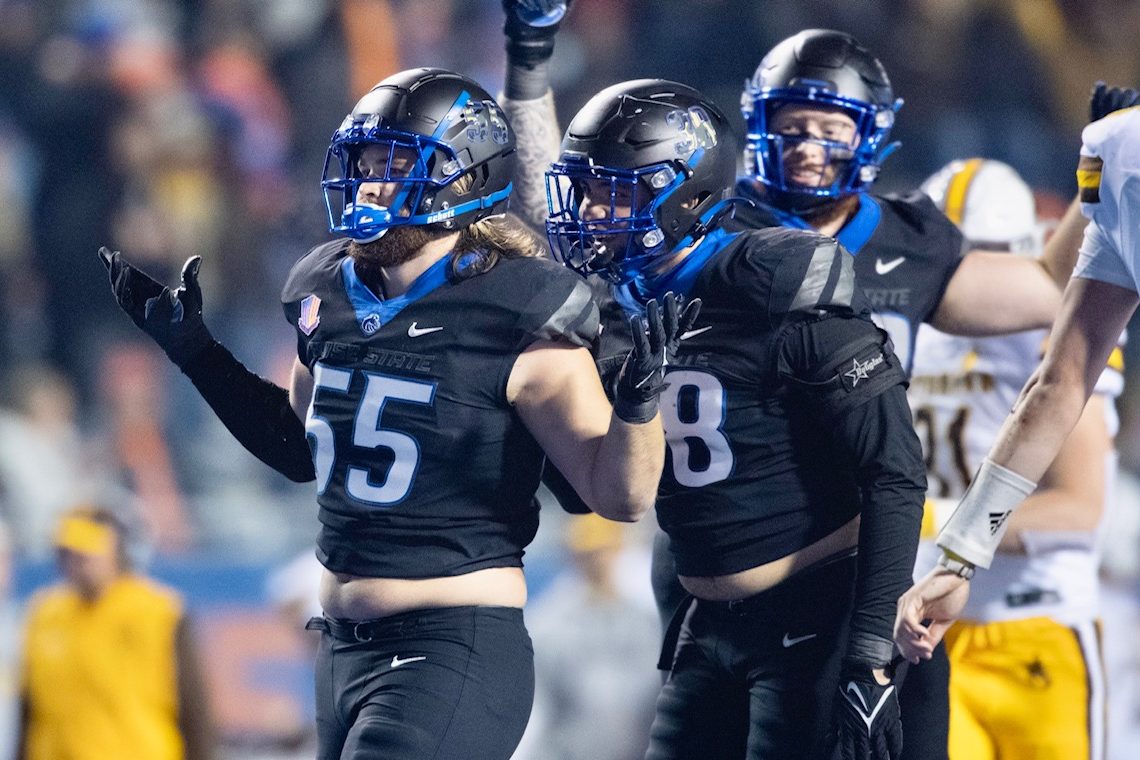 Boise State defensive end Shane Irwin celebrates after making a tackle against Wyoming during a game at Albertsons Stadium in 2021. (Photo by Boise State Athletics)
By B.J. RainsMay 18, 2022

Bronco Nation News is counting down the 25 most important players to the Boise State football team in 2022. Next up in our series is No. 18, defensive end Shane Irwin:

Shane Irwin transferred to Boise State from Long Beach City College expecting to play two seasons with the Broncos and be done with his college career following the 2021 season.

He’s back for an unexpected bonus season in 2022 – and both he and the Broncos are hoping to take advantage of it.

Irwin played his two seasons at Boise State in 2020 and 2021 but elected to take the NCAA up on its offer for an extra year of eligibility due to the 2020 season being altered by the COVID-19 pandemic.

That means Boise State has a veteran leader and a productive player back to help anchor what should be a talented and deep defensive line in 2022.

Irwin has had two solid seasons with the Broncos following his transfer from Long Beach CC. He led the Broncos with six sacks and was second with 7.0 tackles-for-loss in his debut season in 2020 and was a second-team All-Mountain West pick. Last year he had 35 tackles, including 5.0 tackles-for-loss and three sacks.

That’s 65 tackles, nine sacks and 12 tackles-for-loss the past two seasons – and he’s likely to do even more damage this season.

Irwin originally redshirted at San Diego State in 2017 before landing at Long Beach CC in 2018 and 2019. Several Mountain West schools were interested in him including UNLV and San Jose State before he joined fellow Long Beach CC defensive lineman Devine Obichere in signing with the Broncos in 2020.

Typically it takes a junior college player most of the his first season to adjust to playing at the Division I level, and they show great promise in year two. But then they are usually gone, just as they are starting to hit their stride and produce. With Irwin, he now has the extra year to continue to improve and build off what he’s already done at Boise State.

The Broncos badly need to improve their pass rush this season, and Irwin’s return should be a big boost to that. Others including Isaiah Bagnah and Dimitri Washington will be expected to take jumps forward as well, but Irwin has proven to be a steady, reliable contributor that could be ready for his best season yet.

Irwin and the Broncos didn’t expect him to still be around in 2022. But one of the rare positives from the pandemic has allowed him to be back for another year – and it could be a big deal for the defense.

Big things are expected out of Irwin, which is why he checks in at No. 18 on our list of the 25 most important players on the Boise State football team in 2022.