No. 12 on the BNN most important players list for Boise State football in 2022: kicker Jonah Dalmas 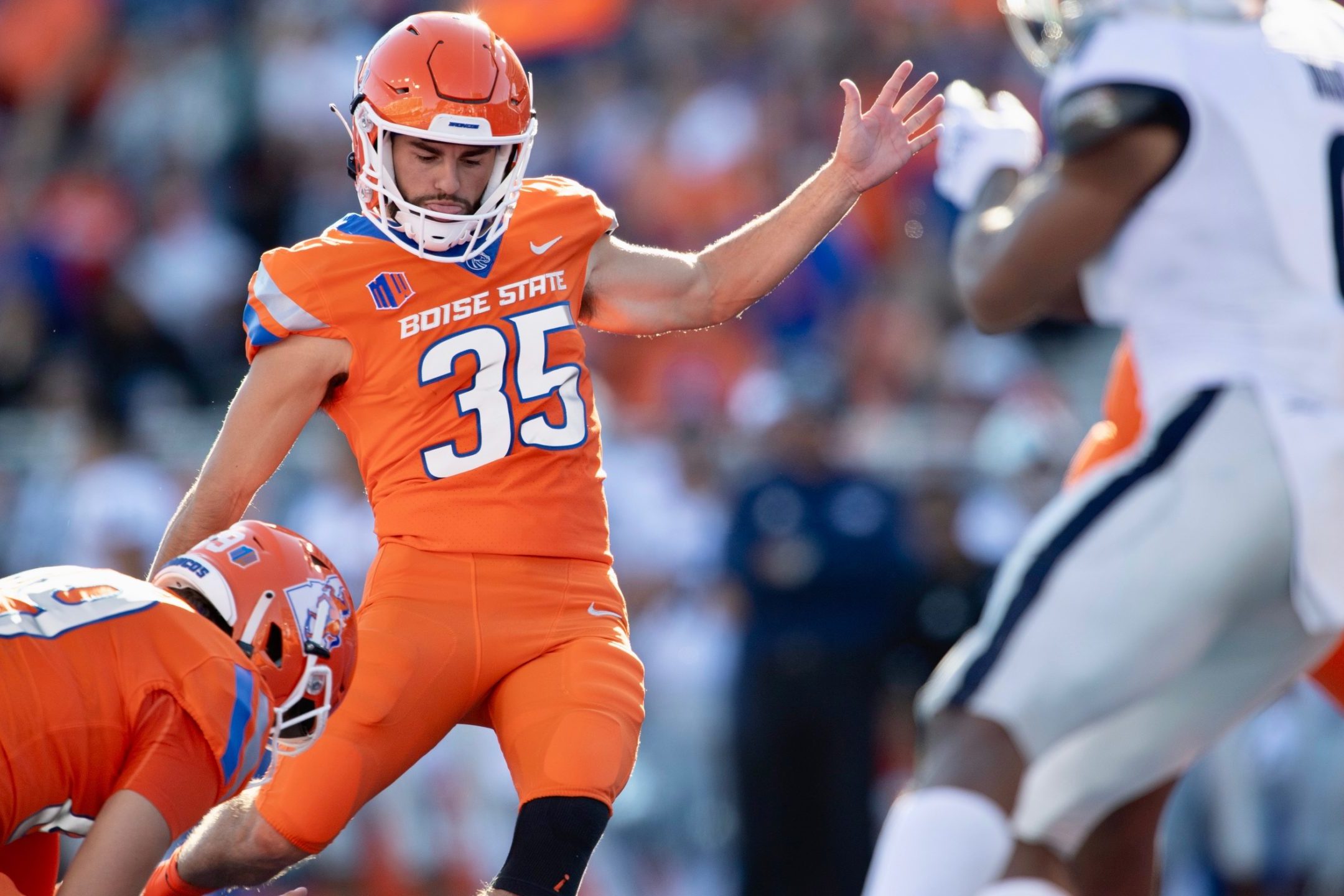 Boise State kicker Jonah Dalmas attempts a kick against Nevada during a game at Albertsons Stadium in the 2021 season. (Photo by Boise State Athletics)
By B.J. RainsMay 26, 2022

Bronco Nation News is counting down the 25 most important players to the Boise State football team in 2022. Next up in our series is No. 12, kicker Jonah Dalmas:

We’re LIVE on a Thursday edition of @BNNBroncoNation LIVE. @MikeFPrater is here for his weekly segment, and Boise State kicker @JonahD17771252 will join us LIVE! Bring your questions and comments! https://t.co/9waL79crYG

No kicker in America made as many field goals as Boise State’s Jonah Dalmas did last season. We’ll see if he can replicate that success in 2022.

Dalmas had one of the best years by a kicker in Boise State history – maybe the best.  He set a school record with 26 field goals – the second-most in Mountain West history – and did so while only missing two attempts all season.

Boise State also only played 12 games, the fewest by far of the top kickers in the country. Dalmas’ 2.2 makes per game average also led the country.

The 92.9 percent clip (26 of 28) ranked seventh in the country. But he had the highest percentage of anyone that attempted at least two field goals per game (2.3).

But there’s more. Dalmas made six of seven attempts from beyond 40 yards and he had five games in which he made at least three field goals. And one of his two misses was partially blocked – a potential game-winning kick late in the fourth quarter against Oklahoma State.

He was named the First Team All-Mountain West kicker at the end of the year – the first Boise State kicker since Tyler Rausa in 2015 to achieve the feat.

It was by all accounts a historic, dream season for the former Rocky Mountain High School All-State soccer star – who continues to write what’s becoming an amazing story.

Dalmas had to record a video of himself kicking and get it to Boise State coaches last summer just to earn a 14-day tryout with the team. He got past that hurdle as well and was invited to join the team as a walk-on. He was so impressive he earned a scholarship before his first year in the program had even ended.

As a true freshman in 2021 Dalmas won the starting spot and went 7 of 8 on field goal attempts and 30 of 31 on PATs. He was named All-Mountain West Honorable Mention.

Dalmas backed it up with a record-breaking sophomore campaign last year – one so good he seriously considered a jump to the NFL because it might be hard to duplicate.

It’s unlikely Dalmas goes 26 of 28 again next season, but the Broncos need him to be a solid, reliable contributor. The offense hopes to be better, which may limit some of his attempts.

But for a team expecting to improve upon last year’s 7-5 record, the Broncos will need Dalmas to again be at an All-Mountain West level. And if Dalmas has hopes of playing in the NFL, he’ll need to back up his 2021 season with another big year this fall.

Kickers are mostly ignored but can play a huge role in a team’s success – Boise State fans may know this better than anyone – and Dalmas appears to be the real deal. It’s a nice luxury for the Broncos to have heading into the season. Dalmas should have a chance to make a major impact for the Broncos again in 2022, and that’s why he lands at No. 12 on our list of the 25 most important players for the Boise State football team in 2022.