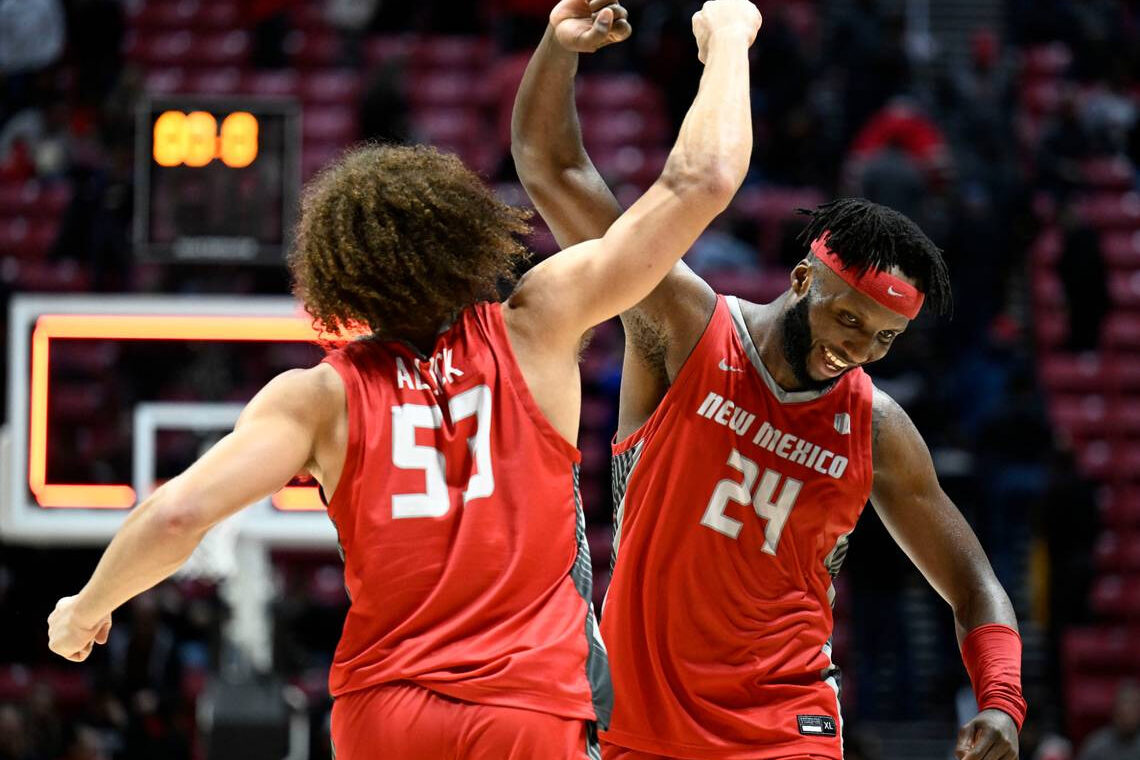 There is no question that from top to bottom the Mountain West is the best it’s been in a long time. With that being said, the top is starting to distance itself from the rest.

Nevada sits at the top of the standings with five wins (5-1) but holds the same amount of losses as Boise State and San Diego State (4-1) along with New Mexico and Utah State creeping back into the mix at 3-2. San Jose State also sits at 3-2 and have started to not only tell, but show the conference that the Spartans are no easy test on the schedule. Although we are only just under three weeks into conference play, New Mexico going into Viejas Arena and taking down San Diego State has opened up the door for every team near the top of the standings. This week’s highlighted matchups include Nevada @ Boise State Tuesday at 7 p.m. MT on the Mountain West Network, UNLV @ Utah State Tuesday at 7 p.m. MT on the Mountain West Network and lastly Boise State @ New Mexico Friday at 9 p.m. MT on FS1 in a standalone conference game at The Pit.

Message to the rest of the Mountain West: Nevada is no fluke. Jarod Lucas and Will Baker have started to take off for the Wolf Pack, a scary sight for opponents when combined with the athleticism of Kenan Blackshear. The Texas transfer Baker has now hit 13 shots from deep this season, an impressive number for the center position. The Wolf Pack face Boise State tomorrow night in a premiere Mountain West conference matchup at 7 p.m. MT on the Mountain West Network with first place on the line. With a win, Nevada could be sitting pretty getting a break for the rest of the week before hosting New Mexico to open next week.

Since losing to Nevada 74-72 in Reno to start conference play, the Broncos have been on a complete tear. Boise State has won four games in a row including winning their last three games against Utah State, UNLV and Wyoming by a combined total of 58 points. With that being said, Leon Rice has repeatedly said that it’s a one game at a time formula and the Broncos need to win the game at hand first before looking forward to the schedule. Boise State will have two tough tests this week, facing Nevada at home and then heading to The Pit to face New Mexico. Tuesday’s winner between the Wolf Pack and the Broncos will determine who sits atop the conference heading into the weekend slate of games.

Mountain West teams were able to take a deep breath following San Diego State’s rare home loss on Saturday to New Mexico, opening the door for other teams in the conference to take first place. Don’t turn your back on the Aztecs though – Viejas Arena was rocking in a big win against Nevada earlier in the week. San Diego State was up double digits before the Wolf Pack made a late run to cut the loss to a minimal number. With the Aztecs making their rounds in Colorado this week against Colorado State and Air Force, I would expect SDSU to take care of business before a home stand.

The Lobos looked to be heading into the decline going into last week, but bounced back in strong fashion with a win over Oral Roberts and a statement win over San Diego State. The duo of Jamal Mashburn Jr. and Mountain West Player of The Week Jaelen House scored 51 combined points in Viejas Arena and made it known to the conference the Lobos won’t back down from any challenge. The Pit will be rocking this week for games against San Jose State and the defending conference champions Boise State.

Even sitting just over .500 in conference play, the Aggies look to be comfortable where they are knowing they still have a month and a half of games ahead. The Aggies took care of business comfortably against Wyoming but fell to Nevada in Reno by 15 points. Utah State actually led for a large portion of the game against the Wolf Pack before going cold in the final seven minutes of play. Utah State will host UNLV and San Jose State this week with a chance to move to 16-4 and 5-2 in conference play, which would surely help the Aggies’ numbers.

With just one game last week, the Spartans notched a 10-point win over Fresno State. Guard Alvaro Cardenas was spectacular in the win, scoring 20 points and dishing out nine assists. Things won’t get easier for the Spartans, hitting the road this week for games against New Mexico and Utah State. Tim Miles has done everything to turn the San Jose State program around, but he will need some extra help to win at The Pit and in Dee Glen Smith Spectrum.

After starting conference play 0-3, Air Force responded strongly with road wins over Colorado State and Fresno State. The Falcons also put up a season-high of 85 points in their win over the Rams. Air Force is favored to beat Wyoming at Clune Arena tomorrow night, something I’m sure nobody predicted to start the season.

Even though New Mexico’s Jaelen House received Mountain West Player of The Week honors this past week, I can guarantee you Isaiah Stevens was at least part of the conversation to be runner-up. The guard scored 33 points for the Rams including hauling in 8 rebounds and dishing out 9 assists in a win over UNLV in Las Vegas. Stevens also hit one of the craziest shots I’ve seen this season with a 3-pointer to send the game to overtime. Let’s hope Colorado State didn’t celebrate the win too hard in Vegas, cause the Aztecs are rolling into Moby Arena for a standalone conference game Wednesday night.

The Bulldogs have lost four out of their last five games, with the sole win now looking like a shocking one over New Mexico. Fresno State has a midweek break in the season before hosting UNLV on Saturday at the SaveMart Center. Given where Fresno State’s numbers are in the NET and KenPom, for the rest of the season fans will hold their breath when their team faces the Bulldogs.

Sitting at a 1-4 record in conference play, on paper it looks like the Runnin’ Rebels are out of the race. With that being said, when buckets are falling UNLV is as good as any team in this conference. Two overtime losses by a combined four points to San Jose State and Colorado State have been the difference between starting 3-2 in conference in comparison to where UNLV currently stands. The Rebels have road games at Utah State and Fresno State in a chance to bounce back with a favorable stretch of games once they get back to Sin City.

Wyoming hasn’t been just the biggest surprise in the Mountain West this season, but also the country. The Cowboys have yet to win a conference game, and there is no guarantee for a win at Air Force or against Colorado State this week. Graham Ike, the Mountain West Preseason Player of the Year, has yet to return this season which has been the biggest reason for some, not all, of Wyoming’s struggles this season. Starting 0-5 in conference play is quite possibly an impossible hole for the Cowboys to dig out of this season.