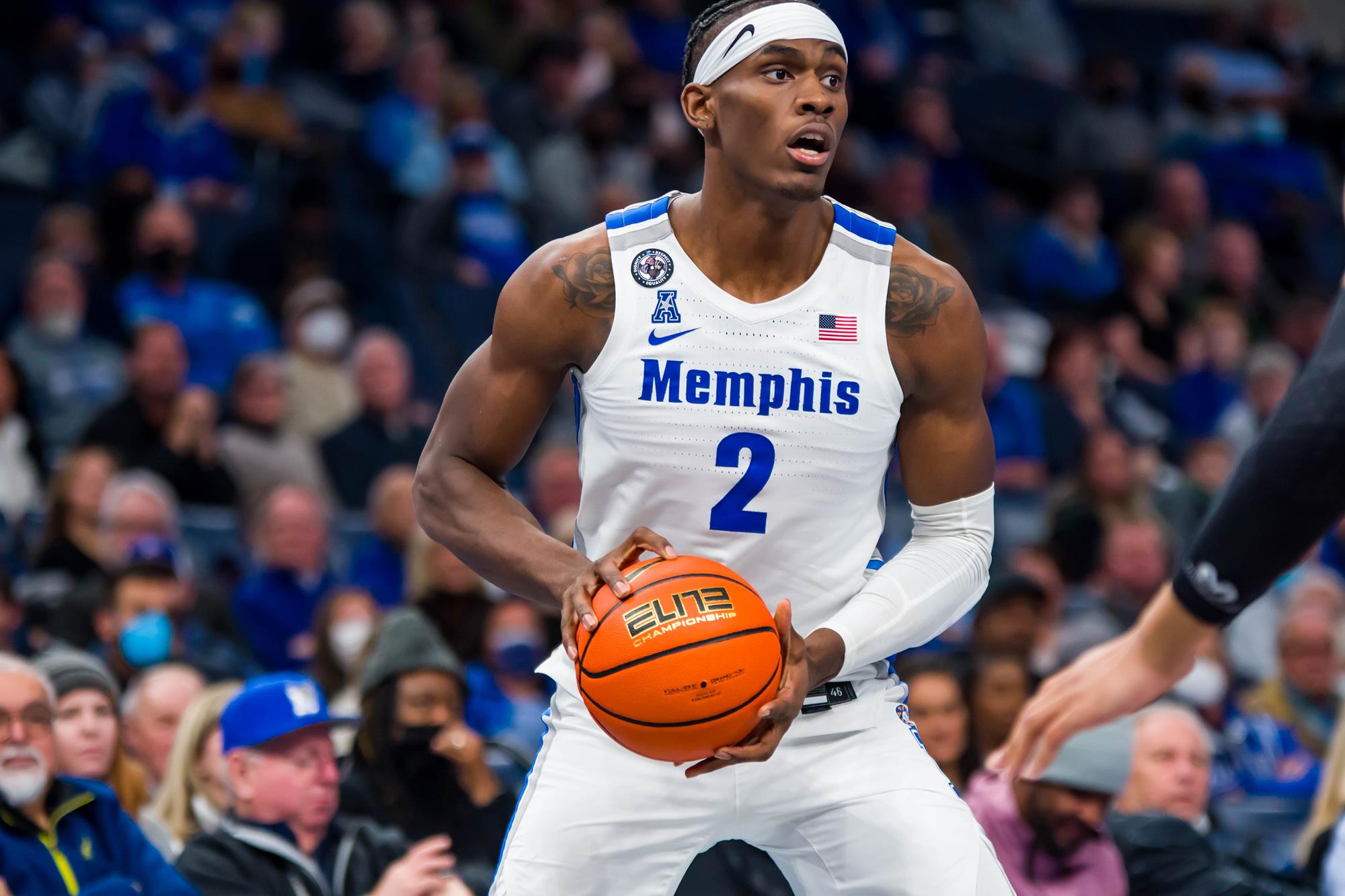 Memphis center Jalen Duren, a potential lottery pick in the 2022 NBA Draft, will provide a big challenge for the Broncos. (Photo by Memphis Athletics)
By B.J. RainsMarch 16, 2022

PORTLAND, Ore. – Boise State coach Leon Rice has found himself enjoying tape of Memphis this week – until he remembered the Broncos are playing them in the first round of the NCAA Tournament on Thursday.

“I’ve caught myself a bunch of times rewinding the tape just for my entertainment on some of their dunks and lobs,” Rice said. “They are an athletic team and they fly around and play really hard.”

The 8th-seeded Broncos will play No. 9 seed Memphis at 11:45 a.m. MT/10:45 a.m. PT on Thursday at the Moda Center in Portland in the first round of the NCAA Tournament.

It’s the first NCAA Tournament appearance since 2015 for the Broncos (27-7), who are entering the tournament with plenty of momentum after winning both the Mountain West regular season and tournament championships. The 27 wins are also a program record.

But none of that matters for the Broncos when the ball is tipped on Thursday, especially given Boise State’s opponent. The Tigers are one of the hottest teams in the country, winners of 12 of the past 14 games, and have a top-10 offense and a top-10 defense nationally since Feb. 1.

“He’s a great player,” Rice said. “He’s one of the best big guys in the country and I’m including Kentucky’s guys in that. The guy is special – but he’s not the only one on that team.”

A big key for Boise State on Thursday? Taking care of the ball. Boise State had 13 turnovers in the first half against Memphis last season but only two in the second half.

“They have a lot of talent on their team and from what I remember it was just really chaotic in the first half,” Boise State guard Marcus Shaver Jr. said. “We just have to play our pace and stick to what we do and not let them speed us up.”

The Broncos are hoping the experience of already seeing the Tigers’ length and athleticism and press defense will help them get off to a better start on Thursday.

“It was a battle,” Rice said. “It starts with their press and the way they fly around and make you turn it over. In the first half we had 13 turnovers and in the second half we calmed down and only had two. We did a really good job not turning it over in the second half.

“They get balls you don’t think they can get, they are quick to the ball, athletic, and then they turn those turnovers into highlight reels at the other end. … They have some great players.”

Another key? Rebounding. Memphis ranks No. 5 nationally in offensive rebounding, while the Broncos are No. 5 in defensive rebounds.

Memphis started 8-9 this season before winning 12 of its final 14 games. Included were two wins against top-10 Houston and an appearance in the AAC title game last Sunday.

The Tigers appear to be peaking at the right time – which could cause some problems for the Broncos.

“They’ve been on a really nice roll lately,” Rice said.

The Broncos hope to end that on Thursday.