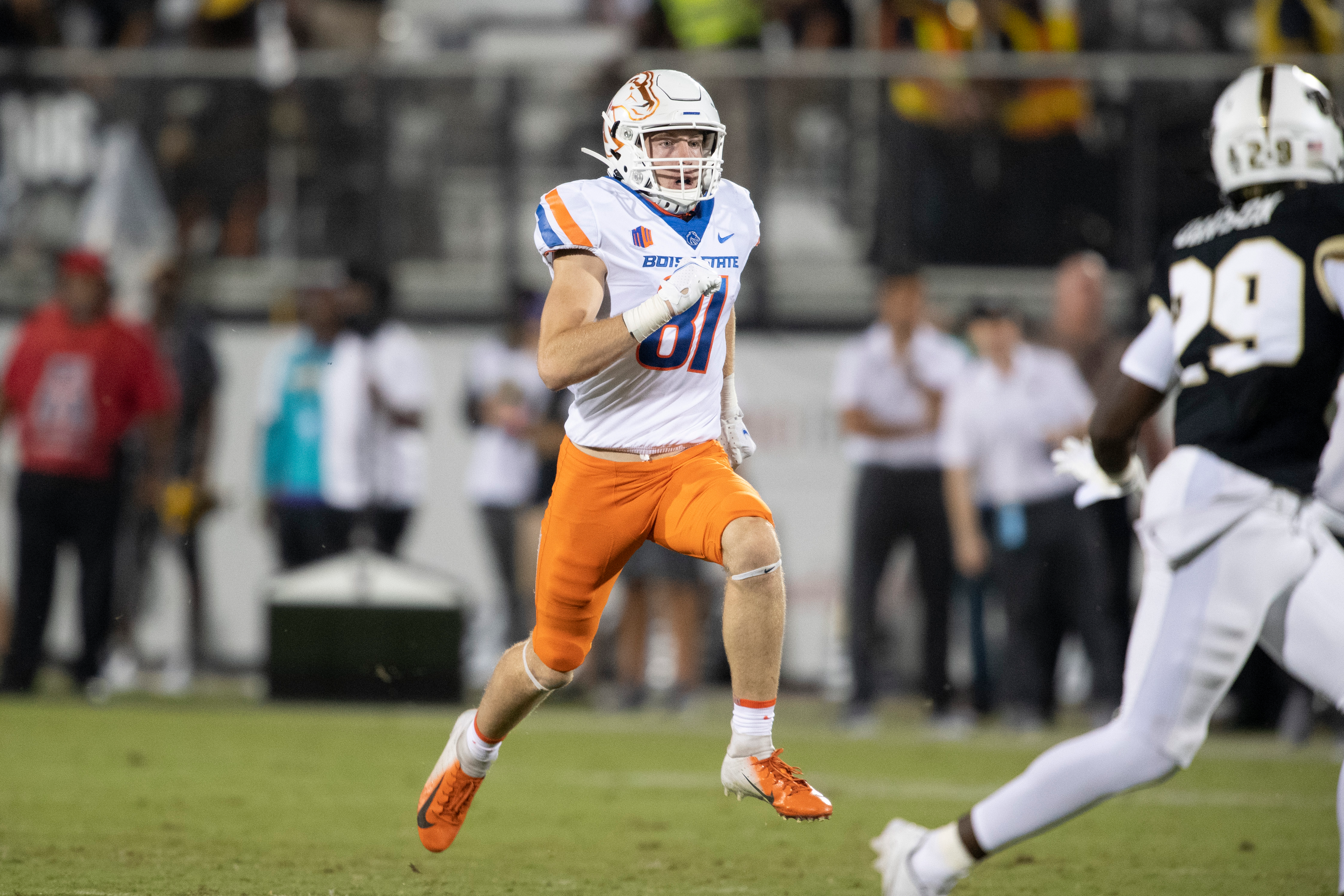 Boise State's Austin Bolt runs down the field on a kickoff during the 2021 season opener at Boise State (Photo from Boise State Athletics).
By B.J. RainsApril 4, 2022

Austin Bolt saw time at practice at tight end, defensive end and wide receiver last season as he tried to find playing time on the Boise State football team. The former Borah High star was so eager to make an impact somewhere, anywhere, that he even flirted with the idea of trying another sport altogether – basketball.

At the urging of basketball players Emmanuel Akot and Abu Kigab after seeing him play a pickup game at NNU, Boise State basketball coaches let Bolt join the Broncos for open gym games last fall. And he impressed enough that Bolt said he was offered a spot to join the team as walk-on while remaining on the football team.

It ultimately didn’t happen and now Bolt says he’s glad it didn’t because he’s more ready to finally be a contributor at wide receiver. But it’s fun to think back to what could have been.

Bolt was the Gatorade Idaho Player of the Year in both basketball and football. He ultimately picked football and signed with Boise State over offers from Utah State and a handful of Big Sky schools.

He averaged 19.4 points and 12.5 rebounds as a senior while leading Borah to the 5A state boys basketball title.

Bolt said he went to NNU to play in a pickup game organized by the Bergersen family. It was there that Akot and Kigab, two starters on the Bronco basketball team, took notice to Bolt’s basketball skills. Bolt said he offered the two a ride home after the game, and it was in the car on the way back when the possibility first came up.

“I played with Akot and he’s the one that got me into the open gym because I held my own against most of those guys,” Bolt said. “I think I was doing pretty well when I was playing with them, and that’s why they offered me a spot on the team.”

For whatever reason it never worked out, and Bolt instead participated in the full winter conditioning program with the football team. He’s made the switch to full-time wide receiver – at least for now – and said focusing on that and only that the past three-plus months has paid off.

“Ultimately this offseason is a big offseason for myself especially since I finally found a role as a wide receiver and it would have been a big distraction with basketball and wouldn’t have let me develop into the player I need to be for this year,” Bolt said. “So it was ultimately a good thing I didn’t play.

“I need to develop as a player and it would be been a distraction with basketball. I wouldn’t be anywhere near where I am right now and it would have been a major setback for my football career. It was definitely a good thing I didn’t play basketball because this offseason has been a huge help.”

Bolt arrived at Boise State in the summer of 2020 with a ton of hype after a historic high school career at Borah. As a senior he accumulated 2,271 yards of offense as a quarterback and had 36 total touchdowns. He had 1,391 rushing yards and 26 rushing touchdowns, and also had two return touchdowns while returning kicks and punts.

But he stepped on campus as more of an athlete than a football player, as he described it, and has yet to make the impact most expected him to make as a true freshman. He redshirted in 2020 and played mostly on special teams last year while bouncing around positions in practice.

Bolt barely got a play off in high school, so barely seeing the field was not something he was used to or ready for.

“Definitely a big change because I was punter, kicker, kicker returner, quarterback – I was playing a lot,” Bolt said. “So it was a big difference to just playing scout team my first year and last year more of a special teams player, but I realized I wasn’t really a great football player and I was more of an athlete in high school. You get exposed here because you can’t do the simple things you can do in Idaho football.

“At the beginning it was a little frustrating but I finally bought into what they were thinking and this year should be a good year for me. I’m just buying into what they are telling me because they know a lot more than I do.”

The 6-foot-3, 215-pound Bolt started his Boise State career at tight end but had trouble gaining enough weight to succeed there. He then went to wide receiver, to defensive end and back to wide receiver the past two years.

He said Monday he never seriously considered transferring despite some frustration.

“It was kind of frustrating for a little bit when I first started moving around positions,” Bolt said. “I stuck it out and I’ve trusted the process and it’s probably my greatest decision because I love playing for the state of Idaho and it was my dream to play on The Blue,” Bolt said. “I think this year I finally get a good opportunity to start making an impact on the offense. I’m glad I stuck it out and trusted the coaches’ process.”

Bolt was sidelined for a few practices this spring with a hamstring injury but has by all accounts been impressive when on the field.

“Austin Bolt has been looking insane,” quarterback Hank Bachmeier said recently. “He’s a local legend here so I know people know him, but the guy…he’s special. We just have to get him dialed in. I’m excited about him.”

Asked what Bolt needed to do to see the field this fall, coach Andy Avalos said, “Just be consistent. He’s doing a nice job when he’s been out there in terms of being able to win one-on-ones and being on the same page with the quarterbacks.”

Bolt is regarded as maybe the fastest player on the team. Given his speed and large frame, he’s an obvious fit as a deep threat on offense – something the Broncos are in search of.

“Right now I think receiver is the best fit for me,” Bolt said. “But there’s a lot of things I still have to fine-tune in my game. … I’m still somewhat new to the position and the little things.

“It’s been a journey but I’m excited to finally hone down on one position and hopefully have a big impact on the team this year.”

The story could get even cooler this fall if Bolt finally gets that chance to see the field at receiver and make contributions to the Broncos. And he’s happy with how things have turned out – though he couldn’t help but think about what might have been while watching the basketball team win the Mountain West and advance to the NCAA Tournament for the first time since 2015.

“Definitely,” Bolt said. “March Madness is a really cool thing and I watch it every year, I’m a big basketball guy, so watching them win a Mountain West Championship was really cool. I like all those guys, I’ve played with them a lot so I texted them all the time.

Bolt and the Broncos will participate in the Spring Game on Saturday at 3:30 p.m. inside Albertsons Stadium. Admission is free and the game is open to the public.

San Diego St BB Threadby BSUaddict24 hours ago
Fan Poll
What bowl game would be best for the Broncos?