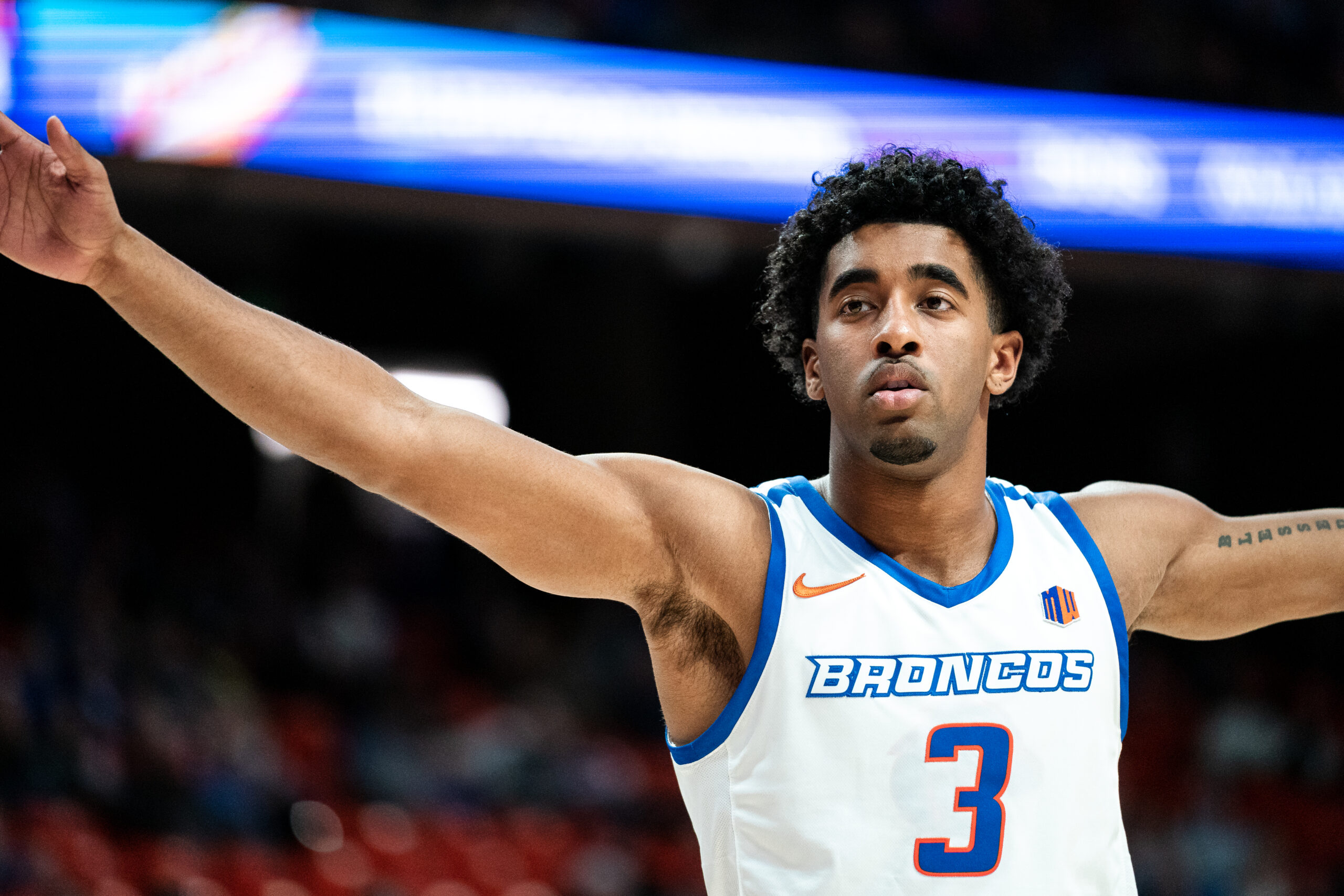 Boise State's Kobe Young had a career-high 16 points on Tuesday night in a 91-50 win over New Orleans. (Photo by Boise State Athletics)
By B.J. RainsDecember 14, 2022

BOISE – Kobe Young had scholarship offers to play football at Army and Central Washington, and had many walk-on opportunities including to play in the Pac-12 at Washington.

The seldom-used redshirt freshman came off the bench and scored a career-16 points to lead the Broncos to an impressive 91-50 win over visiting New Orleans at ExtraMile Arena.

“It felt good,” Young said. “I’ve been waiting a year-plus for this.”

Max Rice had 12 points, Naje Smith added 11 points and Chibuzo Agbo and Mohamed Sylla each had 10 for the Broncos (9-2), who have won eight games in a row and improved to No. 49 at KenPom and No 36 In the NET rankings.

Boise State led 42-28 at the half before using a 24-0 run in the second half to open up a 36-point lead. The Broncos cruised from there, sending the crowd home happy after a dominant performance.

Maybe the most impressive takeaway from Tuesday’s blowout? The Broncos got nearly as many bench points (43) as they did from the starters (48).

“I’ve got six guys on that bench that can play and they are all getting better and that’s the challenge for me but the challenge for them,” Boise State coach Leon Rice said. “What you saw tonight was the way they practiced the last two days. I have to make some tough decisions as a head coach. Keeping 11 guys happy is not my job,

“So to answer your questions or thoughts on why the rotation was the way it was, its the way they practiced….I’m not playing 11 guys. Is’ hard to do. My rotation in the end will be 8-9 but I think with this team it might be a little different where that might rotate, and it might depend on matchups, injuries, and the other team a little bit. I have to make some calls with how they practice. I reward the guys that can keep fighting and practice well. That’s the culture we have.”

Young apparently fits that description. After two strong days of practice – and with Shaver Jr. out injured – he saw the floor the much earlier than usual. And he took advantage of it.

His 18 minutes were so much more than he was used to that he requested a sub late in the second half due to fatigue.

Young was a multi-sport star at Chiawana High School in Pasco, Washington. He played basketball, ran track and was a star wide receiver. But when the Broncos offered him a basketball scholarship more than two years ago, he jumped at the chance.

“My first love was always basketball,” Young said. “That’s what I wanted to do in college.”

After redshirting last year, Young didn’t play a ton through the first 10 games of this season. But that changed Tuesday when he was called upon early in the first half, in part due to an injury to starting point guard Marcus Shaver Jr.

And Young wasted no time, swishing a 3-pointer barely 10 seconds after he had checked in.

“I hit that first one and was like wow, here it goes – this is my night,” Young said. “When I hit the first one, and then the second one, I was just loving it out there. I was hooping.”

Young’s first 3-pointer tied a career high, and he blew past it with another 3 a short time later. He finished 3 of 5 from deep and had a team-high 16 points.

“I was really happy for Kobe because I know he’s going to be a great player,” Boise State coach Leon Rice said. “He’s deserving. … The sky is the limit for Kobe. You saw a peak into his athleticism.”

Boise State is back in action Sunday at 2 p.m. at ExtraMile Arena against Oakland.