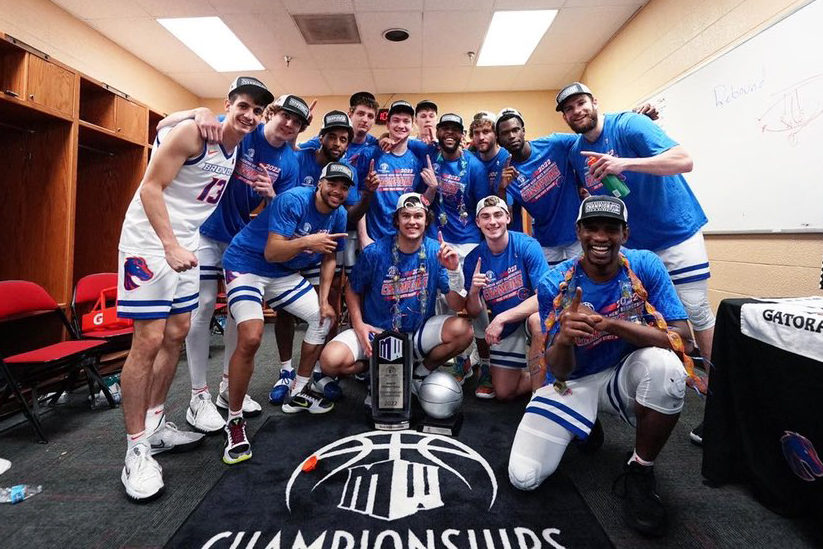 Boise State players celebrate in the locker room after winning the Mountain West Tournament championship on Saturday night at the Thomas and Mack Center in Las Vegas. (Photo by Boise State).
By B.J. RainsMarch 13, 2022

Boise State’s senior leader, always one to look ahead to the next game, had no choice. In front of him on the table sat he Mountain West Tournament Championship trophy and his MVP trophy.

The Broncos, thanks to a last-second defensive stand and a thrilling final minute, backed up their regular season title with a tournament championship with a 53-52 win over San Diego State on Saturday at the Thomas and Mack Center.

“The job is finished now,” Kigab said with a chuckle. “I can smile. These guys just keep fighting. It’s unbelievable. I’m so happy to be part of something like this.”

The Broncos (27-7) added to what’s already been a historic season with win No. 27 – the most in program history.

Tyson Degenhart had 13 points, Abu Kigab had 11 and Emmanuel Akot had 10 points for the Broncos, who again won the game with their defense. San Diego State shot just 35.1 percent from the field.

San Diego State had the ball in the final seconds when Boise State’s defense made the championship-clinching stop. The Aztecs had two shots in the final 15 seconds – but both missed and the Broncos stormed the floor in celebration.

“We really hung our hats on our defense this year,” Degenhart said. “To have it come down to defense, it means a lot to our group.”

Boise State will find out its NCAA Tournament destination at 4 p.m. MT Sunday. Fans are encouraged to join the team at ExtraMile Arena at 3 p.m. for a watch party.

My WILD GUESSES at the 2023 Boise …by BSUaddict11 mins ago