‘It’s not just a regular loss’: Boise State focused on returning to home dominance in opener with UT Martin 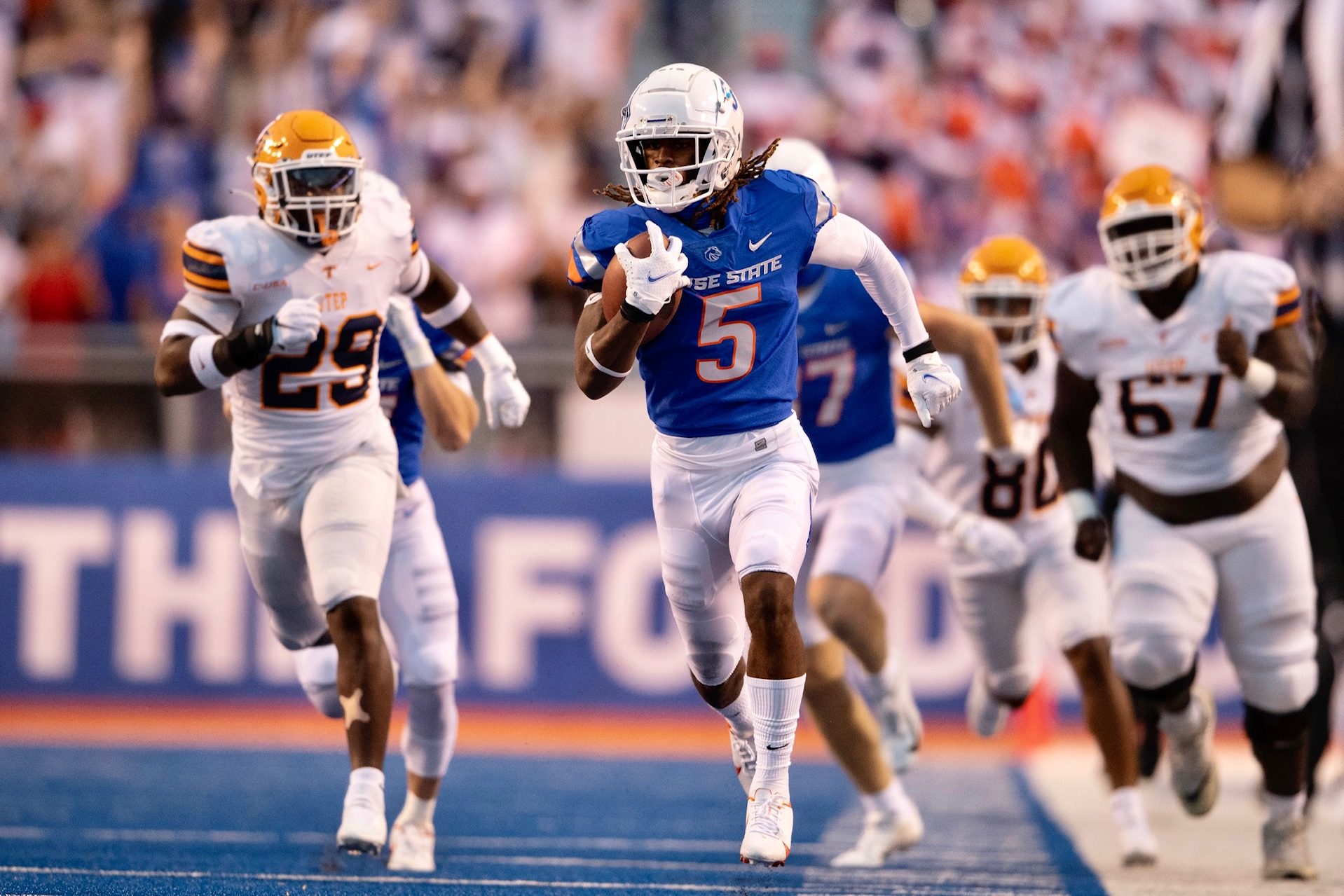 Stefan Cobbs returns a punt for a touchdown against UTEP in 2021. (Photo by Boise State Athletics)
By B.J. RainsSeptember 15, 2022

There were many forgettable things about the debut season of the Andy Avalos era in 2021. The Broncos’ home record was one of them.

Boise State stunningly lost three straight home games for the first time since 1996 on the way to a disappointing 7-5 season.

The Broncos are back in Albertsons Stadium Saturday for the home opener against UT Martin at 2 p.m. And getting off to a good start at home is at the front of their minds.

“The goal of every home game is to protect The Blue and we came short of that a few times last year,” safety Rodney Robinson said this week. “In the offseason the older guys really told us and (helped us) understand what it means to play on The Blue, and the people before us and the pride they took on playing on The Blue. On Saturday we have to come out with that same pride and protect The Blue.”

Boise State is 125-13 at home since 2000 (90.6 percent), which is still a crazy good record and the second-best nationally to Oklahoma. But the Broncos used to be the winningest team at home before the recent losses dropped them below the Sooners.

The Broncos were 123-10 at home since 2000 prior to losing the three straight last season, but they did finish with a pair of wins at home later in the season and bring a two-game home winning streak into Saturday’s game with UT Martin.

“I can’t rattle off what are exact home record is off the top of my head but I know it’s an elite level of wins compared to losses and that definitely dipped last year,” left guard Garrett Curran said. “That’s something I wasn’t proud of. There’s things within this program that I take personal and protecting The Blue is absolutely one of those things.”

It wasn’t just bad last year. It was historic. Boise State lost three consecutive home games for the first time in 25 years. And it’s a trend that has been going in the wrong direction.

Boise State had a crazy 55-2 stretch at home from 2006 to 2015 before losing back-to-back home games to Air Force and New Mexico. The loss to the Lobos came as 30-point favorites, making it one of the biggest upsets in college football history point-spread wise. Having it come in Boise made it even harder to believe.

Teams used to show up in Boise knowing they had no chance to win. Last year proved that’s no longer the case. At least for now.

After Saturday’s game against UT Martin the Broncos have two huge home games against San Diego State (Sept. 30) and Fresno State (Oct. 8) which could decide the fate of their season. Taking care of business at home this year is as important as ever. A spot in the championship game could be on the line.

And that’s why the Broncos used the three home losses as motivation during the offseason, knowing things needed to change this year.

“It sat with us bad,” Robinson said. “Me being a young guy you don’t really understand it but once you see the looks on the older guys faces, it’s not just a regular loss to them. The people that played here before, they take pride in playing on The Blue and in front of these fans and protecting The Blue, so that’s what we’ll do on Saturday.”

Typically an FCS opponent coming into Boise would be prime for a let-down game for the Broncos. With some big games on tap it would be easy for college kids to look past UT Martin and lose their focus.

Last year’s home struggles combined with some weird Mountain West scores last week make that scenario less likely. The Broncos saw Utah State lose at home to Weber State and Nevada lose at home to Incarnate Word last Saturday. They are out to not let that happen to them.

“In college football these days, just from last weekend we saw a bunch of things happen,” tight ends coach Nate Potter said. “Here’s the bottom line with it comes to that. This team is talented. They have guys who will play in the NFL. At the end of the day it’s about our preparation and our process to understand the things we need to do I this game to be our very best.”

And that starts with protecting The Blue.

Subscriber video series: Three-star DB commit Franklyn Johnson Jr. plans to ‘give it all I got’ at Boise State
December 16, 2022

Stats are down, but Boise State’s JL Skinner ‘having a great season’
November 2, 2022