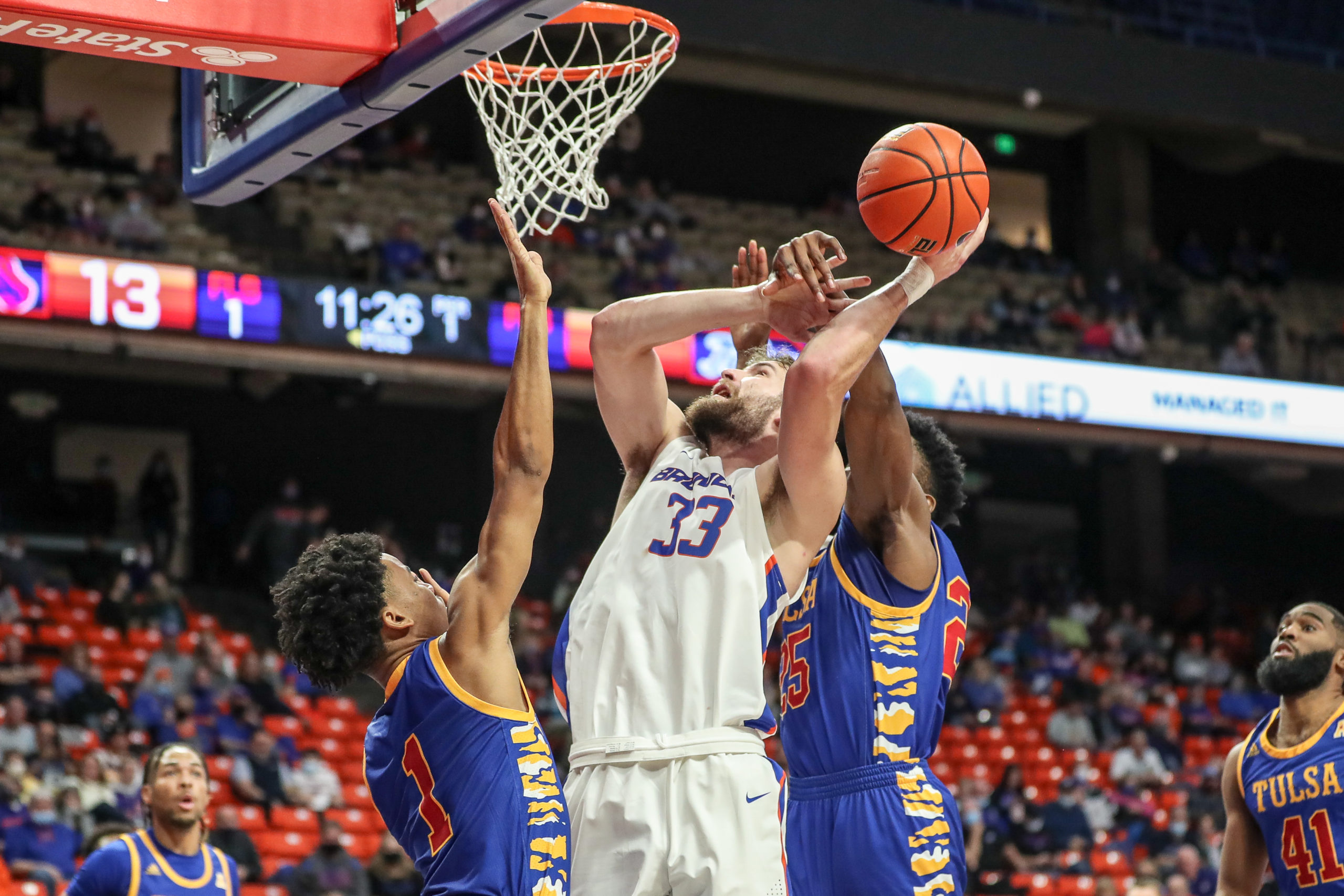 Boise State's Mladen Armus puts up a shot against Tulsa on Dec. 3, 2021, at ExtraMile Arena in Boise (Photo by Loren Orr/LorenOrr.com).
By B.J. RainsDecember 7, 2021

The Boise State men’s basketball team will be back in action tonight for a nonconference road game at CSUN. Game time is slated for 8 p.m. MST and it will be streamed on ESPN+.

The Broncos (4-4) are looking to win a second straight game after taking down Tulsa in come-from-behind fashion last Friday.

One thing the Broncos must do better? Take care of the ball. The Broncos had 24 turnovers against Tulsa, the most in 12 years with Leon Rice as head coach.

Boise State also must start making some free throws. The Broncos rank dead last in the country – 350 out of 350 qualifying teams –  in free throw percentage at just 55.6 percent. Boise Sate made just 8 of 16 in the win over Tulsa after previously making 12 of 26 from the charity stripe in an 86-82 overtime loss to Saint Louis.

The Broncos are 8-0 all-time against CSUN, including a 103-72 blowout win in Boise two years ago. Abu Kigab had a career-high 33 points in that game.

Bronco Nation News will have a reporter at the game tonight to provide complete coverage. Live pregame and postgame shows will stream on the BNN social media channels before and after the game.

Here’s the official game notes from Boise State’s sports information department to help get you set for tipoff:

Boise State men’s basketball hits the road again for a Tuesday night game against CSUN, at the Matadome. Tipoff is slated for 7 p.m. PT/8 p.m. MT, and will be available on ESPN+.

WATCH LIVE: Friday’s game will be live streamed on ESPN+.

LISTEN LIVE: Radio coverage of the game will be broadcast on the Bronco Radio Network, including flagship station 670 AM KBOI in Boise, and online through the Varsity Network. Coverage begins at 7:30 p.m. MT.

ABOUT CSUN: The Matadors are 3-4 on the year, but have won three of their last four games. Nine different Matadors are scoring at least 4.7 points per game, led by Atin Wright’s 10.2. Former Bronco Trent Johnson is leading the Matadors this year as the team’s interim head coach. Johnson played from 1974-78, helping lead Boise State to its first NCAA Tournament appearance in 1976. He finished his career with 1,155 points and 702 rebounds – still ranking 16th and fifth in Boise State history, respectively.

SERIES HISTORY: Boise State leads the all-time series against CSUN 8-0. The Broncos are 3-0 against the Matadors during Leon Rice’s 12 seasons as head coach. The last meeting was Dec. 28, 2019, a 103-72 Boise State victory at ExtraMile Arena. Abu Kigab made his home debut in the game, scoring a career-best 33 points and grabbing 11 rebounds. Boise State is 2-0 on the road in the series, last visiting in 2006.

STAT STUFFER: Marcus Shaver, Jr. paced the Broncos Friday against Tulsa, leading the team in points (17), rebounds (8) and assists (7). He is one of 14 players nationally to post those figures in each stat column in a game this year and the first Bronco to do so since Chandler Hutchison’s triple-double against Portland exactly four years prior (Dec. 3, 2017), a game in which Shaver played for the Pilots.

CALLING CARD: Boise State head coach Leon Rice claimed before the season that the 2021-22 Broncos had a chance to be the best defensive team in his 12 years as head coach. Through seven games, they have made good on that prediction. Boise State is holding opponents to 60.4 points per game. The Broncos have held seven opponents to fewer than 70 points and five under 60.

Which of the newest additions are …by Bronco74546 hours ago