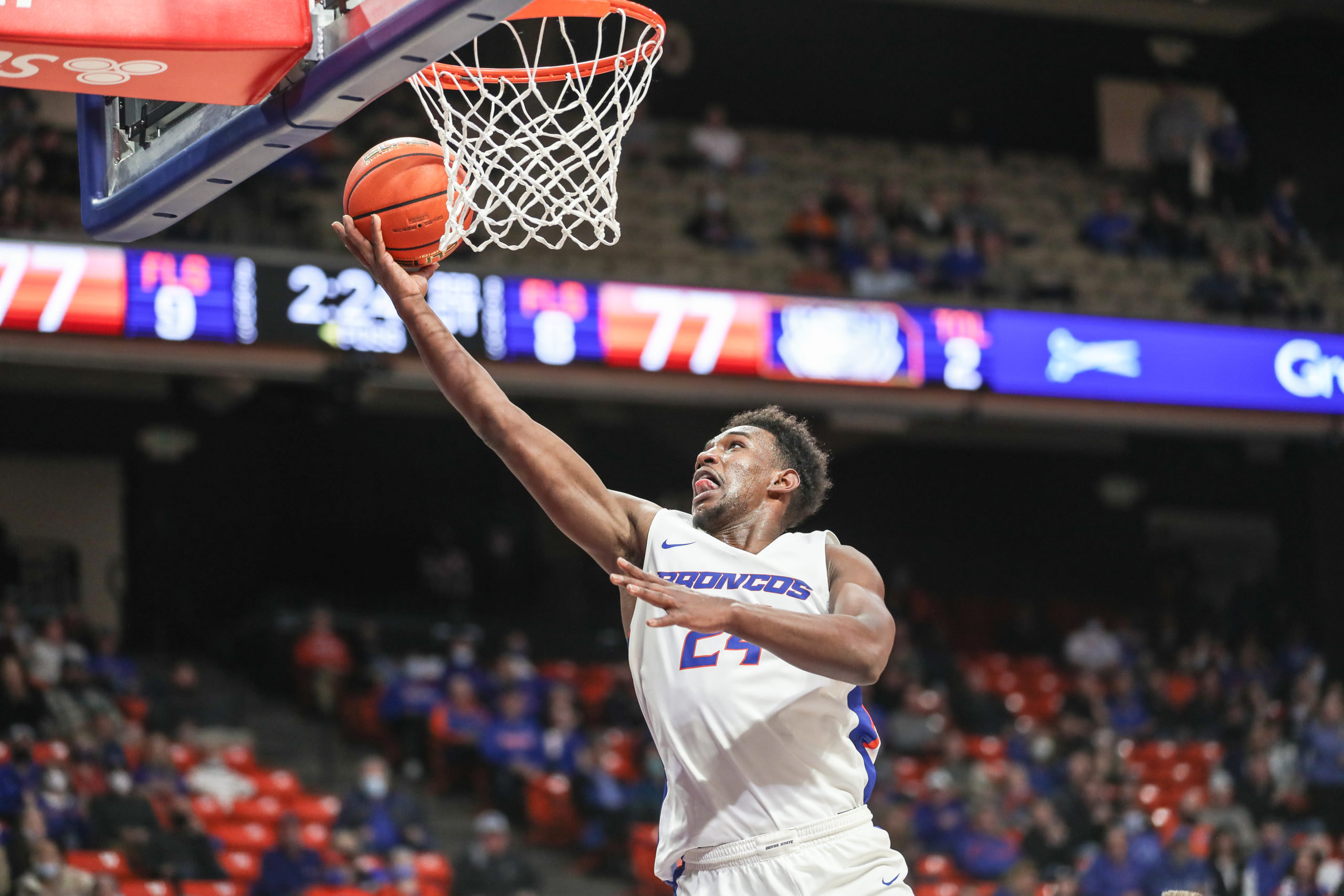 Boise State's Abu Kigab soars towards the basket in the second half against Saint Louis Tuesday night at ExtraMile Arena. The Broncos lost in overtime, 86-82. (Photo by Loren Orr/Loren Orr Photography)
By B.J. RainsDecember 1, 2021

Boise State coach Leon Rice didn’t beat around the bush after a 86-82 overtime loss to Saint Louis on Tuesday night, addressing what cost his team the game right at the start of his postgame press conference.

“We all know the elephant in the room is the free throw line,” Rice said.

Boise State went a putrid 12 of 26 from the foul line in the four-point loss.

“It’s such a fine line when you are playing good teams,” Rice said. “In these close games against good teams, you have to be able to make those.”

The 46.2 percent mark at the foul line was the worst in 12 years under coach Leon Rice when the Broncos attempted at least 25 free throws in a game.

Saint Louis, meanwhile, made 30 of 34 shots from the charity stripe.

“The game lived up to the hype as far as two good teams, but the thing you can’t overcome is one team made 30 free throws and the other team made 12,” Rice said. “That’s really, really hard to overcome, and I don’t know how many of those were 1 and 1s too.

“You’re leaving at least (16) points on the board against a good team – and we almost overcame it.”

But it wasn’t just a one-game issue for the Broncos. Free throw shooting has been a big problem all season. The Broncos entered the game ranked 346th of 358 Division I teams at just 59.3 percent from the line.

That number actually somehow got worse on Tuesday – and it cost the Broncos a game in the process.

It was just the 11th time since Rice arrived in Boise that the Broncos shot less than 50 percent from the line – but it’s already the third time this year it’s happened. The Broncos are 2-9 when that’s happened, and both wins came earlier this year against Temple and Ole Miss.

“Right now we’re just missing,” senior Abu Kigab said. “It’s part of the game and we just have to keep shooting them. … It happens. Some of the best teams, they lose because they are missing free throws uncharacteristically, but I have faith we’ll make them.”

Believe it or not this wasn’t Boise State’s worst outing from the line this season. The Broncos went just 6 of 14 (42.9 percent) in the win over Temple in the Charleston Classic on Nov. 19.

The Broncos were 10 of 21 against Ole Miss and 7 of 13 in last Friday’s bad loss to CSU Bakersfield.

Kigab himself was partly to blame on Tuesday. He had a game-high 27 points and made some huge shots to keep the Broncos in it – but also went just 5 of 11 from the foul line. He missed two free throws in the final seconds.

“There’s nobody in the country that shoots more free throws than him in practice on his own,” Rice said. “It’s almost like I might have to go straight line in the opposite direction and get him not to shoot any for a while and let him do some mental work and let the air out of the balloon because it’s strung pretty tight right now I think.

Rice said the Broncos shoot “a lot better” from the foul line in practice, which gives him confidence it will soon turn around.

“No doubt,” Rice said. “They don’t shoot 40 percent. I know they can fix it. When the numbers end, when the year ends, Abu’s numbers will correct. He’s too good and he spends too much time doing it.”

Added freshman Tyson Degenhart, who had 12 points and six rebounds in his first career start but missed his only free throw attempt, “We just have to get back in the lab and keep shooting them because with this game we miss 14 and if we make a couple of those we win the game.

“Once we start knocking them down I think we’re going to win a lot of games.”

As for the game itself, the Broncos were in great position to win had they just hit a few more from the foul line. The Broncos shot 46.3 percent from the field overall, grabbed 14 offensive rebounds and had just 10 turnovers.

But in the end it’s a second straight loss for the Broncos, who will be back in action Friday night at home at 7 p.m.

Boise State has played a tough schedule in the early going. The Broncos have already played four teams ranked in the top 100 at KenPom – but they are just 1-3 in those games.

“I scheduled like this on purpose,” Rice said. “To build us for the end. I wouldn’t do that with a young team because it’s tough and it’s night after night, but it’s forcing us to face issues and get better and we’re going to. I’ve got resilient guys that care about each other and are going to battle.”

They’ve just got to start making some free throws.

My WILD GUESSES at the 2023 Boise …by BSUaddict26 mins ago